Iran: One Month to Decide on Penalties for the Iranian Regime’s Terrorist Foreign Policy 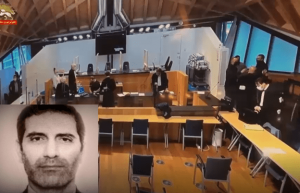 A verdict is expected before the end of December in the case against Iranian regime diplomat Assadollah Assadi, which began on Friday. Assadi and three co-conspirators are accused of plotting to set off explosives at a gathering of the National Council of Resistance of Iran that was held just outside Paris in June 2018. They could each face between five and 20 years’ imprisonment in Belgium, while the entire Iranian regime could face consequences from having certain aspects of its terrorist activity exposed before a court of law for the first time.
Assadi is the first Iranian diplomat to be formally prosecuted for terrorism-related charges, but many of the regime’s diplomats frequently have a role to play in malign activities that are often channeled through militant proxies. In the immediate aftermath of Assadi’s arrest, a spokesperson for the Belgian judiciary declared that “practically all” employees of Iranian consular services are actually members of the regime’s secret service. In that capacity, they are no doubt charged with providing logistical support to non-state actors that are tasked with informally pursuing Tehran’s objectives abroad.

1) For the first time, a career diplomat was arrested for transferring a bomb in a flight from #Iran to Europe & hand-delivering it to terrorists he trained for years. Asadollah Assadi also supplied a large amount of money & personally visited the targeted site in a recon mission

This has been all but confirmed by the investigation’s leading up to today’s court hearing. Both the Belgian state security service and the French government have issued public statements affirming that there is evidence to show that the 2018 terror plot was undertaken at the direction of high authorities within the theocratic regime. The National Council of Resistance of Iran said that both President Hassan Rouhani and Supreme Leader Ali Khamenei had a hand in ordering the would-be attack.
It strains credulity to suggest that such high-ranking officials would involve themselves in an operation that was being led by one of their diplomats after having previously avoided involvement in terrorist operations for which those diplomats merely acted as intermediaries. The NCRI has long sought to bring international attention to a terrorist infrastructure that includes Iranian embassies and consulates and was put into place quite deliberately by the regime’s leadership.
Arguments to that effect have won over a wide range of political allies in the United States, Europe, and elsewhere. This was evident from the presence of hundreds of those allies at the 2018 “Iran Freedom” rally. Speakers at the event included current American and European lawmakers, former government ministers, and at least one former ambassador to the United Nations. Any number of these dignitaries could have been killed if European authorities hadn’t disrupted Assadi’s terror plot and recovered the bomb which was capable of killing hundreds if not thousands of attendees.
The details that emerged about the plot even before the trial should have been sufficient to make the case highly personal to government leaders throughout the Western world. Unfortunately, their responses have been relatively muted so far. Robert Joseph, a former official in the US state department and a participant in the 2018 rally, noted in an affidavit that the continuation of this silence would pose a danger to all parties involved. “If the leaders of free societies fail to hold the perpetrators responsible, we will only encourage more attacks and be complicit in them,” he told the Belgian court. Make no mistake, when Joseph referred to “the perpetrators,” he was not merely referencing Assadi and his fellow defendants, each of whom are virtually assured conviction on the basis of publicly available evidence. Rather, he was urging Western policymakers to demand similar accountability from the entire system that laid the groundwork for the terror plot. That sentiment has been echoed by countless other supporters of the NCRI, both in the form of affidavits and in remarks delivered to virtual conferences that the Resistance coalition has hosted in the run-up to today’s trial.
When hearings conclude in that trial, a clock will start ticking for policymakers who represent countries at risk of being affected by Iranian terrorism. They presumably have until the end of December to arrive at some decision about how they will follow-up on whatever punishment is given to the four agents who played a direct role in 2018’s attempted attack. Their options include expanded human rights sanctions as well as a range of diplomatic penalties, perhaps the most radical of which is the outright closure of Iranian embassies throughout the Western world.

The European Union and member states are being judged by the court of public opinion to end the policy of silence vis-à-vis the regime’s terrorism and adopt a decisive policy towards Iran’s medieval regime. This decisive policy must include following steps:#Iran pic.twitter.com/hqnQkxhBwo

This latter option is sure to meet with widespread opposition, but it should not be discounted, least of all by those policymakers who recognized Iran as the world’s leading state sponsor of terrorism but didn’t realize that the regime would openly target a pro-democracy gathering attended by tens of thousands of men, women, and children, many of whom hold American or European citizenship.
Revelations about this ruthlessness are accompanied, in the present case, by equally damning revelations about the regime’s practice of using its diplomatic infrastructure and personnel to facilitate terrorist activity. The relevant evidence cannot be ignored. And regardless of how radical it may seem to suggest severing all diplomatic ties with the Iranian regime, it is much more difficult to dismiss such a proposal when it is so plainly in line with the interests both of Western nations and of the Resistance movement that is working to establish true democracy in Iran.