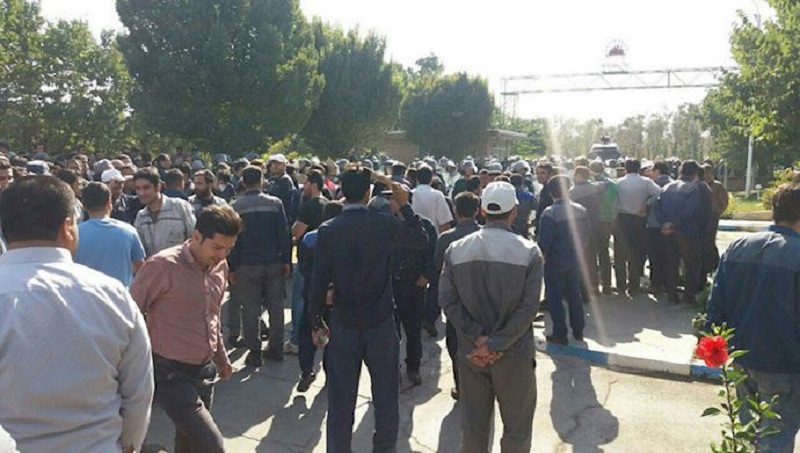 There were 204 protests in 59 cities, and 24 provinces across Iran during October, according to reports from the Iranian Resistance, working out at an average of seven protests per day.

As always, we will look at the protests by sector.

There were 103 protests by workers, across 29 cities, commercial areas, and industrial towns in 18 provinces. This was an average of three protests per day.

The most significant protests were held by workers of AzarAb Industries in Arak, who were demanding their outstanding wages and an end to the privatization that they say has ruined the business.

Dozens of peacefully protesting workers were beaten and arrested by the security forces, with images of their injuries going viral on social media. The police even attacked the factory where workers had taken refuge, breaking the front windows, shooting the security cameras, and forcing the workers out with tear gas.

AzarAb workers during their peaceful protests. Many were injured with bloody faces and bodies published on social media platforms. The Arak prosecutor confirmed that 21 AzarAb workers were arrested, but this should be considered a minimum.

In Shush, Haft Tappeh Sugarcane factory workers went on strike again to demand the reinstatement of 20 fired employees, an end to the persecution of workers, and the reversal of privatization.

Those defrauded by various regime-affiliated credit institutions, including the Caspian Credit Institute, the Samen al-Haj institute, and the Mehr Housing project, held six protests across four cities and three provinces.

Teachers held three gatherings in three cities and provinces. In Lorestan, they protested changes in their job status and in Isfahan and Tabriz they demanded their outstanding wages.

Bazaar merchants and shop owners held three protests in Tehran to protest new directives for the stock market that resulted in losses and the regime’s monopoly of the cell phone market.