H.Res.752 U.S. Congress in support of the Iran protests

Written by Mahmoud Hakamian on 11 December 2019.

Bipartisan lawmakers on Tuesday introduced a resolution in the United States House of Representatives supporting the nationwide Iran protests and urging the U.S. Administration to work to convene emergency sessions of the United Nations Security Council and the Human Rights Council to condemn the deadly crackdown on protesters by the regime.

House Resolution 752, “Supporting the rights of the people of Iran to free expression, condemning the Iranian regime for its crackdown on legitimate protests, and for other purposes,” was introduced by Rep. Theodore E. Deutch (D-FL) and Rep. Joe Wilson (R-SC).

The draft bill points out that on November 15, 2019, popular protests against the Iranian regime began and rapidly spread throughout the country.

The Iran protests began in response to an announced increase in the price of fuel and protesters have expressed numerous economic grievances, the text said.

It pointed out that the Iranian regime’s security forces have used lethal force in arresting more than 7,000 people and have killed hundreds of protesters.

"Reports indicate that Iranian Government authorities have, in many instances, refused to return victims’ bodies to their families and that security forces have removed bodies from morgues and transferred them to unknown locations,” the text said.

"On November 16, 2019, Iranian authorities began implementing a near-total shutdown of internet services, stopping nearly all means of online communications for people inside Iran, to preclude the sharing of images and videos of deadly violence being used by security forces.”

“On November 18, 2019, Iran’s Islamic Revolutionary Guard Corps deployed to the city of Mahshahr and engaged in mass repression, reportedly killing as many as 100 people.”

The draft bill further pointed out that the “Iranian regime was implicated in a June 2018 terrorist plot against a meeting of Iranian opposition activists in Paris.”

“Iran’s Islamic Revolutionary Guard Corps and its Basij militia have been sanctioned by the United States for planning and carrying out serious human rights abuses against the Iranian people, including for the cruel and prolonged torture of political dissidents.”

“The regime has routinely violated the human rights of Iranian citizens, including by implementing ongoing, systematic, and serious restrictions of freedom of peaceful assembly and association and freedom of opinion and expression, including the continuing closures of media outlets, arrests of journalists, and the censorship of expression in online forums such as blogs and websites.”

The text pointed out that on November 18, 2019, U.S. Secretary of State Mike Pompeo stated that, “The United States is monitoring the ongoing protests in Iran closely. We condemn strongly any acts of violence committed by this regime against the Iranian people and are deeply concerned by reports of several fatalities … The Islamic Republic must cease violence against its own people and should immediately restore the ability of all Iranians to access a free and open internet.”

The lawmakers added that the Iranian regime has a long history of violent repression of dissent, including

"In 1988, the Iranian regime carrying out the barbaric mass executions of thousands of political prisoners by hanging and firing squad for refusing to renounce their political affiliations and in some cases for possessing political reading material, including prisoners of conscience, teenagers, and pregnant women.”

“Beginning in December 2017, and continuing for several months after protests erupted in more than 80 cities, the Iranian regime suppressing such protests with repressive force that resulted in at least 25 deaths and 4,000 arrests.”

It added that on January 9, 2018, the House of Representatives overwhelmingly passed H. Res. 676, a resolution supporting the rights of the people of Iran to free expression and condemning the Iranian regime for its crackdown on legitimate protests.

The draft text resolves, that the House of Representatives:

(1) stands with the people of Iran that are engaged in legitimate and peaceful protests against an oppressive, corrupt regime;

(3) commends the statements of support for the protesters from the executive branch and key allies;

(4) calls on all democratic governments and institutions to clearly support the Iranian people’s right to live in a free society;

(5) demands that the Iranian regime abide by its international obligations with respect to human rights and civil liberties, including freedoms of assembly, speech, and press;

(7) encourages the Administration to expedite the license of communications technology to Iran to improve the ability of the Iranian people to speak freely;

(8) calls on companies to reject requests by the regime to cut off the Iranian people from social media and other communications platforms;

(9) respects the proud history and rich culture of the Iranian nation and fully supports efforts by the people of Iran to promote the establishment of basic freedoms that build the foundation for the emergence of a freely elected, open, and democratic political system;

(10) supports the right of Iranian dissidents to assemble, without fear of persecution and violence, whether in Iran or internationally; and

(11) urges the President and the Secretary of State to work with the international community to ensure that violations of human rights are part of all formal and informal multilateral or bilateral discussions with and regarding Iran. 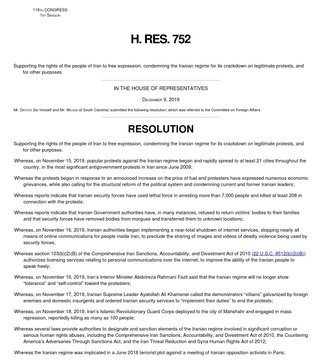 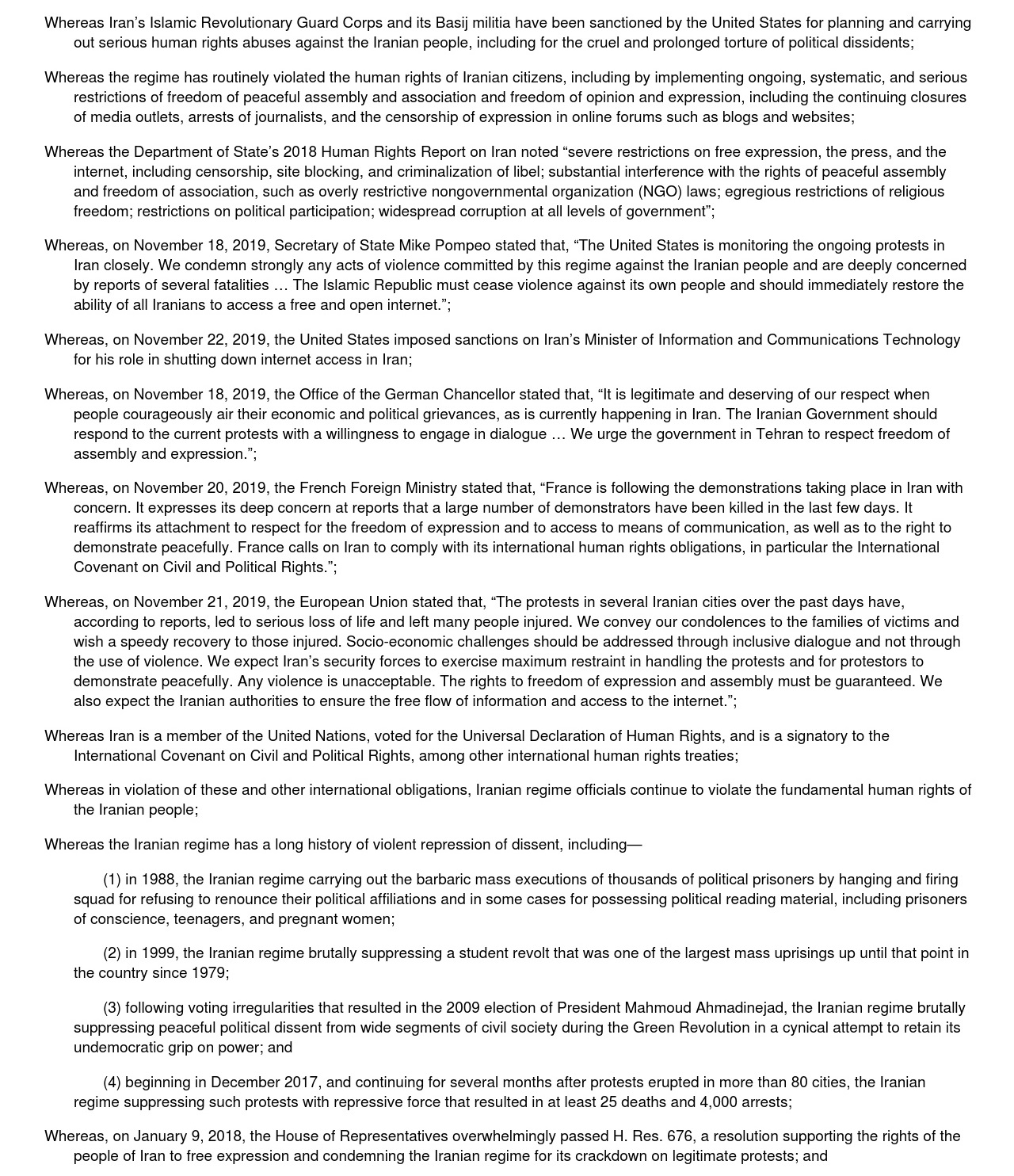 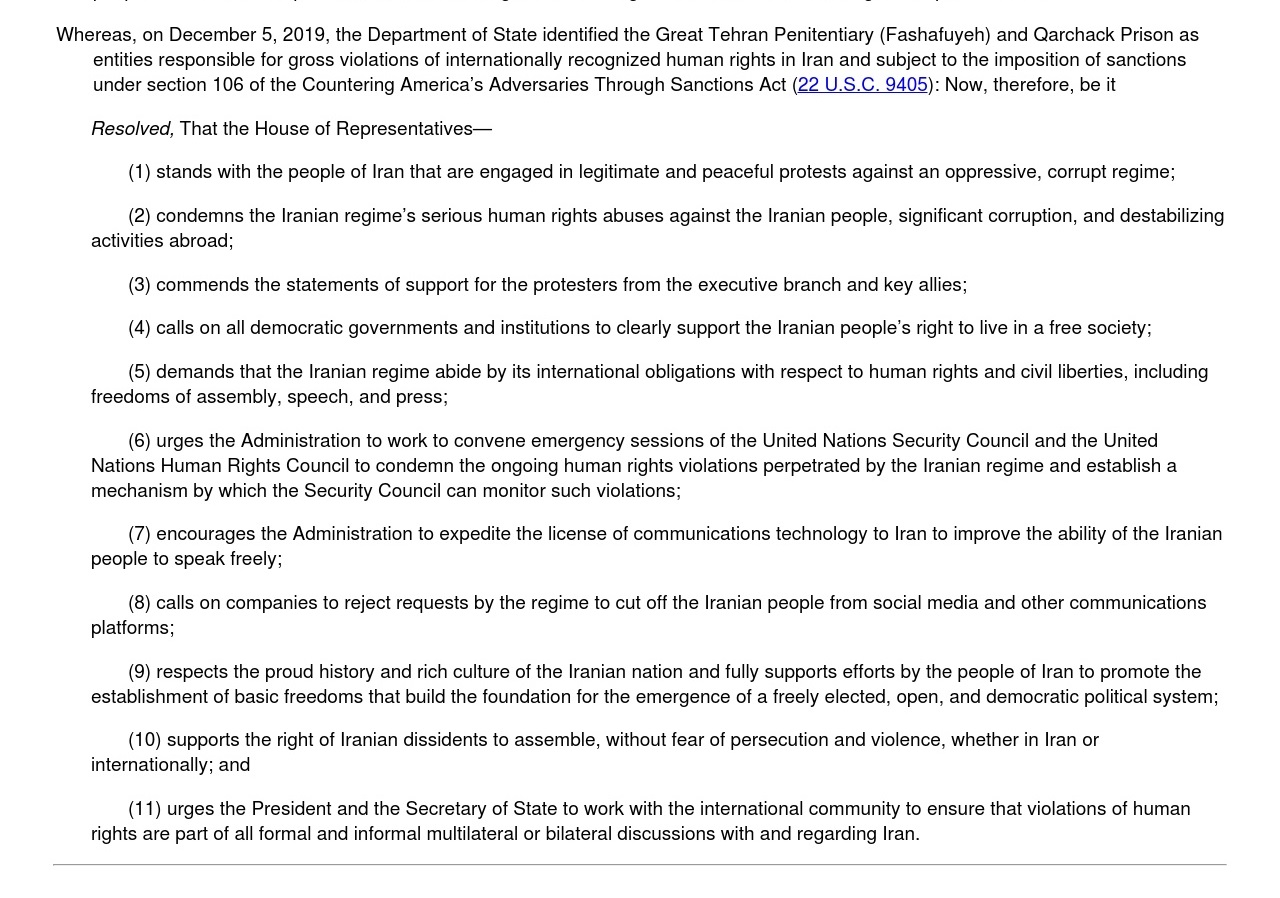 The main opposition group People's Mojahedin Organization of Iran (PMOI), also known as the Mujahedin-e-Khalq (MEK), has announced the names of 400 of more than 1000 protesters killed by Iran’s regime in the Iran protests.