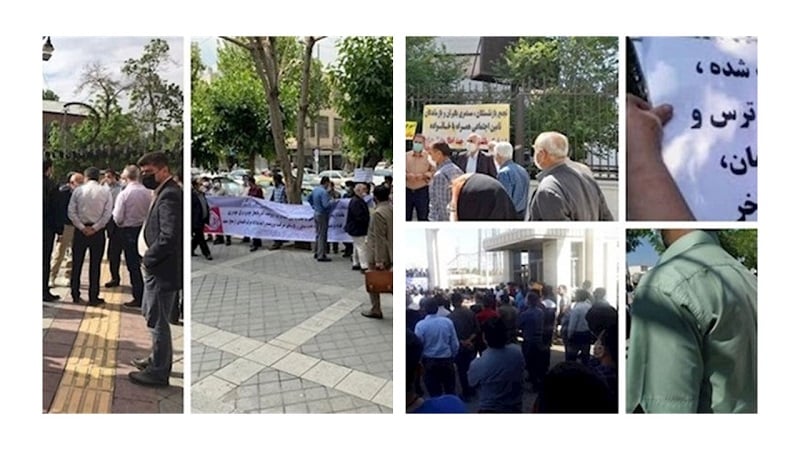 Protests continue to erupt across Iran. All walks of life hold rallies and protest the regime’s wrong policies amid the Covid-19 outbreak. Since protests in Iran are spreading and intensifying, it is necessary to understand their core message.

On Sunday, Iranian retirees and pensioners of the Social Security Organization held their nationwide protests in dozen cities across Iran. They have held numerous protests, sometimes twice a week, demanding their pensions adjusted with the inflation rate and protested the regime’s inaction and corruption.

Simultaneously teachers with “green record” held a rally in front of the regime’s parliament, protesting unemployment and officials’ hollow promises. These teachers have been newly graduated with a “green record,” which means they have acquisition academic rank and a high level of qualification.

In recent days, students held protest rallies in dozen cities to protest taking in-person exams instead of online, given the Coronavirus pandemic. The regime’s repressive measures, such as sending threatening text messages to students and contacting their parents in various cities, failed to prevent students from holding their rallies.

Defying a wave of repressive measure by the Iranian regime, retirees and pensioners of the Social Security Organization took to the streets and held protest rallies across #Iran on Sunday.#IranProtestshttps://t.co/zc7fQWUCtF

Slogans in all the protests mentioned above are not just mere social and economic demands. For example, retirees on Sunday were chanting: “imprisoned worker should be freed,” “We won’t vote anymore, we’ve heard too many lies,” “We suffer from injustice and Covid-19, no one cares about us,” “retirees, stand up again injustice and oppression.”

These slogans and the intensifying protests have terrified the regime. “In social protests, what is important is that a simple civil request has become a matter of security,” wrote the state-run Mostaghel daily on Sunday.

Following the major Iran protests in November 2019, the regime successfully using the Covid-19 pandemic through cover-up and inaction reduced the number of protests.  The regime’s Supreme Leader Ali Khamenei called the deadly virus a “blessing” and “test” and used it to control the restive society.

But now, since people are grappling with extreme poverty, the regime cannot prevent people from protests by continuing its inhumane Covid-19 protests.

Social protests have intensified and spread within the last four months. For example, the retirees initially held their protests in limited towns, but gradually more people joined these rallies, and these protests spread across Iran. Now, other walks of life, from the defrauded investors of the stock market to workers, teachers, and students, have joined the protests.

Khamenei and his regime are witnessing these intensifying protests. But they can neither completely oppress them, as this will intensify protests due to the society’s explosiveness; nor the regime can refuse to oppress these protests, as they would spread rapidly.

The regime’s deadlock in dealing with these protests has caused protests to continue and intensify.

That’s why the state-run media warn of these ongoing protests. The state-run Jahan-e Sanat daily on April 14 reflected the regime’s fear of an uprising of the “Army of starving people” and the consequences of the “Periodic protests” and their “sudden growth.”