Dozens of Protests in Two Days Across Iran 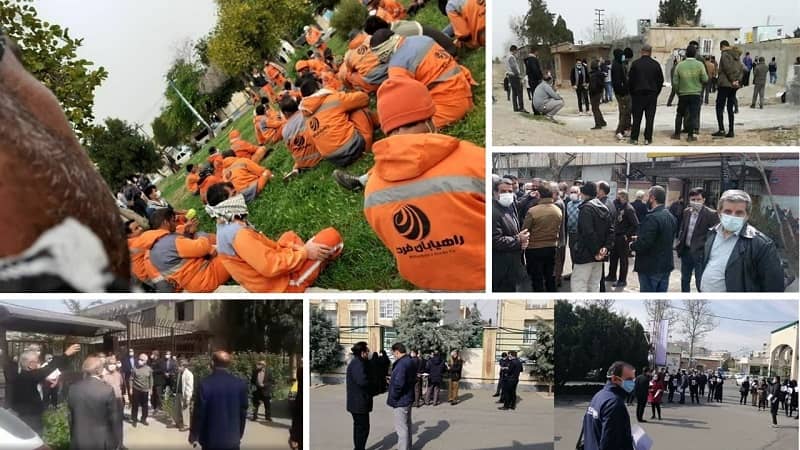 People’s Mojahedin Organization of Iran (PMOI/MEK) has tallied reports through its vast network in Iran, indicating protests by all walks of life due to the dire economic and social conditions.

This week, retirees and pensioners of Iran’s Social Security Organization held their eighth consecutive and nationwide protests on Sunday. They chanted slogans against the regime’s wrong economic policies and its refusal to adjust pensions with the rising inflation rate and the skyrocketing prices.

The rising inflation rate is due to the regime’s banknote printing for compensating its budget deficit.

“Inflation is one of the biggest and most fundamental problems that has plagued Iran’s economy for the past 40 years. The most important structural factor of Inflation in the Iranian economy is the government budget deficit. Without the Coronavirus crisis, this year’s government budget deficit was predicted to be 130,000 billion tomans. Banknote printing is offset, which increases the monetary base and liquidity and ultimately has an inflationary effect,” wrote the state-run Arman daily in this regard on Saturday.

In addition, while the value of Iran’s national currency, the rial, has lost more than 80% of its value in the past few years, the regime has refused to adjust salaries and pensions. Under the current rates and with the rising inflation rate, most pensioners live under the poverty line.

On Monday, oil industry retirees staged a protest in front of the Ahvaz Pension Funds representative office in southwest Iran. The retirees chanted slogans against the Ministry of Oil officials and demanded their rights, such as “We will not relent until we get our rights back.”

Workers of Behbahan Municipality in southwest Iran gathered in front of the city council building on Tuesday morning, protesting their poor living conditions and demanding their wages.

The workers expressed their hardships under the economic pressures on the eve of Nowruz [Persian New Year] and the municipality’s unfulfilled promises to pay their salaries.

Workers of Pars Metal Company gathered on Tuesday to protest the non-fulfillment of the employer’s obligations. The workers’ frequent pursuits and rallies for obtaining their rights have not been fruitful. The only result is the promises of the employer, which the manager has not yet fulfilled. “The employer promised to release 30 checks today so that we could use our banking services, but that did not happen,” said one of the protesting workers.

On Tuesday, employees of Iran’s electricity distribution company staged a rally in front of the regime’s parliament demanding their rights.

These protests by all walks of life indicate the regime has failed in resolving Iran’s economic and social crisis. The regime has used the Covid-19 outbreak to quell society through inaction and cover-up of this crisis. Yet, these protests show the regime’s inhumane Covid-19 policy will no longer work.

“Although the coronavirus crisis delays the conflict, delaying it at the cost of overwhelming issues is a challenge in society. In other words, when society is freed from the clutches of this disease, political, social, and economic faults will begin to move with greater destructive power,” wrote the Jahan-e Sanat daily on Monday.

Previous articleRetirees Protests in Iran, Its Causes, and Effects on Regime
Next articleIran: Coronavirus Death Toll in 522 Cities Exceeds 233,000