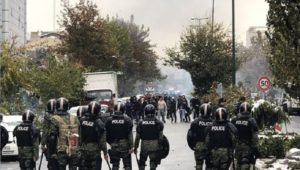 In January 2018, Iran regime’s Supreme Leader Ali Khamenei delivered a speech in which he acknowledged that an organized Resistance movement was largely responsible for a then-ongoing anti-government uprising. Since then, he and other leading regime officials have issued a number of other warnings about the social influence of the People’s Mojahedin Organization of Iran (PMOI-MEK) – something they had spent decades demonizing campaign and fake news denying the very existence of.

Khamenei’s initial remarks were made necessary by the sheer scale and demographic diversity of the movement that began in the final days of 2017 and continued through much of the following month. There was simply no plausible explanation for such a movement that didn’t point to advance planning by a highly-organized and widely-supported activist group like the MEK. And in fact, any other explanation would have been even more damaging to the regime’s façade of stability, insofar as it would have suggested that the nationwide uprising was entirely spontaneous, even effortless.

The impact of that suggestion would have only grown worse in the ensuing three years, since the January 2018 uprising was not the last of its kind. Although it was ultimately fractured by the violent repression coming from entities like the Islamic Revolutionary Guard Corps (IRGC), that movement remained alive in local communities that took part in what NCRI President-elect Maryam Rajavi called a “year full of uprisings.”

The constituent protests in that movement lasted through most of Iran’s previous calendar year, which runs from March to March, and this fact helped to underline the truth of Khamenei’s admission about the MEK’s role. Mrs. Rajavi had personally called for the protests to continue in the wake of the initial uprising, and many activists seemed ready to oblige her, with MEK “Resistance units” even going so far as to post images of their president alongside slogans urging the destruction of the entire existing system.

This message was evident in the 2018 uprising and its offshoots, all of which were defined by slogans including explicit calls for the supreme leader’s ouster as well as rejection of the principle of “veleyat-e faqih,” or absolute clerical rule, upon which his position is based. The same slogans re-emerged on an even larger scale in November 2019, as public outcry over a sudden spike in government-set gasoline prices led to simultaneous protests in roughly 200 cities and towns.

The rekindled uprising was such an existential threat to the mullahs’ regime that it promptly sparked some of the worst political repression Iran has seen in decades. In a matter of only days, mass shootings by security forces and the Revolutionary Guards resulted in approximately 1,500 deaths. The figure was initially reported by the MEK, whose Resistance units were naturally at the forefront of the demonstrations and clashes with authorities. But it was later confirmed by Reuters, in a report that cited multiple anonymous sources from Iran’s Interior Ministry.

The November 2019 death toll is a clear symbol of the danger that the Iranian regime poses to its own people, especially when viewed in context with other crimes against humanity for which that regime has yet to face serious consequences. In July 1988, the Iranian judiciary assembled “death commissions” in prisons throughout the country, for the purpose of interrogating political detainees and determining which of them remained loyal to the MEK or otherwise continued to harbor resentments toward the theocratic dictatorship. After several months, those death commissions sent approximately 30,000 individuals to the gallows, after which many were buried in secret mass graves.

Among those who have acknowledged the mass shootings that the regime carried out almost exactly one year ago, many have expressed sensible concern that it could be a sign of worse things to come. After all, current conditions mimic those at the end of the Iran-Iraq War insofar as the clerical regime is failing in its efforts to project an image of strength and stability either both at home and abroad.

In the first place, the international sanctions has made the regime more isolated than it has been in years while also depriving it of the resources to fuel its participation in escalating conflicts throughout the surrounding region. And in the second place, Khamenei’s 2018 speech and a range of subsequent remarks have bolstered public awareness of the extent to which Tehran failed in stamping out pro-democracy Resistance in the summer of 1988.

While support for the MEK may have been largely driven underground by that year’s massacre, it never truly evaporated. Quite to the contrary, it rebounded and continued its growth across three decades, and now stands as the foundation for a more legitimate, alternative government that stands ready to take over leadership of the country in the wake of a new revolution. The 2018 uprising was unique proof of that legitimacy, as well as being a clear sign that the hoped-for revolution is within reach.

The same can be said of the November 2019 uprising, its brutal repression notwithstanding. As much as that repression symbolizes the persistent threat to ordinary Iranian lives, it also serves to highlight the extent of the regime’s anxiety and desperation, and the extent to which the mullahs’ feel genuinely threatened by recurring popular uprisings led by the MEK.

In fact, the most apt description of those uprisings may not be “recurring” but rather “ongoing.” When looking only at protests on a national scale, the November 2019 appears to be a sequel to January 2018. But there is a very real sense in which the “year full of uprisings” never really ended. And there are countless earlier protests that point to a trend of simmering resentment which constitutes an ever-escalating threat to the mullahs’ hold on power.

This continuity, much like the MEK’s leadership role, has been begrudgingly acknowledged by regime officials and state media outlets in the wake of the two nationwide uprisings. The daily newspaper Resalat, for instance, published a recent article that noted, “Destruction reached one of the highest levels in three decades” during last year’s uprising. But the article also emphasized that this destruction did not emerge from a vacuum, but reflected trends that had been accelerating at least “since the spring of 2019.”

The article described the uprising as taking place at “the height of people’s economic problems,” and it described MEK Resistance units as “organized cadres” that “had long been active in abusing the environment of discontent and possible protests inside Iran.” Similar observations have been offered by numerous other sources whose commentary is supposed to serve the interests of the Iranian regime. But in their efforts to explain the undeniable upsurge in public discontent, these same sources are betraying their awareness of an unbroken opposition movement that could spark another uprising at any moment.

Worsening conditions inside Iran make that outcome all the more likely. These include a coronavirus outbreak that has killed at least 138,300 people. The economic situation continues to deteriorate while the regime’s spending remains focused on foreign entanglements and other priorities that disregard the public welfare. And through it all, violent repression continues as the regime struggles to prevent further unrest. Meanwhile, its own public commentary suggests that the regime is increasingly aware of the impossibility of that task.