Iran: The Agonizing Letter of Starving Workers of Sugarcane Industry 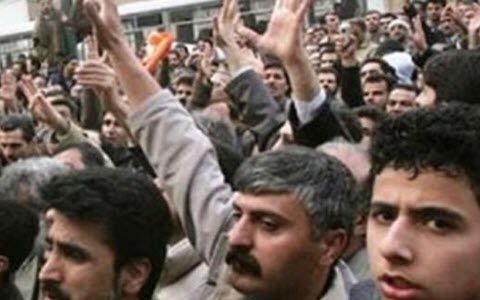 NCRI – A group of workers of Haft Tappeh Sugarcane, who are currently on strike, in a letter to regime’s officials on Wednesday, July 16, 2017, posed their problems.

The letter entitled “The hunger of Haft Tappeh workers will not be alleviated” reads:

“Today, on July 19, 2017, the strike was going on in Haft Tappeh. The workers went on strike to protest against the 3-months unpaid salaries. In addition, 341 retired workers staged strike in March 2017 in protest at the 4% of the employer’s share, which has not been paid to the Social Security Organization yet.

We as the workers announce that we are tired of the employer’s lies. We are tired of feeling ashamed in front of our families. We are tired of indigence. As a father, we feel humiliated and miserable. How are our life, livelihood, and dignity in the hands of an inefficient employer who runs the private sector? They have abandoned us. We are hungry, our kids too. What shall we resort to? Who do we raise our issues? Do our kids understand that the father has not been paid? This is not life. It is not fair. We are also human beings.”

These hardworking workers then addressed the President in their letter, “Mr. Rouhani! How long shall we cry our misery? We are hungry. Why do we have to pay for the inefficiency of some ministries (the Ministries of Industry and Labor) for passing the heinous article 44? Mr. Rouhani! How long shall we organize a strike for our unpaid salaries? We are tired of strike. We also want to work without any preoccupation. We want to produce and create wealth for the country. What should we really do? We are like a child that has to make noise to receive attention and rights. We want nothing but our rights.”

The workers of Haft Tappeh Sugarcane Industry also addressed the Vice-President, Eshagh Jahangir, stating, “Do you want to develop the resilient economy policies in this way? None of the directors even bother to inquire about us. We are also Muslims and have the right to live. Our dignity is lost.”

It is noteworthy that the International Union of Food and Allied Workers (IUF), released a statement on Monday, June 17, 2017, calling on the labor unions and organizations to support the demands of Haft Tepe workers and pensioners for the unpaid salaries and receivables.

This IUF has also supported the two other demands of Haft Tepe workers to recognize the syndicate and retransfer the Sugarcane Industry to the government sector. Following the privatization of this company in 2015, the workers called for its return to a government sector as the company faced economic problems.

The IUF has called for signing and sending online letters to Iran’s Supreme Leader, Ali Khamenei as well as other Iranian officials.

Previous articleU.S. Department of State’s Annual Report: The Iran Regime Remains at the Top of Terrorism-Supporting Countries
Next articleIran Regime’s Senior Mullah: If We Get Along With the U.S., We Will Be Overthrown