Round-up of Iran Protests: State-Run Media Admits Regime Will Not Last a Year 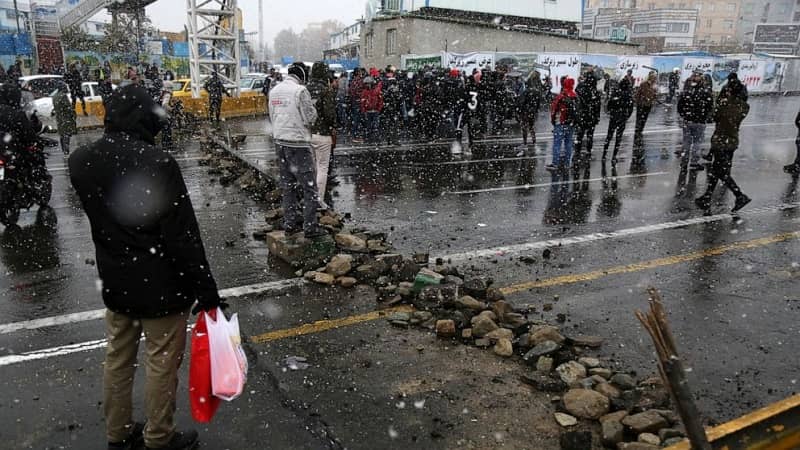 Reports obtained by the People’s Mojahedin Organization of Iran (PMOI/MEK) indicate protests by all walks of life continue across Iran. Retirees and pensioners of Iran’s Social Security Organization held rallies across the country on Wednesday, demanding their delayed pensions and higher wages as the inflation rate continues to rise.

Protesters were chanting: “We have heard too many lies, we will no longer vote,” “Until we obtain our rights, we will be here every day,” “integrity, livelihood are our rights,” “Social Security, shame on you,” and “our country sits on treasure, pensioners are suffering.”

On Sunday, retirees held their nationwide protests for the 9th week. Mrs. Maryam Rajavi, the opposition’s President-elect, had said in this regard: “The protests by the dignified retirees recurring nationwide with the chants to boycott the sham [presidential] election, reflects the cries of protests by all Iranians to obtain their pillaged rights by the mullahs’ usurper and corrupt regime.”

On Monday, plundered shareholders of Iran’s Stock Market Exchange also reflected their hatred toward the regime and its sham presidential elections. While protesting in front of the regime’s parliament, they chanted, “We have heard too many lies; we will no longer vote.”

Tehran Stock Exchange’s (TSE) bubble growth finally burst, causing many people to lose their life savings. They had invested after the regime gave hyped-up promises of a booming stock market.

Reports by the MEK also indicate there have been protests across Iran in recent days by all walks of life. Teachers from various educational institutions in Yazd, Central Iran, rallied in front of the Ministry of Education’s office in the province’s capital to demanding their working privileges. On Tuesday, teachers in Shiraz and Karaj protested the regime’s latest decision to change their pension plan.

In Ahvaz, southwest Iran, a group of workers from the Ahvaz Water and Wastewater Department gathered in front of the governor’s building, protesting authorities’ failure in answering their demands.

On April 6, employees of Khorramshahr’s ABFA Department held a rally, demanding their delayed paychecks. They said their demands and salaries had not been paid for the past three months. These protests show the society’s restiveness and that, unlike what mullahs’ apologists say, the Iranian people’s economic hardships are due to the regime’s corruption and wrong policies.

“Destitution in making their ends meet and fear of their future have filled Iranians with anger. They do not hear [our] words and do not trust anyone. They just curse [the regime] and threat. The consequences are crystal clear. Thus, we will not last a year,” wrote the state-run Arman daily on Wednesday.