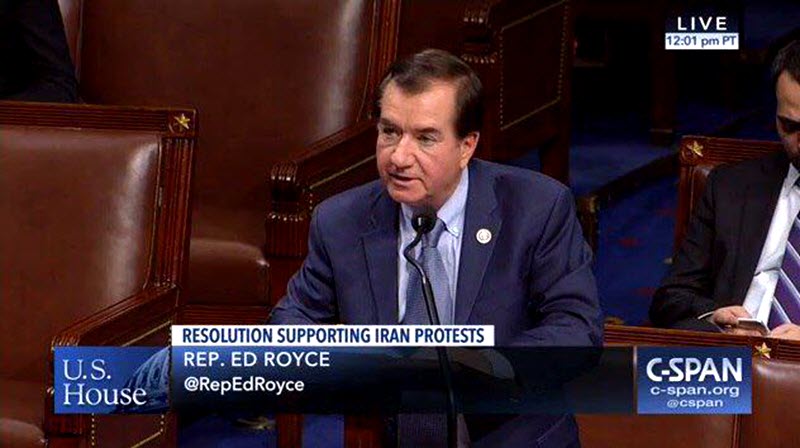 On the House floor prior to the vote, Chairman Royce delivered the following remarks (as prepared for delivery):

“Today we stand with the people of Iran, who are engaged in legitimate protests against an oppressive, corrupt regime.

This is a great people. It was the Persian King, Cyrus the Great, who is credited with drafting the first declaration of human rights – the Cyrus Cylinder.

This was a document meant to protect other cultures, and it secured a special place in the history of civilization. His humanitarian values of freedom for all people, respect for culture and religious diversity, and recognition of the fact that it is better to be loved than be feared – these are remarkable attributes for any ruler.

Indeed, we who live in free societies owe a great debt to the Iranian people. They are the heirs to the Persian culture. Cyrus’ values and ideas for governance inspired the European Enlightenment leaders and our own Founding Fathers, who wove these same ideals into the Constitution of the United States. Thomas Jefferson owned two copies of the “Cyropedia,” a book of histories by the Greek historian Xenophon that told the story of this great king.

It is amazing that Iranians at this moment enjoy far fewer rights than their forefathers did. Cyrus was lauded for the protections he offered religious and ethnic minorities. The regime in Iran has steadily increased its discriminatory practices and repression of the country’s ethnic and religious minority populations – from Azerbaijanis to Baluchs, from the Kurds and the Arabs to the Baha’is and Christians and Zoroastrians. Iranian authorities routinely deny its citizens the most basic human rights through harassment, intimidation, detention and violence.

The young Persians and minorities who have suffered in the prison system in Iran can tell you just how horrible that violence can be. The Iranian regime violates its own international obligations routinely. We must help bring attention to the oppressiveness of the Iranian regime, and the young people who yearn for human rights and the true, celebrated culture of the Persian people.

As this resolution makes clear, the United States House of Representatives fully supports those who have taken to the streets in Iran to exercise the fundamental freedoms of expression and assembly. We join them in the hope that their bravery will build the foundation for the emergence of a freely elected, open and democratic political system in Iran.

It is a moral imperative to support those who risk their lives demanding the freedoms that people in free societies enjoy every day. That’s why this resolution calls on all democratic governments and institutions, worldwide, to join us in clearly supporting the Iranian people’s right to live in a free society.

We all face a clear choice: stand with the protestors – who demand the basic rights and opportunities enjoyed in free societies – or stand with their oppressors – who steal the wealth of a great nation to enrich themselves and to fund violence abroad.

Supporting the people of Iran is also a strategic imperative. These brave men and women are standing up against the Revolutionary Guards’ violent intervention in Syria and Lebanon. We must join them in demanding an end to the single greatest source of instability in the Middle East.

In standing with the Iranian people, we must explain that they are not the target of our sanctions. U.S. sanctions target the oppressive, destabilizing regime, not the people of Iran.

That’s why – as this resolution makes clear – Congress has provided authority to license communications technology that improves the ability of the Iranian people to speak freely. Today, we call on the agencies involved to expedite those licenses. U.S. international broadcasting must also turn up the volume of its efforts in Iran, conveying a message of hope and support that includes this debate, today, in the American people’s House. Iranians must know that they are not alone in their struggle for freedom.

We also call on companies to reject requests by the regime to cut off the Iranian people from social media. These technologies are at their best when they are used to empower people and undermine the efforts of oppressive regimes.

There is more that we can do. I welcome Chairman McCaul and Congressman Deutch’s introduction of bipartisan legislation that will give the administration greater leverage to target those responsible for ordering and carrying out human rights abuses in Iran. This includes the regime’s practice of holding Americans and other foreigners hostage. Many of the regime’s hostages are people of Iranian descent who came to visit family members and loved ones.

I am also working to introduce legislation that has the same goal as those who have bravely taken to the streets in Iran – to push the corrupt Revolutionary Guards out of the Iranian economy. In doing so, it seeks to deny the Guards the funds they use to hold power over the Iranian people while destabilizing Syria and Lebanon.

Mr. Speaker, Congress and the administration have a great opportunity. We must work together on an approach to Iran that empowers the Iranian people and targets the corrupt regime, which oppresses a great people. We cannot be quiet. With the passage of this resolution, we state that America stands with the Iranian people.”

Previous article
Two Detained Protesters Martyred in Prison by Interrogators and Torturers
Next article
After 13 Days of Silence, Khamenei Acknowledged Continuation of Uprising, and PMOI as the Organizer of It