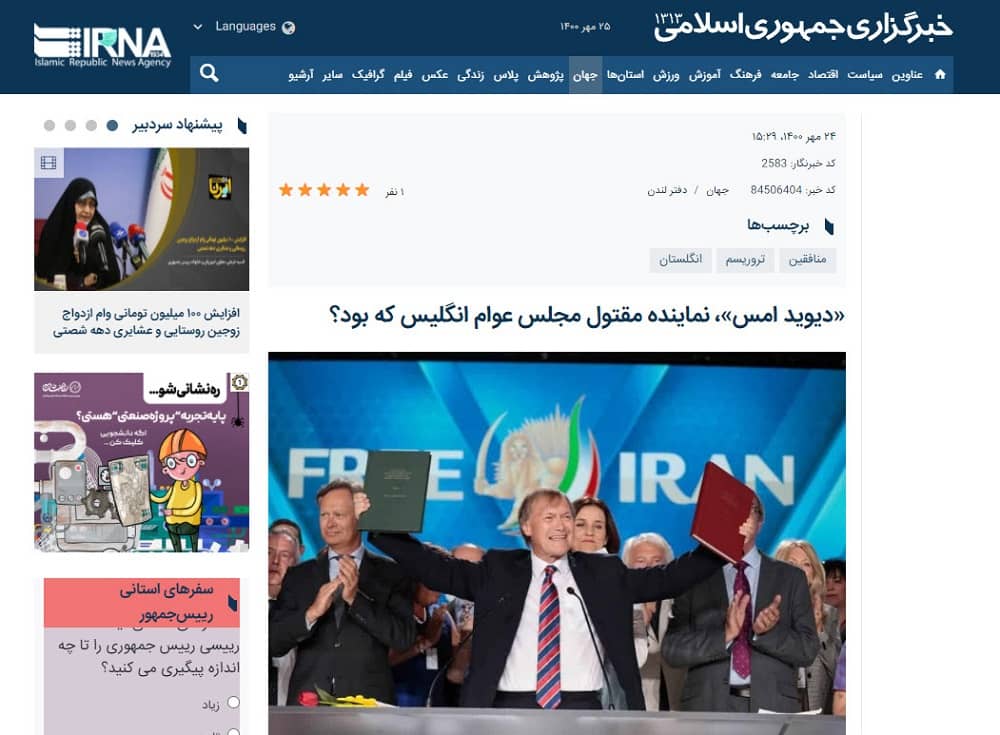 Following the horrific assassination of the British MP Sir David Amess, the Iranian regime’s state-run media lashed him for his support of the Iranian Resistance and practically celebrated his assassination. Sir Amess was a staunch advocate of human rights and mainly supported the Iranian opposition, the People’s Mojahedin Organization of Iran (PMOI/MEK), in its quest for democracy in Iran for near four decades.

“David Amess, a British MP, was stabbed to death on Friday. Besides his right-leaning positions and supporting the Brexit, he had underlined he was honored to support the MEK terrorist grouplet,” wrote the official IRNA News Agency on Saturday.

IRNA then adds that Sir Amess “Never apologized for his positions” toward the regime “and continued supporting the MEK until the end.”

These words are very much like those in Ruhollah Khomeini’s fatwa in 1988, which underlined that the MEK supporters should be executed. This fatwa resulted in the 1988 massacre of over 30,000 political prisons.

Iran’s state-run media were filled with hatred toward Sir Amess. “He [Sir Amess] was the co-chair of the so-called ‘Iran Freedom Committee’ which supported the MEK. Under the pretext of supporting democracy in Iran, Amess had supported the MEK’s criminal activities. He also claimed the Iranian people boycotted the presidential elections in support of the MEK.”

A British MP who has longstanding links& rewarded by MEK/Terrorist Org.repeated to support democracy in Iran. He intentionally not seen that last Friday,in Birmingham this&same so-called pro democracy Orgs.have violently assaulted&injured a woman who just wanted to cast her vote. pic.twitter.com/iW6jJqYWkS

“Amess had described himself as the champion of defending democracy in Iran. He had not missed an opportunity to support the MEK and cover up their crimes. He met opposition leader Maryam Rajavi many times. He had opposed the MEK’s terrorist designation in the U.K. in 2007, and in many parliamentary sessions, called for adopting harsh policies toward the Islamic Republic. About a month ago, he called his support of the MEK a bright point in his career. He had also traveled to the U.S. to participate in the MEK’s event and announce that regime change in Iran is at reach,” IRNA adds.

Sir Amess was a true advocate of democracy and freedom and never abandoned supporting the Iranian people and their resistance in their struggle for a free Iran.

As Mrs. Maryam Rajavi, the Iranian opposition’s president, underlined, “Sir David Amess was an admirable symbol of advocating freedom, democracy, and among martyrs to the cause of freedom. We are proud that he rushed to aid our people’s fight against religious fascism in the darkest period of Iran’s history.”

Sir #DavidAmess was an admirable symbol of advocating freedom, democracy, and among martyrs to the cause of freedom.
We are proud that he rushed to aid our people’s fight against religious fascism in the darkest period of #Iran's history.https://t.co/GIlEzCxJV2 pic.twitter.com/AdBNcu6xnL