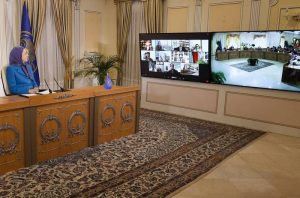 On Wednesday, March 31, 2021, the National Council of Resistance of Iran held its interim session in Paris with the NCRI’s President-elect, Mrs. Maryam Rajavi. The session was held with virtual participation of members of NCRI and observers in 12 countries, including Germany, the U.S., Austria, the U.K., Italy, Belgium, France, Sweden, Luxembourg, Norway, the Netherlands, and Ashraf-3 in Albania.
At the beginning of the meeting, Mrs. Maryam Rajavi, President-elect of the NCRI, after renewing the Nowruz congratulations and commemorating the deceased members of the council, described the new Persian year 1400, “to be decisive, to the extent that one can predict, several significant developments are on the horizon, each of which could have extensive political and social impacts. They include the clerical regime’s sham president election, the fate of the JCPOA nuclear agreement, and the potential of uprisings bursting out from underneath the ashes of the Coronavirus.”
Mrs. Rajavi also said, “40 years after June 20, 1981, and a full-fledged resistance against the mullahs’ religious dictatorship with 120,000 martyrs, the massacre of political prisoners, and the uprisings in December 2017 and November 2019, now the vote of every Iranian is the regime’s overthrow. Again, for the nth time, we reiterate the motto we chanted just the day after June 20, 1981. We say: Yes to democratic change, democratic revolution, and a democratic republic!”

Mrs. Rajavi also said, “The NCRI is proud to have insisted on overthrowing the entirety of the clerical regime since its foundation four decades ago. The NCRI has constantly exposed and dashed the illusions about the regime’s potential to reform. It has always neutralized the false claims about the existence of so-called moderates and reformists within religious fascism. In its proud existence, the NCRI personifies the Iranian people’s decisive NO to the Shah and the mullahs’ dictatorships.”
She said future Iran would be “a pluralist republic based on free elections, separation of religion and state, gender equality, abolishing the death penalty, and eliminating all forms of discrimination against followers of various faiths, and autonomy for all ethnic groups.”
Concerning the regime’s upcoming presidential election charade, Mrs. Rajavi described the situation as an effort by the supreme leader to install “one of his own cronies” as president so as to promote a larger goal of consolidating power for his own faction. The NCRI’s leadership has concluded that the clerical regime can no longer afford factional power-sharing in the wake of recent nationwide unrest, successful electoral boycotts, and popular endorsements for a platform of regime change. These trends have been apparent at least since December 2017, when a protest over economic conditions in the city of Mashhad sparked a series of protests with much broader messaging in more than 100 cities and towns.

The regime is fully aware that it is being threatened by very radical uprisings. Yet, it cannot offer any political or economic solutions to contain them. Whatever solution it undertakes, the outcome will undermine its own foundations. #IranProtests #آری_به_جمهوری_دمکراتیک pic.twitter.com/Zd3MQfx2uB

While that uprising was at its peak in January 2018, Khamenei issued a speech that contradicted many years of government propaganda by acknowledging that the protests had been organized and the accompanying slogans promoted by the MEK. Since attempting to stamp out the MEK through a massacre of 30,000 political prisoners in the summer of 1988, regime authorities had been trying to portray it as organizationally weak and lacking in popular support. But since the January 2018 uprising, many officials have been warning of the potential for more MEK-led challenges to the mullahs’ hold on power.
Those warnings were proven to be well-founded in November 2019, when Iran was spontaneously rocked by another nationwide uprising, this one encompassing nearly 200 localities. Security forces and the Islamic Revolutionary Guard Corps responded to the renewed unrest by opening fire on crowds of protesters, killing approximately 1,500. Yet less than two months later, after it was revealed that authorities had attempted to cover up a missile strike that brought down a commercial airliner near Tehran, hundreds of thousands of Iranians were out in the streets again for protests, the messaging of which often took direct aim at the IRGC.

Wednesday’s meeting reiterated the NCRI’s conclusion that that series of events led regime authorities to a certain consensus regarding the loss of their social base in Iranian society, the near certainty of even more unrest in the future, and the prominent role the NCRI and MEK have played and will continue to play in such unrest.
“If we want to look at the regime’s situation, we can explain it in three areas. All the gangs within the regime that are fighting each other agree on three issues. The first is that social capital is lost and there is no trust, and people do not trust them. The second issue that all of them have consensus is that the regime is extremely vulnerable. If an uprising similar to the January 2020 uprising occurs again, it can no longer be suppressed; that is, even with the brutal repression that suppressed the January 2020 uprising, they cannot restrain the next uprising. The third issue on which there is a consensus is the Iranian resistance activities, to which Khamenei himself and other regime officials say that these activities have become unbearable for them.” Mr. Jalal Ganjaei, the chairman of the Religions committee, said about the situation of the regime. 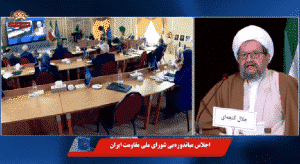 “I think the problem of Iranian society with the uprising of the MEK has been resolved. It means that going back is impossible. Not only is it impossible to go back, but it is also impossible to go back halfway.” Dr. Manouchehr Hezarkhani, chairman of the Arts and Culture Committee, said. 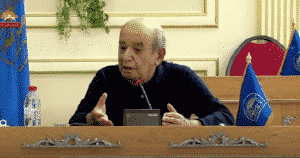 The meeting’s participants also agreed that consolidation of power ahead of the presidential election is only one of the means by which regime authorities hope to forestall severe challenges to their hold on power, but even this would be fruitless.
“Khamenei’s candidate for the election is Ibrahim Raisi, and in this way, he wants to purge the other faction inside the regime, but this candidate will create a lot of problems for him. The paradox that Khamenei is facing is that when he eliminates the other factions’ candidates through the Guardian Council, the election show will no longer even be in the form of a show, which will cost Khamenei heavily. Even the regime gangs would not participate in the election show.” said Mehdi Abrishamchi, chairman of the Peace Committee, in regards to the regime’s presidential election. 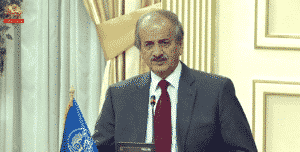 “I think by increasing repression, Khamenei can eliminate the other faction. But just as Ahmadinejad made it difficult for Khamenei when he sat in his presidency as an appointee, if Khamenei brings anyone else, even a robot as a President, it will only exacerbate the regime’s problems again and the revolutionary situation will not change,” said Mehdi Samea, the chairman of the Industries Committee.

The NCRI leadership proceeded to highlight several concrete effects of the regime’s priorities. Among these was mismanagement of the coronavirus pandemic and abdication of the government’s basic responsibility with regard to the country’s economic future. Participants in the meeting explicitly condemned a recently-announced 25-year economic agreement between Iran and China, which they described as giving away large portions of the country’s industries and assets to a foreign power. The anticipated loss of autonomy was presumably justified in Tehran by the accompanying short-term infusion of cash, which can now be utilized in the further repression of dissent and consolidation of power.
Despite all this, the NCRI’s meeting was overwhelmingly optimistic about the ultimate failure of the regime’s efforts to tighten its control over the country. In light of the record-low voter turnout for parliamentary elections and a recent upsurge in new, large-scale protests, Resistance activists anticipate “crushing consequences” for Khamenei if he moves forward with installing a president whom he can directly control or even worse if he is unable to do so.
Mrs. Rajavi concluded her remarks by articulating the “Future prospects for Iran.” She said, “The Iranian people and Resistance, the Resistance Units and the Army of Freedom, will have the final word. The November 2019 uprising forged a sweeping and shining model that foretells how forces of rebellion and uprising will overthrow the regime. In reality, this force of rebellion and uprising is lurking in the heart of Iranian society. This force has grown from the seeds of sacrifice sewn in Iranian society by 120,000 martyrs who laid down their lives for the cause of freedom, as well as from the long, steadfast struggle of the MEK and the NCRI.”