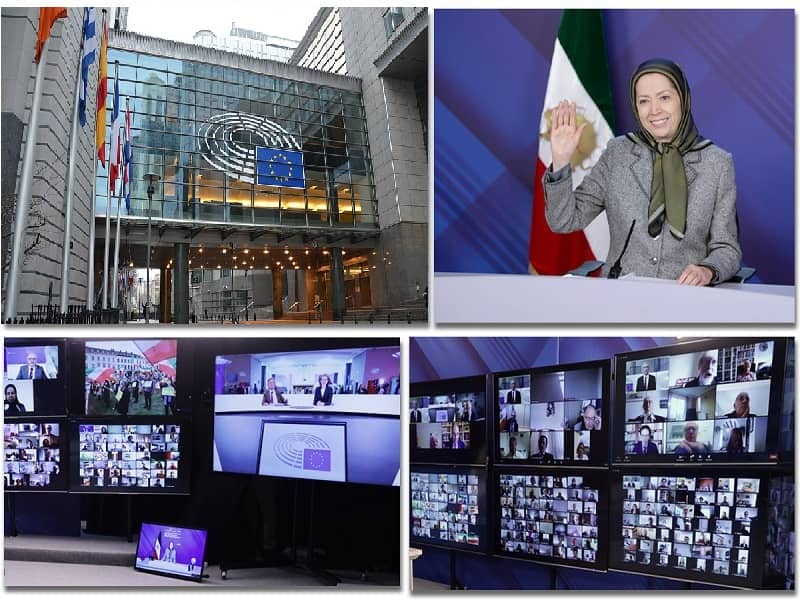 On Wednesday, a number of current and former members of the European Parliament took part in an online conference. The politically diverse roster of participants represents a solid base of international support that has emerged for the Iranian opposition and its struggle for freedom in Iran outside of the country. That support has apparently been growing steadily since at least 2004, when the NCRI began holding international gatherings of Iranian expatriates and political dignitaries near its headquarters in France.

By 2018, this annual rally for “Iran Freedom” had come to represent such a threat to the Iranian regime that leading officials signed off on plans for a terrorist attack on that year’s event. These plans were channeled through the Iranian embassy in Vienna, where a diplomat-terrorist named Assadollah Assadi led the plot and coordinated with three Iranian sleeper agents in Europe. Assadi had personally handed over explosive material and a detonator to two of those operatives, with instructions to smuggle it from Belgium into France, and to the rally’s venue in the Paris suburb of Villepinte.

Fortunately, those would-be bombers were arrested before crossing the border, and Assadi himself was apprehended in Germany before reclaiming diplomatic immunity at his diplomatic station. His trial is now scheduled to begin on November 27 in Belgium, and the potential implications of that trial were a major focus of speeches that were delivered as part of Wednesday’s online conference. While some participants highlighted the terror plot as a reminder of the escalating conflict between the Iranian regime and the Iranian Resistance, others emphasized the perceived failures of the European Union’s policy that allowed Tehran to feel comfortable taking such action on European soil.

This latter point was underscored by Mrs. Maryam Rajavi, the NCRI’s president-elect. “The regime was confident that it would not pay any price for committing such major terrorist crime in the heart of Europe,” she said in her keynote address to Wednesday’s conference. This, she added, was the consequence of a longstanding series of Western governments’ appeasement policy.

This perspective was endorsed by many other contributors to the conference, some of whom also called attention to their own efforts at urging more assertive action by their own governments. Those same participants generally expressed optimism about the current situation and its potential to cause a significant international turnaround about the Iranian regime.

Specifically, these MEPs cited the Assadi trial as potentially exposing the close overlap between the regime’s terrorist proclivities and its official state institutions. Assadi stands to be the first diplomat held accountable for the planning of a terrorist act, although he is by no means the first to be reliably implicated.

As Mrs. Rajavi said in her speech, “European intelligence services have repeatedly reported that the regime’s embassies are centers of espionage and operations against dissidents.” And this fact was reiterated in the wake of Assadi’s arrest, when a spokesperson for Belgian authorities acknowledged in a press conference that nearly all Iranian consular officials play such clandestine roles.

For some observers, such remarks surely raise questions about why European governments have not already adopted assertive policies for confronting the threat of Iranian terrorism. But Wednesday’s conference provided answers to these questions, insofar as it attributed flawed Western policies to a mistaken belief in the stability of Iran’s existing regime and the absence of meaningful challenges to its hold on power.

Dutch MEP Derk Jan Eppink, for instance, described the EU as “falling [for] Iranian state propaganda” that misrepresents the relationships between the Iranian regime, the Western powers, and the Iranian people. Over four decades, much of that propaganda has focused on demonization of the NCRI and its main constituent group, the People’s Mojahedin Organization of Iran, as having little popular support inside Iran. However, this bogus claim was definitively undermined in early 2018 when no less an authority than Iran’s “supreme leader” credited the MEK with leading a nationwide anti-regime uprising.

That uprising, together with growing international support for the MEK and an assertive shift in US policy toward Iran, set the stage for the regime’s attempt to crack down on the Resistance movement far beyond its own borders. But after the failure of the 2018 terror plot, Iran concluded a period that Maryam Rajavi described as a “year full of uprisings,” then went on to experience another, even larger nationwide protest in November 2019.

Through it all, Iranian government officials continued to warn one another about the growing influence of the MEK and the NCRI. Thus, many of the western politicians have expressed their support in favor of recognizing the potential for the Resistance to oversee regime change and the establishment of democratic governance in its homeland.

About this possibility, former MEP Tunne Kelam said in Wednesday’s conference, “Change in Iran is the sovereign right of Iranians. But it can be advanced by a change of EU policy,” specifically by a shift away from policies that have “just paid lip-service” to crimes such as the 2018 terror plot and the various domestic crackdowns with which Tehran has sought to stamp out ongoing Resistance activism.

Mrs. Rajavi’s speech was still more explicit about the changes in EU policy that the NCRI and its supporters believe could hasten the collapse of the theocratic regime. She called for European commitment to safeguarding human rights in Iran, starving the Iranian regime of resources, and formally recognizing the legitimacy of the Resistance movement’s demands for freedom and democracy.

On behalf of the Iranian people’s Resistance, I propose an #Iran policy with three elements. #NoImpunity4Mullahshttps://t.co/NhFzlKGcTOhttps://t.co/K0kwiUS2IG

Alejo Vidal-Quadras Former Vice President of EP raised the same issue on his speech and said: “Many members today spoke about their appalling situation of human rights in Iran. I know for sure that there are many more members in the European Parliament, which are very concerned about it. They could not join us today, but I know they think exactly as we do. It was a similar situation when I was Vice President of the European Parliament, many of us asked to the high representatives of those days, Lady Ashton and Mogherini. They asked them not to ignore the brutalities of the regime and act firmly. Unfortunately, they did not listen to us and their reaction was the same as it is today, doing absolutely nothing.”

Mr. Vidal questioned the inaction of the EU and the UN regarding the situation in Iran and said: “Today, the European Union and United Nations are following the situation in Belarus. They protest and they call for punitive action. This is very good, and we wish them success. But the question is, why in Belarus they act, and the atrocities of the Iranian regime do not deserve the same attention, why? Because in Belarus, the protesters are suffocated or beaten? Yes, but they are not executed, not taken to torture, or being tortured to death. Why Belarus deserves the attention of Mr. Borrell and Iran does not? Can somebody explain to us this mystery? The United Nations sent a fact-finding mission to Venezuela. Very good. Congratulations. Why did they not send a fact-finding mission to Iran when things are so bad or even worse, much worse than in Venezuela? How can the European Union and the United Nations remain silent in face of all these savage killings in Iran just to save the nuclear deal? Should the nuclear deal be paid with a price, which is the life of so many innocent Iranians.”

“Nothing serious is done to stop the brutal killing of all these innocent demonstrators. They are entitled to protest according to the United Nations Charter and according to the Universal Declaration of Human Rights. Where are our European principles? Where? Why they are silent when all these terrible things are happening in Iran? How can the European Union leaders look to the eyes of the Iranian people who are suffering under the most brutal tyranny of many years and just do nothing? How can they look to the eyes of the two little children, the two little kids of Mostafa Salehi? Can they look up to the eyes, to these two children and tell them they did nothing while his father was being murdered by this regime?”

In her remarks Mrs. Rajavi urged the European Parliament to adopt binding legislation that would expel Iranian agents from European territory, shut down embassies that may serve as staging grounds for terrorist acts, designate regime proxies as terrorist groups, and investigate the current condition of Iranian prisons as well as the details of prior crackdowns on dissent, in order to send the message that Tehran no longer enjoys the sort of impunity that motivated its effort to bomb the Resistance in France just two years ago.