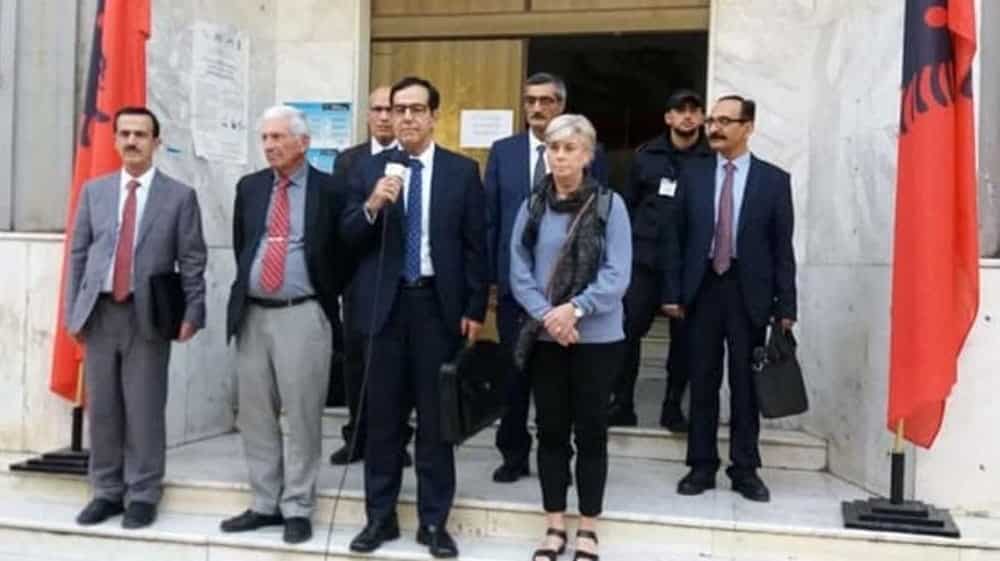 The trial of former Iranian prison official Hamid Noury continued in Durres, Albania this week following its temporary relocation from Stockholm, as requested by Swedish prosecutors. Noury was arrested in 2019 upon traveling to Sweden and was later indicted on charges of war crimes and murder stemming from his participation in the massacre of 30,000 political prisoners during the summer of 1988. His trial began in August and is expected to conclude in April after the court has heard from dozens of eyewitnesses to the killings and the broader conduct of Noury and his colleagues.

The temporary change of venue was requested in order to hear in-person testimony from seven key witnesses who were serving as political prisoners in Iran during the massacre, and who now resides at Ashraf 3, a compound established in Albania by the People’s Mojahedin Organization of Iran (PMOI/MEK) following thousands of members’ relocation from Iraq in 2016. Coincident with the hearings that have been held in Durres, Ashraf 3 was also the site of gatherings meant to commemorate the victims.

Additionally, hundreds of Iranians gathered in Stockholm, just as they had been during each of the 40 sessions that have been held there so far.

This in turn underscores the sheer scale of the massacre, which legal scholars have recognized it as genocide. Arguments to that effect appeared in conferences hosted by the NCRI following the “election” of Ebrahim Raisi as president of the Iranian regime. Discussions about the implications of his leadership frequently overlapped with discussions of his role in the 1988 massacre. That topic gained even greater prevalence after the start of the Noury trial, insofar as it provided a test case for accountability which might be applied to Raisi as well.

At the time of the massacre, Raisi was one of four officials who sat on the Tehran “death commission” that was tasked with interrogating political prisoners over their political views and affiliations, then passing capital sentences for all those who remained steadfast in their support of the MEK. As the testimony in Stockholm and Durres has emphasized, the interrogations generally lasted only a few minutes and often consisted of only one question concerning support for or disavowal of the MEK.

The ensuing political purge certainly qualified as a crime against humanity and genocide. Legal scholars such as Geoffrey Robertson QC and Eric David have argued that the fatwa underlying the death commission’s efforts had a broader aim. With it, Supreme Leader Khomeini declared all members of the MEK guilty of “enmity against God” and instructed officials to “annihilate the enemies of Islam.” These and other religious statements imply an effort to eliminate entire faith communities so as to prevent challenges to the mullahs’ fundamentalist theocracy.

Noury’s arrest was justified as the implementation of “universal jurisdiction,” which allows for serious violations of international law to be prosecuted in any venue, even if the crimes in question took place somewhere else entirely.

Report No. 3 By Judiciary Committee Of The National Council Of Resistance Of Iran (NCRI)
Publication of indictment and documents in the Case of Hamid Noury, Iranian Regime Henchman, by Swedish Prosecutor Authority#Iran #ProsecuteRaisiNOW #1988Massacrehttps://t.co/G0HysMHhv6

This justification does not appear to have faced any serious challenge over the past two years, and it stands to reason that future challenges would be even less substantial in light of an expanded legal understanding of the 1988 massacre. Scholars and advocates for the victims have described that incident as perhaps the worst crime against humanity to take place during the latter half of the 20th century, while groups like Amnesty International have declared that the regime’s ongoing concealment of evidence and intimidation of victims’ families signify that that crime is still ongoing.

This perception was reinforced in the wake of Raisi’s ascension to the presidency when he openly defended his role in the massacre and reiterated his former praise for Khomeini’s blanket death sentence. Such commentary clearly undermines any potential legal defense which relies on claims of individual ignorance about the overall massacre.

This phenomenon was apparent in the Noury trial, too, with one witness named Akbar Samedi testifying that he encountered Noury a few years after surviving the massacre and listened as he lamented that Samedi “slipped through their fingers” when he should have been hanged for his support of the MEK.

At least one speaker at the Ashraf 3 gathering recalled a similarly callous attitude from the defendant. Dr. Atefeh Aftiani said that her sister Maryam communicated with the MEK in the aftermath of the massacre and then disappeared in 1992. “On August 30, 1993,” she said, “Hamid Noury told my mother: ‘Your daughter wanted to join the MEK. We killed her.’”

Both in Durres and in Ashraf 3, witnesses described Noury calling out the names of those who were scheduled to appear before the death commission and of those who had been sentenced to execution. The testimony allowed little room for doubt about Noury’s awareness of the massacre’s scale or its lack of legal basis. Some former political prisoners even emphasized that the stage had been set for the massacre months if not years ahead of time and that figures like Noury and Raisi helped to make it so.

In one speech at Ashraf 3, Mohammad Sadegh Sadeghi said that as early as 1981, there were single days during which he heard more than 200 executions being carried out. In another, Hassan Zarif estimated that 90 to 95 percent of the population of Evin Prison was killed during the 1988 massacre. “Of the 14 wards in Evin, which had thousands of prisoners, less than 90 prisoners survived,” he said.

Such recollections are typical of witnesses to the massacre, and they further highlight the perceived need for an international commission of inquiry into the scale and details of the massacre. The contents of the Noury trial may set the stage for just such a commission.