The Rise of a Mass Murderer to Iran Presidency a Sign of Weakness, Desperation, Not Strength 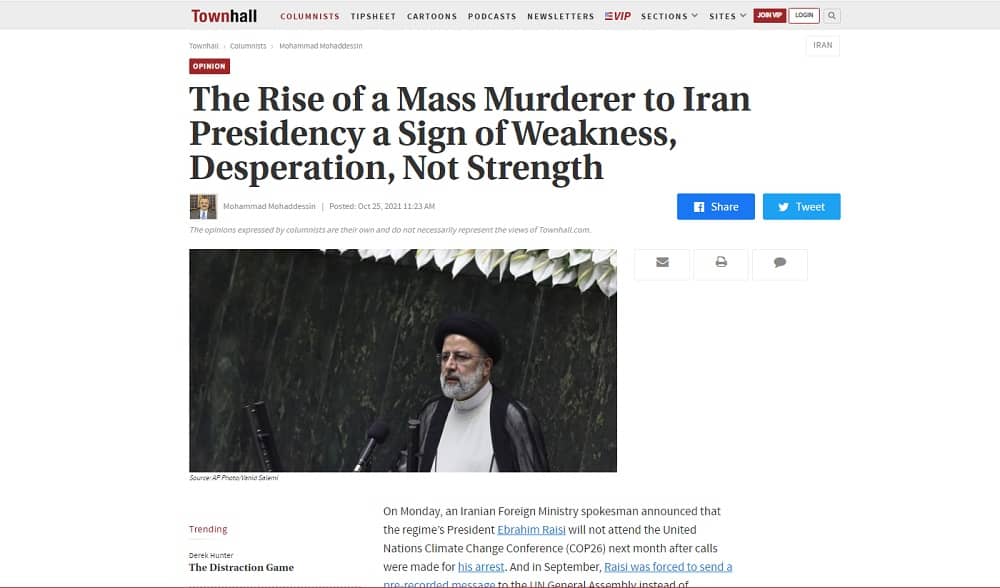 On August 5, the Iranian regime’s new president Ebrahim Raisi was inaugurated. Raisi’s ascendence to the presidency once again showed that impunity over human rights violations reigns supreme in Iran since Raisi is a mass murderer. He was one of the leading figures who led the 1988 massacre of 30,000 political prisoners. The regime’s Supreme Leader, Ali Khamenei, chose Raisi to consolidate power in his regime of mass murderers and thieves. But was this choice out of the regime’s strength or a sign of desperation and weakness?

In an article published on the Townhall on October 25, Mr. Mohammad Mohadessin, the chairman of the National Council of Resistance of Iran (NCRI) Foreign Affairs Committee, delved into this matter and shed light on the regime’s desperation in choosing Raisi as president.

Below is the full text of this article.

On Monday, an Iranian Foreign Ministry spokesman announced that the regime’s President Ebrahim Raisi will not attend the United Nations Climate Change Conference (COP26) next month after calls were made for his arrest. And in September, Raisi was forced to send a pre-recorded message to the UN General Assembly instead of attending in person. This is despite the fact that the regime is desperately seeking some form of an international spotlight to escape painful isolation.

Both of these cases are a function of the unprecedented international denunciation of Raisi in particular as a mass murderer involved in the massacre of over 30,000 political prisoners in 1988.

Raisi has long been condemned as a serial human rights abuser. In November 2019, the United States designated Raisi, then head of the regime’s repressive Judiciary, for egregious rights violations. The US Treasury said in a statement that “as deputy prosecutor general of Tehran, Raisi participated in a so-called “death commission” that ordered the extrajudicial executions of thousands of political prisoners in 1988.”

Amnesty International declared that Raisi should be prosecuted for crimes against humanity, a call echoed by the UN investigator on human rights in Iran, as well as seven top UN rights experts.

The regime is desperate for international attention, but Raisi continues to scrap plans to visit foreign countries, primarily because of extensive campaigns by the organized Iranian opposition requesting his arrest and prosecution if and when he dares to set foot abroad.

In such circumstances, why did the regime’s Supreme Leader Ali Khamenei do his utmost to install Raisi as the regime’s president? Every reasonable observer would conclude that he must have anticipated such backlash against a mass-murdering president both at home and abroad. So, why?

Of course, Khamenei knew full well that Raisi is a despised figure. But he had little choice. Bogged down by an economy in tatters and a disastrously botched response to the coronavirus pandemic, which has killed approximately half a million people in Iran, the regime is terrified of uprisings against its illegitimate and corrupt rule. So, Khamenei has decided to close ranks and prepare to confront mass uprisings.

There are three primary drivers for Khamenei’s desperate move to install Raisi and his cabinet of murderers, terrorists, and corrupt thieves.

First, the socio-economic situation is at its worst in the past decades. Serious crises encircle the theocracy, for which it has no solutions. The overwhelming majority of the Iranian people are struggling to make ends meet, last week the central bank announced inflation is 58 percent which is the highest its been since 1943 during the Second World War, and in many areas access to even the basic necessities like water and electricity is severely hampered. Poverty is at an all-time high, giving rise to trends ranging from average homelessness to people dwelling in empty graves.

Second, in the midst of catastrophic socio-economic trends, protests and upheavals have become more frequent and ubiquitous than ever before. The four main uprisings since January 2018 were as ferocious and potent as they were organized. Thousands of state-affiliated institutions of corruption were attacked and burned by protesters in November 2019. The dominant slogans, repeated over and over again, have called for the overthrow of the regime in its entirety as the only solution to a myriad of deepening popular grievances.

Outrage over rapidly declining living standards invariably morphs into the predominant political demand: Down with the Dictatorship. Today’s Iran is rife with the burning popular desire for change, democratic regime change.

And, third, the biggest indicator of that singular yearning is the rapid rise of Resistance Units, young activists defying the regime’s veil of suppression. These Resistance Units are organized by the main opposition Mujahedin-e Khalq (MEK), which has long been a target of the regime’s most venomous demonization campaigns. But the young generation is wise to the regime’s propaganda. They are embracing the MEK’s message and strategy to overthrow the regime like never before.

Over the past two years, Khamenei has left the Iranian people essentially defenseless against the coronavirus. Through the pandemic, he essentially created a killing field, systematically throwing innocent people into the dragon’s mouth. He speculated that the resulting social lethargy and disillusionment would be so heavy that it would prevent more uprisings.

But the spread of the Resistance Units has frustrated Khamenei’s killing field strategy. More people are inspired by acts of defiance, rekindling the hope that regime change is more accessible than ever before.

To be sure, Raisi’s installment as president was meant to intimidate the population. But the Iran of 2021 is vastly different than that of 1988. As developments of the past few weeks have proven, Raisi is a double-edged sword for the regime.

With more uprisings looming on the horizon, and Resistance Units coalescing the Iranian people’s resources around the popular rallying cry for the regime’s overthrow, the crumbling theocracy is growing more desperate, scared, and miserable than ever before. Which is why the prospect of a secular, democratic, and non-nuclear Iran is shining brighter than ever before.

The world should cheer that promising prospect as loudly as it should jeer the presence of a mass murderer like Raisi on the world stage.