Ever since Iran’s 1979 revolution, the regime’s medieval nature prevents the mullahs from resolving people’s issues. The regime thus resorts to oppression to preserve its rule. Oppression of women is at the core of the regime’s reactionary policies.

When Ruhollah Khomeini hijacked Iran’s anti-monarchic revolution, the misogynous slogan of “headscarf or oppression” became one of the principal slogans of state organized thugs directed against women. 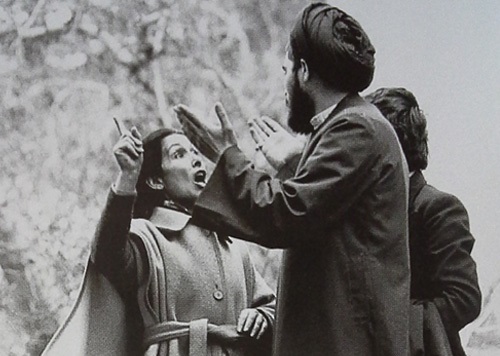 With this slogan, the mullahs’ regime made wearing a “hijab” mandatory through oppression and intimidation. They deprived Iranian women from their basic right of freedom of choice of garment.

On the other hand, the People’s Mojahedin Organization of Iran (PMOI/MEK) as a Muslim organization and the regime’s main opposition, since the revolution, has exposed the regime’s reactionary nature and fought for women’s rights.

The regime’s discrimination has reached such a height that state analysts or the regime’s officials are forced to acknowledge it.

“Many political and governmental groups colluded to oppress women. For example, even women’s protests against the mandatory veil were oppressed,” said Fatemeh Sadeghi, a researcher in the field of women.

In fact, the regime’s gender discrimination has made pressures of life, particularly economic pressure, more unbearable for Iranian women more than at any time.

“The majority of educated women are unemployed,” wrote the state-run Eghtesad News on October 9, 2019. “The Deputy Minister of Economic Studies of the Tehran Chamber of Commerce announced in September 2019, despite the growth of 1,802 active women population in the summer of 2019 compared to the same season in 2018, the share of women in the total active population decreased by about 2% and reached 19.6%. Of course, this decrease in share is due to the increase of about 387,000 active male population during this period,” Eghtesad News added.

Poverty and gender discrimination on one hand, and women’s leading role in the MEK on the other hand, have increased and highlighted women’s role in the nationwide movement against the regime. During the major Iran protests in November 2019, Iranian women not only had an active role in the uprising but, inspired by the leading role of women in the MEK, became leaders of people’s uprising.

“The more we leave the sidelines and reach the core of the matter, which are the youth and women, the position [of protesters] becomes more radical. The reason is that much of the economic pressure is on women. Normally in protests, women are more prudent and even prevent their husbands from participating in protests. But this was not the case this time,” wrote the official IRNA news agency on December 19, 2019.

The Iranian women’s leading and special role against the Iranian regime, and their inspiration by the women of the MEK and their leading role in the opposition, has been proven during the recent uprisings. Thus, it is much more than state media or the regime’s think-tanks point out. Many of the martyrs of the nationwide Iran protests are women. The regime’s media and think-tanks have also acknowledged women’s leading role during the recent uprising.

Iran’s women seeking to bring down the regime

An internal report by the so-called “Rahman Institution,” one of the regime’s think-tanks, titled as “Dead Fire,” reviewed the reasons of the major Iran protests in November 2019. “Footage of these protests published on social media confirm women’s presence. Reports indicate that many of the deceased are women and girls. Although Iranian women had an active role in many popular protests before and after the revolution, but it seems that in the recent decade, especially in November, they experienced a new presence,” read the report.

“When women’s efforts to decrease gender discrimination fails, their reactions gradually become radical. The increasing economic pressure coupled with the increasing of sexual knowledge adds more pressure on women. Therefore, women and girls take to the streets to obtain their rights. These demands push women to move and rebel against the current order. Of course, reviewing slogans chanted during the protests in November indicate that demands are not limited to women and are general,” the report added.

The state-run Fars news agency, an outlet affiliated with the Revolutionary Guards (IRGC), in an article on November 20, 2019, referred to women’s role and their organization during the Iran protests in November 2019.

“Women’s special leading role during recent riots are impressive. In various parts, particularly in Tehran’s suburbs, women, aged between 30 and 35 years, played a leading role in the riots,” read the Fars article.

“The observation by Sobh-e No reporter shows these women with similar clothes, each have a separate duty. One films the riots; another one stops vehicles; and the other, by encouraging people, convinces them to join the riots. The reason that women became leaders of the recent riots is questionable,” the article added.

In another report on December 26, Fars wrote: “In Rafsanjan, leaders of the protests were two girls along with some men. They encouraged people to chant slogans and gather up. A video was published, showing that in a calm gathering in Kohkiluyeh and Buyer Ahmad province, a young girl screams and yells, trying to convince people to join protests.”

What has accelerated women’s movement in Iran, and has not only resulted in their massive and organized participation in the uprisings, but has given them a leading role?
The answer is simple. On the one hand, the regime’s systematic oppression and discrimination and on the other hand, the presence and important role of the Iranian women in the ranks of the Resistance, particularly in the MEK, are the reason for women’s increasing leading role in the Iranian people’s struggle for freedom.

Women in the Iranian Resistance inspire the oppressed women inside Iran and have become their symbols. The Iranian women’s leading role, particularly in the form of the MEK “Resistance Units,” have become the mullahs’ nightmare. A nightmare that will only end when the regime is toppled.