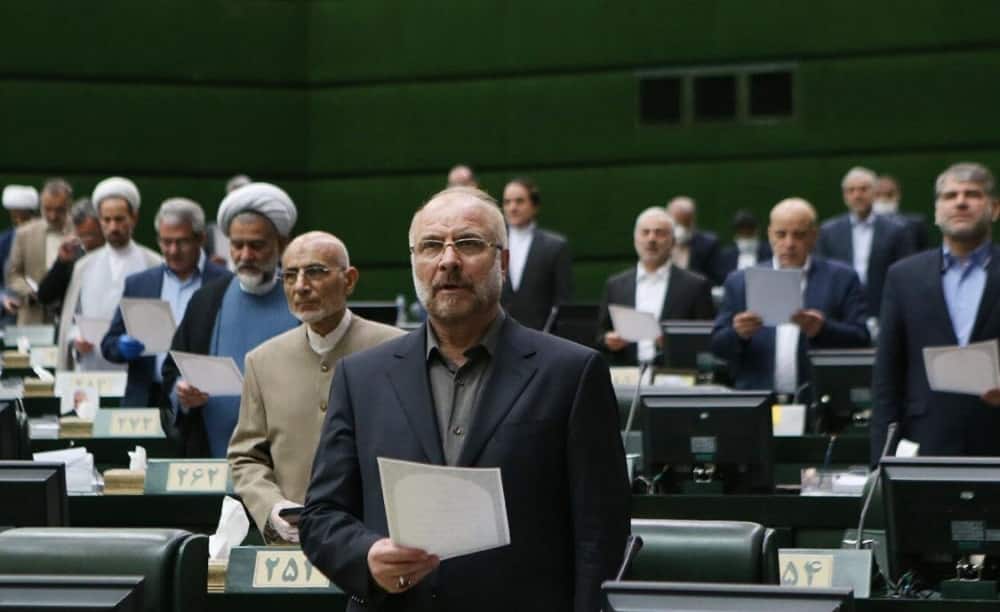 On Wednesday, Mohammad Bagher Ghalibaf, the Iranian regime’s Parliament Speaker, acknowledged the regime’s deadlock and inability to answer the demands of Iran’s restive society.
“There is no trace of management and decision-making in the country. When we hold meetings, we face such a number of issues that no one knows what the solution is,” Ghalibaf said in an interview with the ISNA News Agency on September 15.
“At the peak of claiming we have no money in the country, we spend $160 billion a year only for exploiting fossil energy. Meanwhile, we know that 50% of this fossil energy is wasted, and there is inequality and injustice, creating valleys of poverty,” Ghalibaf added, acknowledging the regime has enough money to address people’s demands and how regime officials and their families only profit Iran’s oil revenues.
“Unfortunately, wherever we go in the country, we have imbalances. We face imbalances in recruitment, the concentration of power, pension funds, imbalances between authority and responsibility. We have $ 110 billion in revenue but face double-digit inflation. We have $20 billion in revenue yet, we see budget deficits and inflation,” Ghalibaf added.

Ghalibaf also acknowledged that “We take important decisions with least information. Therefore, we add problems to the country every day.”

Ghalibaf speaks of corruption, while he is one of the most corrupted officials in the regime. While serving as the regime’s mayor in Tehran, he embezzled billions of dollars. His corruption was even reported in the state-run media. The state-run Sharq daily wrote a piece in May 2017 shedding light on part of Ghalibaf’s corruption.

Who is Mohammad Bagher Ghalibaf, the new speaker of the Iranian regime's parliament

“But how clean is Ghalibaf himself? The most important indicator is the speech of Valiollah Seif, head of the Central Bank. He talked about a 60 trillion rial debt of Tehran municipality to the banking network. A gift of 3.5 trillion rials to the deputy mayor is equal to 31 years’ worth of salary of the workers, which according to the latest decisions of the Labor Ministry, was increased only to 9.4 million rials. Astronomical property is also becoming famous everywhere. This case also had a sad ending and was removed from the parliament’s agenda for investigation. Apparently, in addition to the deputy mayor, according to published statistics, the cost of the house of mayor himself is 200 million rials per meter,” the state-run Sharq daily revealed in May 2017.
The regime’s institutionalized corruption, which has caused poverty and other economic crises, has reached a point where regime officials are forced to acknowledge some aspects of the reality.
“What is the reason that we have many educated by unemployed youths?” asked Mohsen Dehnavai, another member of the regime’s parliament on Wednesday.

“To set up a toilet on the road between Tehran and Mashhad, a young man was running from this organization to another one for nine months. 9 months have passed, and [officials] have come and asked for a hundred permissions,” Dehnavi said.
“Where in the world is like this? There is enough capital, there are unemployed but expert youths, and the country needs them. But some individuals become rich by having connections and obtaining permissions,” Dehnavi acknowledged.
While the regime’s institutionalized corruption has created poverty and unemployed, it has also increased the Iranian people’s hatred toward the regime.
“The worrying thing is that people’s old wounds open up, and people may react restlessly. If these reactions are combined, there will be serious and fundamental concerns [for the system],” Ebtekar daily warned officials on Wednesday.