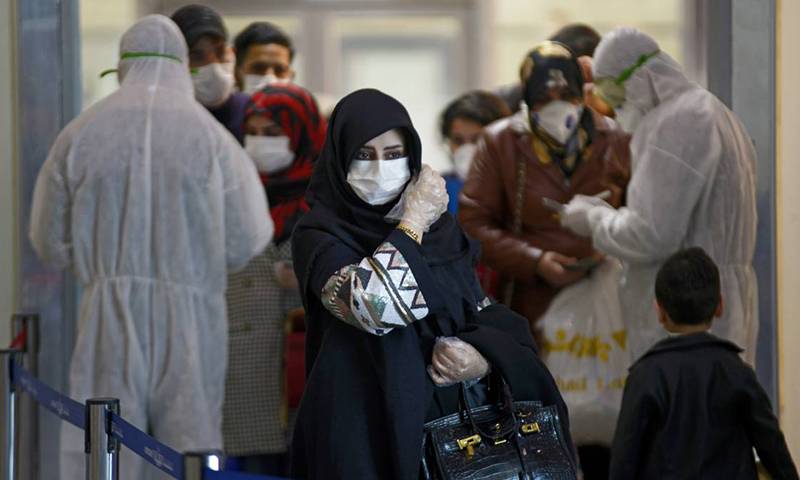 The People’s Mojahedin Organization of Iran (PMOI/MEK) announced on June 7, that over 50,000 people have lost their lives due to the coronavirus outbreak in Iran. This is indeed a tragedy and a humanitarian catastrophe, yet it was evitable. A glance at the regime’s approach and handling of this crisis prove this.

The 11th term of the Iranian regime’s parliament, which is in line with the regime’s contraction policy, and its position, with having many of the Revolutionary Guards (IRGC) and Basij militia commanders as so-called members, confirm the regime’s intention to increase its global terrorism and domestic oppression.

“The Iran wealth, is under the control of IRGC must be wrested out of them” :MEK Resistance Units

“The Iran wealth, is under the control of IRGC must be wrested out of them" :MEK Resistance Units

The second week of the Iranian regime’s new legislature was marked with more infighting among officials of rivaling factions, something that has become a hallmark of the Majlis (parliament). But while regime officials were divided over many matters of state, they all agreed that the country’s economy is in shambles. Further driving the point was the presence of economy minister Farhad Dejpasand, who became the target of MPs for the underperformance of his government.

Dejpasand made it clear during the hearing session that even if oil prices return to their pre-coronavirus levels and the regime manages to export oil as before, the government will still need to rely on “other sources of income,” by which he mainly means taxes on the public. 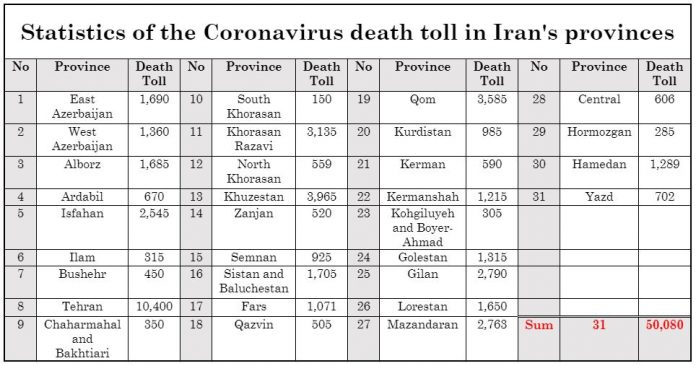 • Deputy Minister of Health: If we are careless, the number of victims may reach two hundred and three hundred thousand
• Asr-e Iran daily: Coronavirus has produced more Iranian victims than the Iran-Iraq war, but it is silent, and this is where we are deceived. We have entered the second wave of Coronavirus, and more deaths are on the way, more than in military warfare
• Mrs. Maryam Rajavi: The loss of lives in these dimensions was preventable. The death toll in Iran is incomparable to other Middle Eastern countries. Khamenei and Rouhani are directly responsible for the growing number of victims and must be held to account

#Coronavirus fatalities in Iran exceeded 50,000 – This catastrophe and such great loss of lives could have been avoided. The death toll in #Iran and even the official figures could not be compared to the death toll in other countries in the Middle East.https://t.co/R5ycsZOc3K

Kurdish political prisoner Zeinab Jalalian has contracted the Covid-19 disease, but the clerical regime’s Intelligence Ministry officials do not allow her to be dispatched to a civic hospital for treatment.

Ali Jalalian, Zeinab’s father, announced: “On Tuesday night, June 2, Zeinab Jalalian was transferred to the prison’s medical center due to severe shortness of breath and after being examined and tested by a doctor, she was diagnosed with Covid-19.”

With seven percent of the Earth’s natural resources, Iran is one of the richest countries in the world.
Iran news indicates that the Iranian economy suffers from endless corruption and thousands of social dilemmas.
The question is, how is Iran’s capital spent that causes so much suffering for the Iranian people?
“We may have given $20-30 billion to Syria,” said former MP Heshmatollah Falahatpisheh.
The regime has also sent 80,000+ Afghan, Pakistani, & Iraqi proxy fighters to Syria, paying them approximately $9 billion.
Iranian regime Foreign Minister Mohammad Javad Zarif once said the regime paid $35 billion to circumvent sanctions and “it’s not clear where the money is now.”
According to the budget deduction report, in 2017, $4.8 billion was distributed among importers who never imported any goods.
Summing up these numbers, at least $70 billion has been stolen from the Iranian people.
This money is equal to:
Creating more than 4.8 billion stable jobs in Iran
1.5 million standards hospital beds
Building 6 million school classes
30-years of cash subsidies for the Iranian people
Free supply of wheat for 20 years means for nine years for all Iranians
Who is to blame for the plight of Iran’s economy? You be the judge.
How is Iran’s wealth spent under Khamenei & Rouhani

Ahmad Sajjadi, a so-called judge in the Iranian regime’s Supreme Court, acknowledged the November 2019 uprising and the role of the opposition People’s Mojahedin Organization of Iran (PMOI/MEK). “Under the gasoline pretext they created unrest across the country, then this turned into insecurity. This was all pre-planned for the entire country and it was carried out from abroad and the [MEK],” Sajjadi said during a state-TV interview on Thursday, June 4.

Monday, June 8, 2020, marks the 207th day since the beginning of the nationwide Iran protests.

THE CONTENT OF THIS PAGE WILL BE UPDATED WITH THE LATEST NEWS UPDATE: 2:00 PM CET Iran: Nationwide and widespread protests by Retirees in 22 cities On...
Read more
Iran News Now

THE CONTENT OF THIS PAGE WILL BE UPDATED WITH THE LATEST NEWS UPDATE: 10:00 PM CET Amnesty International: Mohammad Hassan Rezaiee is hours away from execution https://twitter.com/AmnestyIran/status/1344318039941132289 UPDATE:...
Read more
Iran News Now

THE CONTENT OF THIS PAGE WILL BE UPDATED WITH THE LATEST NEWS UPDATE: 4:00 PM CET Tehran - Health workers at Iran's Medical Sciences Universities gathered...
Read more