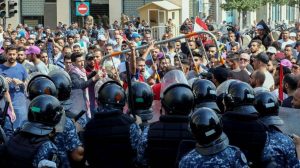 Massive protests erupted across Lebanon following the horrific explosion in Beirut’s port. Young protesters chanted “revolution,” and angry people targeted corrupt politicians, particularly the Hezbollah terrorist organization, which is funded by the mullahs’ regime. These protests have a direct impact on the Iranian regime and its warmongering policies.

In other words, Lebanese people have prioritized cleaning the political atmosphere and getting rid of corrupt politicians, who mostly have ties with the Iranian regime, over any other action, even cleaning the city itself.  People’s protests forced the government to resign, and now people are demanding the parliament be dissolved.

For 40 years, the Iranian regime used the Iranian people’s resources to export terrorism abroad by funding terrorist groups such as Hezbollah. The mullahs’ regime called Lebanon, Iraq, Syria, and Yemen as its strategic depth, because its strategy is warmongering and export of domestic chaos abroad.

Qassem Soleimani, the eliminated commander of the Revolutionary Guards (IRGC) extraterritorial Quds Force, played a key role in implementing the regime’s dominance in the region through proxy groups.

The state-run Aftab-e Yazd daily, while referring to the beginning of a process to expel the Iranian regime from Lebanon, wrote: “The Islamic Republic of Iran was not invited to attend the conference, held virtually at the initiative of France, and with the participation of Arab and non-Arab countries. Experts agree in one case that after the explosion, the incidents move toward weakening Hezbollah.”

The state-run Resalat daily, in an article entitled “A larger threat than the explosion in Beirut,” wrote: “News from Lebanon is disturbing. Some groups have been organized and have attacked governmental buildings, such as the Foreign Ministry and Parliament, and vandalized them. This much of domestic unrest, which will gradually move in a specific direction, along with some politicians’ positions, is not normal.”

The specific direction means the end of the regime’s terrorism and destabilizing acts in the region.

The uprising of the people of Beirut and the beginning of the collapse of the regime’s influence in Lebanon have also had a motivating effect on Iraqi people who have been protesting the Iranian regime’s meddling in Iraq since last October.

The Iraqi October Revolution Organizing Committee in a statement, while expressing its solidarity with the Lebanese people, said: “The explosion in Beirut is demanded by corrupt power-hungry officials, evil mullahs who support them in Iran, and the militias that are advancing the Iranian regime’s plans to control the capitals of the Arab world.” The statement added: “The common goal of the struggle of the Lebanese and Iraqi people … is the recapture of the homeland and its popular sovereignty.”

Thus, the Lebanese uprising is accelerating the process of sweeping the regime from Iraq.

Ali Bigdeli, one of the regime’s experts, said in an article published on November 30, 2019, in the state-run Jahan-e Sanat daily: “The recent incidents in Iraq send different messages. Yet, the most important message is to Iran. If this crisis continues in Iraq, Iran will receive more disappointing messages.”

The rising international isolation of the Iranian regime along with the uprisings in these countries tightens the noose around the regime’s neck and further pushes it into strategic deterioration.

The protests in Iraq, Syria and Lebanon are in line with the nationwide Iran protests in November, which rattled the regime’s foundations, and are major blows to the regime’s pillar of domestic oppression and export of terrorism.

Therefore, it is time for the international community to recognize the Iranian people’s right for resistance and overthrow this regime and end the mullahs’ terrorism by supporting the uprisings in Iraq and Lebanon and by creating an international and united front against the regime’s terrorism.

Struggling with one of the most lethal viral pandemics in modern history, every single country is trying hard to control the invisible enemy. However,...
Read more
News: Iran Resistance

Iranian regime’s officials have been warning one another for years about the potential for a new revolution in the country. They may not express...
Read more
Search