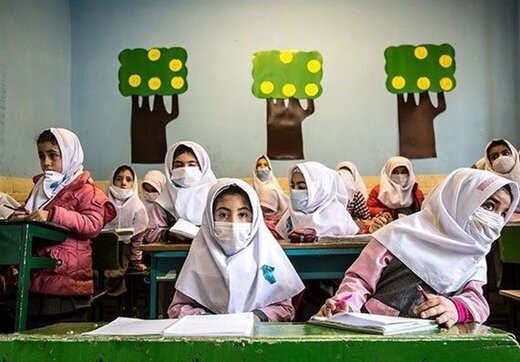 On Tuesday, the Iranian opposition announced that over 100,500 people have died to the COVID-19 outbreak in Iran. While the COVID-19 death toll increases, instead of acting, the mullahs continue using it as a tool of oppression, by forcing children back to school.

It has been seven months since the coronavirus outbreak began in Iran. While tragic footage showed people falling to their deaths on the streets, and the number of infections was rising daily, the Iranian regime continued its cover-up and downplaying of the real extent of this crisis.

The coronavirus rising death toll was preventable if the Iranian regime had the slightest respect for people’s lives. But as the regime’s Supreme Leader Ali Khamenei said, COVID-19 was a “blessing” and “opportunity” for the regime.

The major Iran protests in November shook the regime’s foundations. The regime’s institutionalized corruption, plundering of the national wealth for funding terrorism, and wrong economic policies had put enormous pressure on the Iranian society and turned it into a powder keg. The sudden fuel price-hike caused this powder keg to explode. People poured onto the streets in over 200 locations, and soon their slogans turned political, calling for regime change.

The regime was able to temporarily quell the society by killing 1500 protesters. Yet, protests erupted in January after the Revolutionary Guards shot down a Ukrainian airliner, and people’s unprecedented boycott of the regime’s sham parliamentary elections showed the mullahs’ regime that the situation is not under control.

So came the regime’s savior: COVID-19. A quick glance at the regime’s policies and actions within the last seven months confirms how the Iranian regime deliberately planned to use this virus to further oppress the Iranian society.

For two months, they denied the existence of the novel coronavirus in Iran, and when they were forced to acknowledge COVID-19 has spread across country, they tried to downplay the crisis.

The documents obtained by the People’s Mojahedin Organization of Iran (PMOI/MEK) from the regime’s National Emergency Organization, showed the first coronavirus patients were identified in early January, a month before the regime officially announced the existence of the virus. Later in August, Mohammad Reza Mahboobfar, a member of the Health Ministry’s coronavirus task force, said that coronavirus had started as early as December.

When the public’s awareness forced the regime to acknowledge the existence of this virus, top officials tried to downplay the crisis. Khamenei on March 3 said: “This coronavirus issue is passing. It is not something extraordinary. These kinds of incidents happen in the country. Although I do not want to minimize the issue, but we should not enlarge it either.”

Many of the regime’s officials appeared on TV and claimed they had contracted the coronavirus to say there is no need for people to worry, so the regime should not be forced to declare a national quarantine or pay the price. The regime delayed paying salaries of the health workers who were on the forefront of combatting the virus for months and refused to increase their wages.

Most importantly, the regime’s recent three decisions confirmed the mullahs’ intention of deliberately killing people, including:

As Mrs. Maryam Rajavi, the President-elect of the National Council of Resistance of Iran, said: This scale of the death toll is the immediate result of the criminal and inhuman policies pursued by Khamenei and Rouhani. This was entirely preventable. They are now producing a more massive catastrophe by sending children to school. Khamenei and the Revolutionary Guards do not spend even a fraction of the hundreds of billions of dollars they have plundered from the Iranian people to combat the Coronavirus. Nor do they even pay the salaries of nurses and doctors and medical staff who work around the clock and risk their lives and those of their families to save the lives of patients. Even though the regime’s experts and mid-level officials unanimously describe the opening of schools to be dangerous, by causing mass casualties, the regime seeks to create a barrier against the crisis of being overthrown and overshadow popular uprisings.

But as to the regime’s strategy to quell the society, the state-run Ebtekar daily on September 6 wrote: “It seems that Hassan Rouhani, for obvious and hidden reasons, has distanced himself from society and people as much as he could. But neither he nor his advisors notice that this behavior is the final nail in the coffin of the people’s trust. They do not understand, or they ignore, the devastating consequences of this action. It is good for president’s all security entourage to remember that since November 2019 until now what strange things have happened in our society.”

The Resalat daily wrote on Sunday: “The society should be informed and convinced about this issue [reopening schools]. Opposite to this is what the highest executive authority [Hassan Rouhani] on Friday morning, simultaneous with people, gets informed about the fuel price-hike [which sparked the November protests]. So, naturally, the society resists such a decision and due to some shortcomings, and some parties misusing the situation, those bitter incidents happen again.”