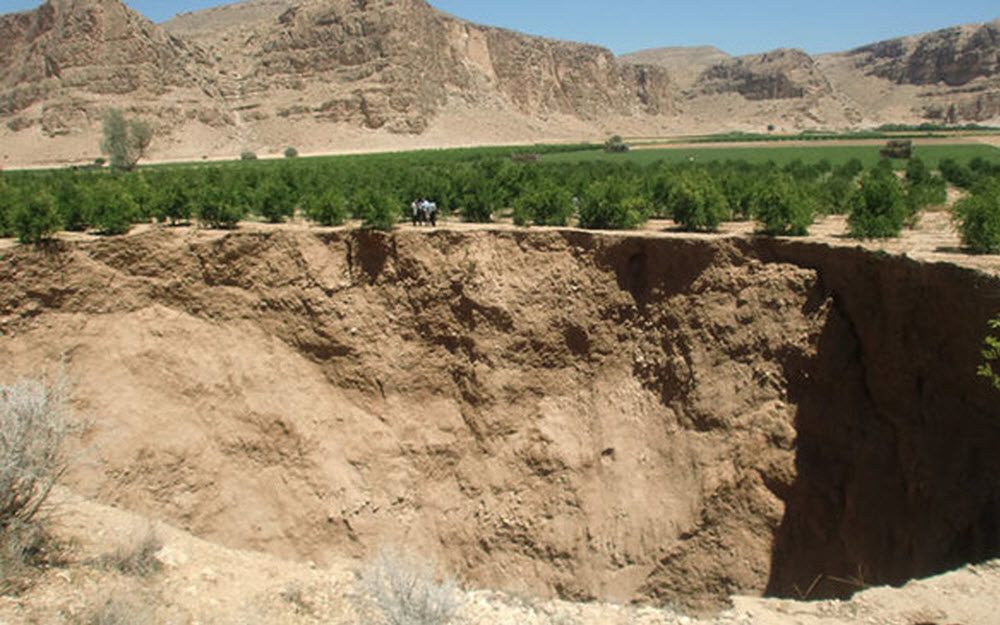 The environmental problems affecting Iran are numerous. There are major problems with drought, dust storms, deforestation, the drying up of lakes, and many more. However, one of the most pressing issues is the state of the land around the country’s capital.

Areas around Tehran have visible large cracks and sinkholes are appearing. This presents an immediate threat to many people who live in the area, as well as to the infrastructure of surrounding areas.

This is happening partly because of a major water crisis that gets worse as times goes on. The city’s population continues to get bigger, while services stagnate or decline as they struggle to cope. Tehran has also been suffering from the major drought that has lasted for three decades so far.

Desertification is also worsening the problems and land degradation is having profound consequences.

The drought has meant that the city’s inhabitants cannot rely on rainfall as a water supply, increasing therefore the reliance on the underground aquifers. However, the aquifers are producing water that is becoming more and more saltier every year.

Although the water supply is rapidly decreasing, much of it gets redirected away from the inhabitants of the city, instead going to agricultural land.

Land around Iran’s capital is falling inwards creating giant holes and sinking land. Experts claim that the land, on average, is subsiding between 22 and 25 centimetres every year. This level is dramatic and even a small fraction of this would be considered a major crisis in many countries around the world.

If the problem continues to grow, which is very likely, the international airport in Tehran could be compromised. As could the major oil refineries in the area as well as the important railways and roadways.

Already, the subsidence has cracked water pipes and buildings, serving as a poignant visual reminder that the situation is critical. Cracks go on for kilometres and there is great concern that buildings are going to collapse.

Iran has been under international sanctions for decades, on and off, and it led to the leaders of the country trying to become self-reliant, especially in terms of food sources. There is no doubt that this is one of the contributing factors to the crisis.

However, the clerical regime’s neglect, and indeed denial, about many of the issues has culminated into damage that is going to take a long time to fix. For some issues though, it has gone far beyond this stage – some damage is quite simply irreversible.

The Iranian regime is destroying its great country in every way possible – socially, economically, environmentally. However, the great people of Iran are determined to bring positive change to their country and they know that regime change is the only way they can achieve this.

If the Iranian regime fell out of power, not only would the war-torn nations in the region be able to move towards resolution, but the people would also be able to enjoy the freedoms and rights that many in the world take for granted. And of course, the environmental issues would not be left to get even worse.

Previous articleIran Regime’s Lies and Concealments in Atomic Projects After the Nuclear Agreement
Next articleIran: President Admits Economy Is in Tatters