El Confidencial the Spanish-language general-information digital newspaper located in Spain, specializing in economic, financial and political news. On October 1st published an informative article about the role of Iranian regime in Syrian conflict, following is the full text:

“IF it WAS NOT for IRAN support, [SYRIAN PRESIDENT BASHAR] ASSAD WOULD HAVE BEEN EXPELLED LONG AGO AND THE SITUATION WOULD BE VERY DIFFERENT” 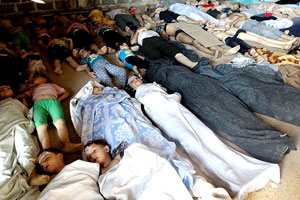 If it was not for Iran, long time ago [Syrian President Bashar] Assad would have been expelled and the situation would be very different now , “says Shahin Ghobadi. The words of this member of the Foreign Affairs Committee of the National Council of the Resistance of Iran , one of the main Iranian opposition organizations, are not too surprising. Yes they are, however, several of the revelations made by this group in a report that was accessed by El Confidencial: that Iran ‘involvement in the war in Syria is much greater than previously thought, to the point which they are Iranian officers who control military operations, and that the number of troops commanded by Iranians far exceeds that of Assad’s own troops.

“Iran is funding the war. It is the Iranian regime who has paid for the tens of thousands of Iraqi foreign mercenaries, Lebanese and Afghan envoys to Syria. Iran has even convinced the Russians to provide a very low price advanced weaponry, “said Ghobadi. “By theway, this has been paid for with unfrozen money after the nuclear deal with Iran , “he told El Confidencial. 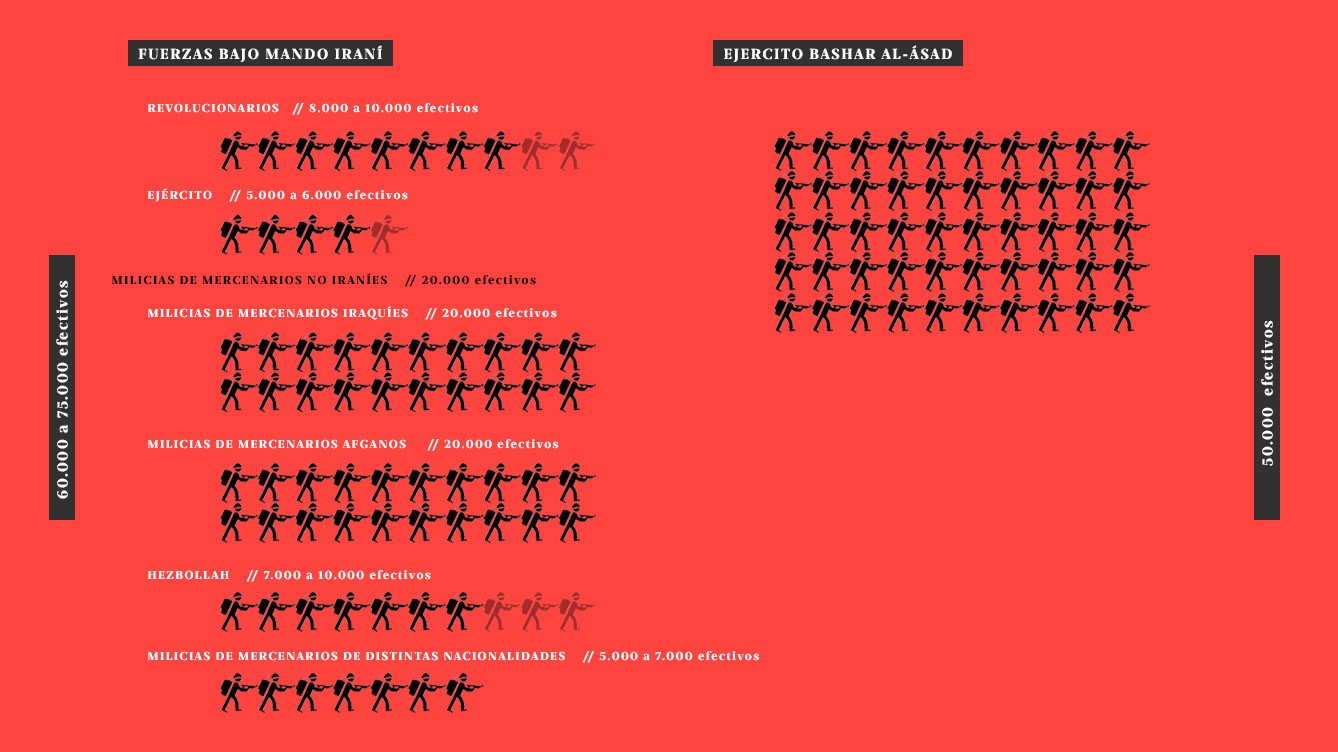 According to the NCRI, Iran has divided the country into five military regions (the central area and the four cardinal points), each under a different command center. The headquarters is in a building at Damascus airport code name is “Glass House”, which, according to opponents, have no access to even Syrian troops. From there, Iranian forces can control the arrival of supplies from Iran or perform a quick evacuation if the insurgents were to take the Syrian capital. In addition, foreign fighters, such as Hezbollah , the Shiite militias in Iraq and Afghanistan or Palestinian volunteers do not follow the orders of Syrian generals but of the commanders of the Revolutionary Guards ( ‘Pasdaran’) .

“Basically, this exposes the extent of their involvement, which is not limited to a small party of advisors . This information makes it clear that Iran is the one who is conducting the war in Syria, it is them who lead and control. So far, their number had been widely underestimated, “said Ghobadi. “The information has come from sources and network of informers of the Organization of the People ‘s Mujahedin [Mojahedin-e-Khalq, or MEK], the main Iranian resistance group. We have a network inside Iran, especially among regime officials, and also very specific within the Revolutionary Guards. And we’ve confirmed with multiple sources, “said Ghobadi.

There is no doubt that the National Council of the Resistance of Iran is far from a disinterested source in this conflict. This organization is based in Paris, and is considered a kind of Iranian secular government in exile,  which serves as a political platform for five opposition groups, including the MEK which is known for its efficiency in uncovering the secrets of the Iranian regime: it was this organization who in 2002 revealed the existence of underground nuclear facilities at Natanz and Arak, which marked the beginning of the crisis on Iran ‘snuclear program . 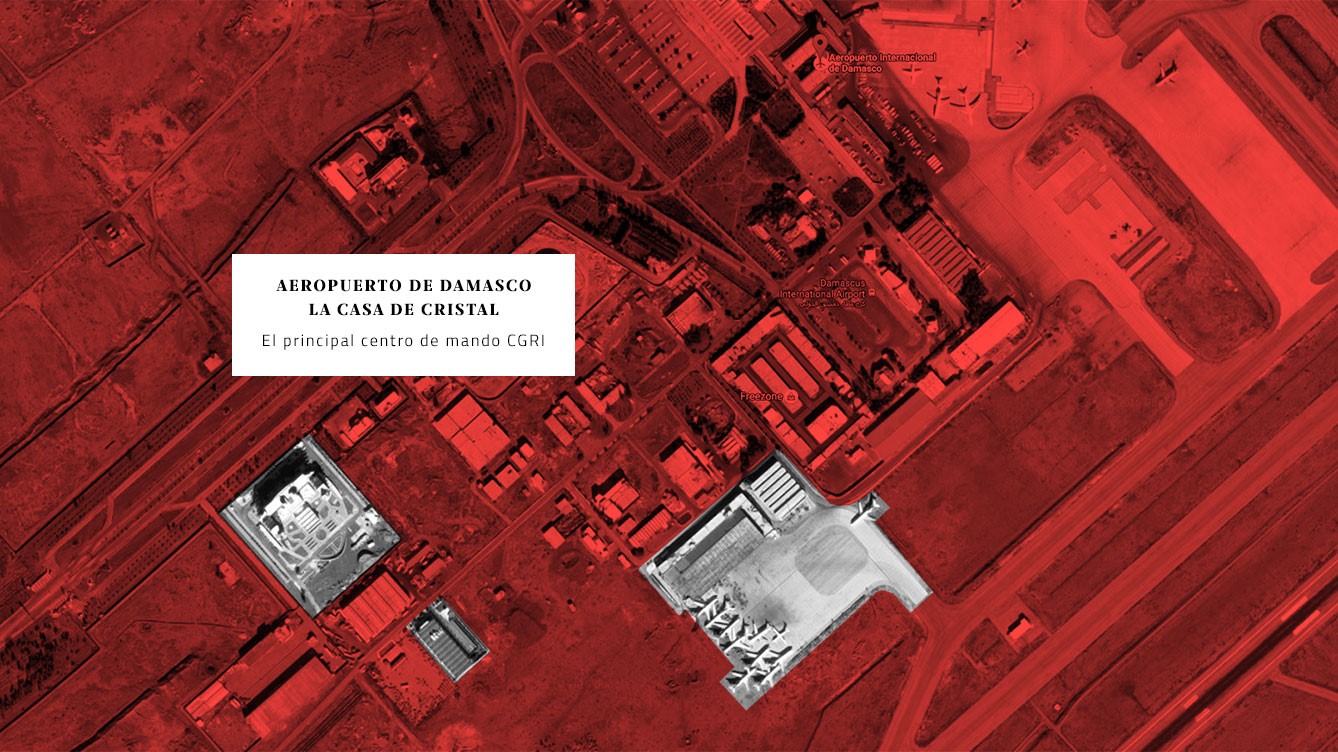 “What is true they explain. For some time now, Iran has been deeply involved in the Syrian conflict and in Iraq. They are trying by all means to keep alive the Shiite axis Iran-Iraq-Syria-Lebanon and are throwing the rest. In fact everyday Iranian military are fighting alongside the Syrian army and Hezbollah , “a military intelligence and security expert consulted by El Confidencial .”The data numbers were not known exactly, but consistent with expectations. Iranian casualties have been substantial personnel and materials, “he says.

So does Colonel Pedro Baths, an expert in geostrategy who has been observing in detail the conflict in Syria from the beginning. “There are data that are very wordy and detailed, that are not known even by analysts dedicated to the subject, but the whole is perfectly credible,” he says. “The news reaching us is that hardly there is a day that a senior colonel or general does not die in the Syrian front, and when top officials are killed obviously there are also lower – ranking troops. There is also talk of an airlift established to nurture Shiite fighters and Assad’s forces. So all this would come within the framework of the logic of what is developing in the Syrian-Iraqi conflict “he says.

One of the most striking statements in the report is the one that ensures that combatants under Iranian control outnumber the regular army of Assad, whose troops are around 50,000.According to estimates by NCRI, in Syria between 8,000 and 10,000 members of the Revolutionary Guards and between 5,000 and 6,000 Iranian regular troops, from 7,000 to 10,000 members of Hezbollah, and between 40,000 and 47,000 additional militants from other countries are fighting which, even in the smallest cases, it gives a minimum of 60,000 combatants. 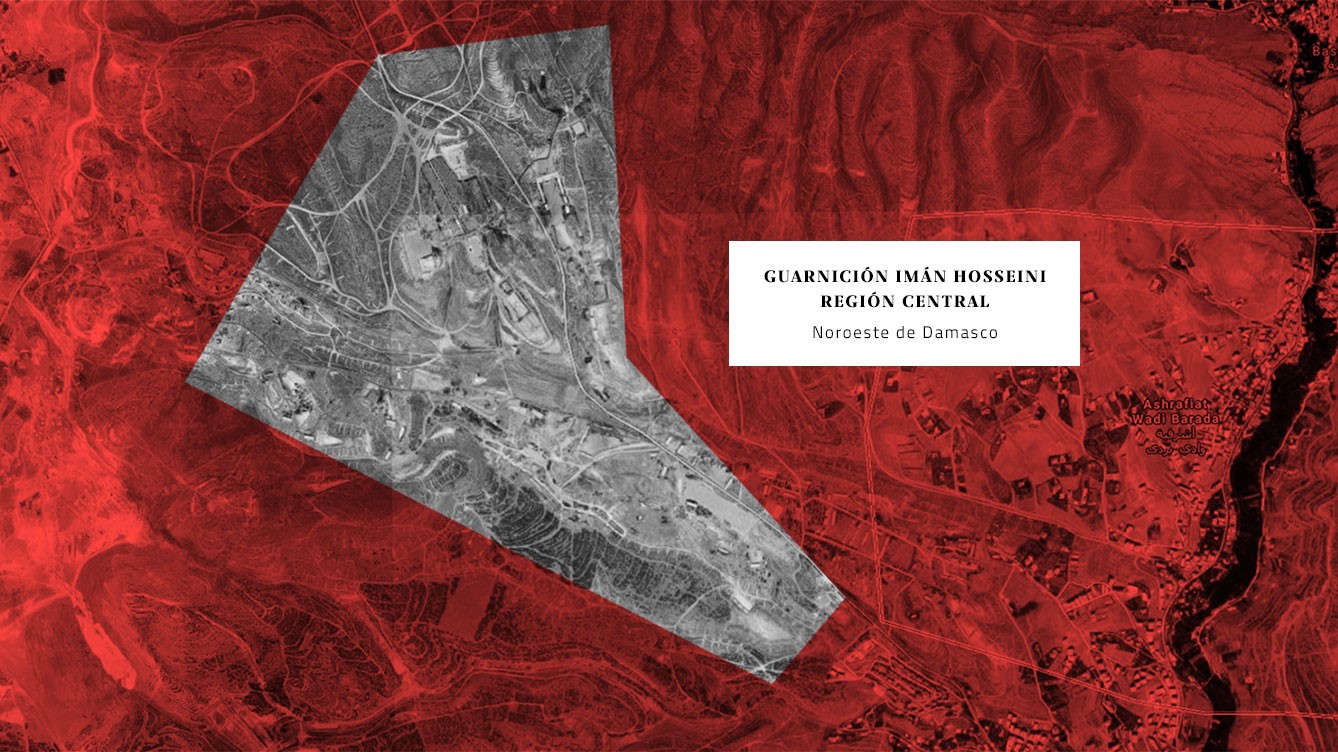 Moreover, according to opponents, it is them who bear the brunt of the fighting. “The Syrian army does not fight, all the weight of combat is carried by the Iranians and their mercenaries. The Syrians are only there as local guides to lead others to locations “insists Ghobadi.”The fighting is so intense that the Syrian regime does not trust his soldiers. The situation is very tense, and could be defecting. So it’s Hezbollah or Iraqi militias that fight, “he adds.

It is not the only one who says that Assad’s army is dedicated primarily to collect bribes and terrorize the local population , but is quite deficient in the battlefield. In early September, Mikhail Khodarenok, a retired Russian military expert and semi – official publication Gazeta.ru said it was impossible to reform the Syrian armed forces. “Assad’s generals do not believe their troops could bring order to the country without foreign military aid. They do not plan large – scale operations, there is  lack of ammunition and modern equipment, and the fear of suffering large losses and a negative result of this fight , ” Khodarenok wrote .

“When Iran realized the profound problems that Assad had, Qassem Soleimani [the chief commander of the Revolutionary Guards] went to Russia and asked Putin to get involved . The Russians would bomb targets for Iran to facilitate progress on the ground, “said Ghobadi. “Both countries share the same strategic perspective. But while Russia has regional interest, for the Iranian regime it  is a matter of survival , “he says. 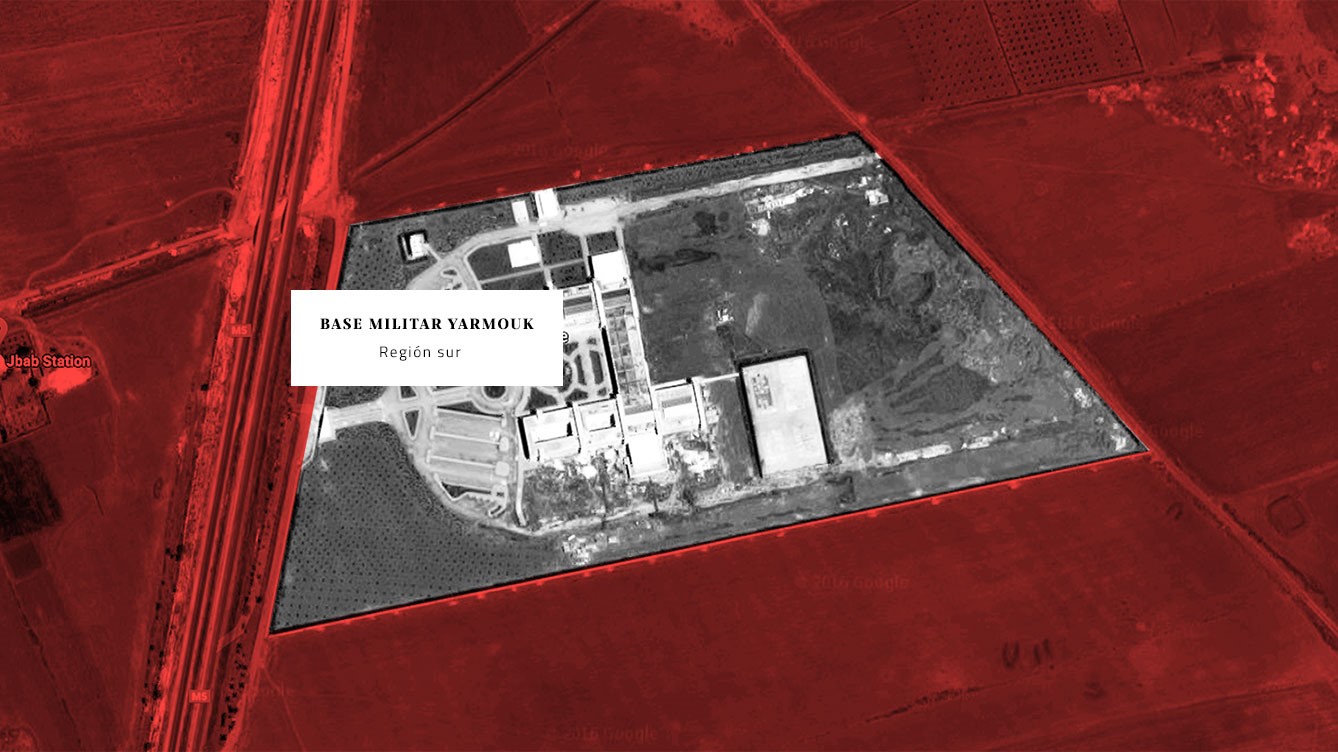 “One indication of the importance of the war in Syria for Iran is the level of participation of the Revolutionary Guards. Most senior commanders have been sent to Syria and are participating in the fighting, as Hossein Hamedani, who died in Aleppo last October , “he says. It is far from being the only senior Iranian official fallen into Syria.

“Iran is deeply involved in Syria, for many reasons. There is an obvious religious motivation, which is the defense of Shiism, but also keep in mind that during the war between Iran and Iraq, the only country that supported Iran was Syria, and those things are not forgotten, “says Pedro Bathrooms.”And now, with the approval of the international community, Iran is taking control of much of the Middle East against the Sunni powers in the Gulf, in countries like Yemen, Lebanon, Iraq, and also, of course, Syria “he says. 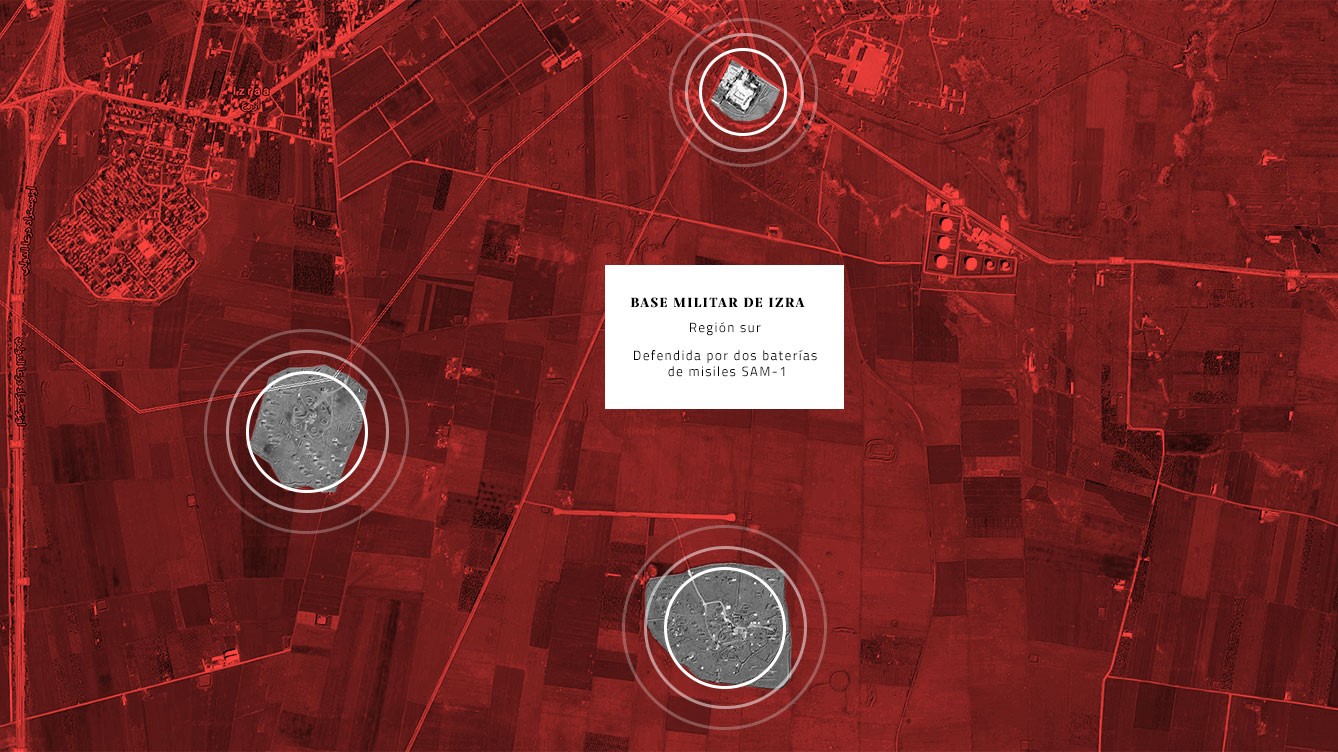 “Think that today clashes between powers are not carried out directly, but through interposed many actors,” says Banos. “In this case there is a confrontation between the major regional Gulf powers, Saudi Arabia on the one hand and Iran on the other, a struggle for power , but also predominating one of the two major branches of Islam , ” he says.

But Ghobadi says that for Iran, the issue goes far beyond a mere matter of regional strategy. “The Iranian regime sees his present prominence is largely based on the survival of Assad. In February, [Ayatollah] Ali Khamenei said: ‘If we do not fight in the cities of Syria will have to fight against the opposition in our cities’. This proves the importance they attach to this conflict. This is much higher for Iran than mere regional politics, “said opposition spokesman. “They believe that if they withdraw, they will see their own fall very quickly.”

Previous articleChildren encouraged with war and violence in theme park in Iran
Next articleIran regime’s police chief:  2,000 ‘immodestly’ dressed people are arrested daily in Tehran and some other provinces