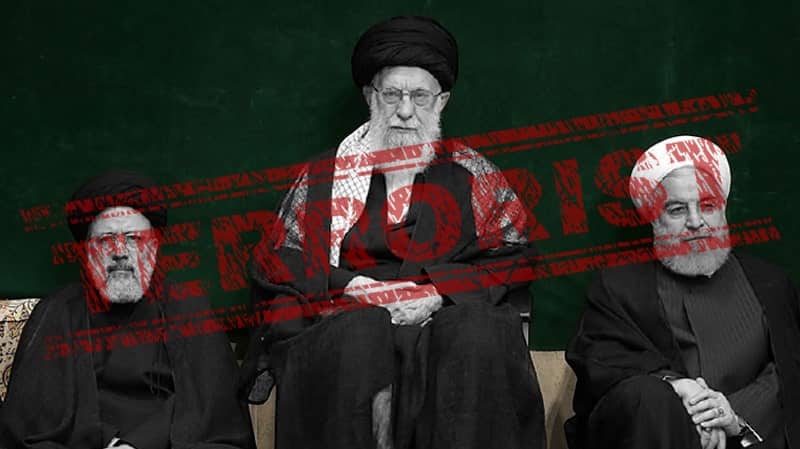 In a statement posted to Twitter, the Iranian Resistance’s president-elect, Mrs. Maryam Rajavi welcomed news of a guilty verdict in a Belgian court case of Iran’s diplomat-terrorist by saying, “Conviction of the regime’s terrorist diplomat… represents the conviction of the entire clerical regime.” The verdict in question was for the former third counsellor at the Iranian regime’s embassy in Vienna, Assadollah Assadi, and it served to confirm that he was the mastermind of a 2018 terrorist bomb plot targeting Resistance activists on Western soil.

Assadi’s casefile established that he had personally smuggled explosives into Europe while traveling on a diplomatic passport and then met with two co-conspirators in order to provide them with the weapon and accompany instructions. Those would-be bombers, Nasimeh Naami and Amir Saadouni, were captured while attempting to carry the bomb from Belgium to the target venue, a convention center in the Paris suburb of Villepinte. A third individual, Mehrdad Arefani, infiltrated that space separately and was arrested by French authorities.

Following a two-and-a-half-year investigation, the four participants in the bomb plot went on trial together in November. Prosecutors sought to maximum sentence of 20 years for Assadi and slightly lesser sentences for his co-conspirators. On Thursday, the judge complied with those recommendations, giving 18 years to Naami, 17 years to Arefani, and 15 years to Saadoumi, as well as stripping all three of their Belgian citizenship.

The outcome of the case was roundly praised by those who had been at risk of harm from the plot. These included Mrs. Rajavi and tens of thousands of Iranian expatriates who had traveled to Paris in 2018 for the annual Free Iran rally. But it also included numerous policymakers, scholars, military officers, and security professionals from throughout the world who had also participated in the event to show support for the platform of regime change and democratic governance espoused by the National Council of Resistance of Iran (NCRI).

A number of those political dignitaries had submitted affidavits to the Belgian court as civil parties in the case against Assadi. In so doing, they sought to emphasize both the potential scope of the attack and the fact that it was part of a much larger pattern of behavior by the Iranian regime and its representatives in the Western world. The proceedings highlighted this latter point by presenting evidence that Assadi’s diplomatic status had aided him in cultivating a network of assets and prospective operatives that extended far beyond the three individuals who attempted to help him carry out the 2018 bomb plot.

Receipts and a journal were recovered from Assadi’s vehicle which showed that he had provided cash payments for unknown services to individuals in at least 11 European countries. Along the way, he had also recorded information about various points of interest including some that already come to the attention of Western agencies as potential sources of logistical and financial support for terrorist groups like Hezbollah.

These facts vindicate longstanding calls for an assertive shift in Western policy. Mrs. Rajavi reiterated this message in the wake of Thursday’s verdict, as did numerous American and European lawmakers and foreign policy experts who took part in virtual conferences to discuss possible next steps that their governments could take. Former US Secretary of Homeland Security Tom Ridge praised the Belgian court’s decision and accompanying statements from Western leaders but noted that “rhetorical condemnation without further action will be of little impact on this rogue regime, which heretofore has been totally unwilling to change its behavior.”

Various other commentators attributed that aversions to change to a pattern of conciliation or outright appeasement in Western dealings with the Iranian regime. Reflecting upon that trend in the wake of Thursday’s verdict, former US Senator Robert Torricelli said, “I do not know how European leaders who have Iranian embassies in their capital can continue as if nothing has happened.”

Former Undersecretary of State Robert Joseph expressed much the same sentiment in the form of a warning: “More concessions to the regime will only bring further injustice to the Iranian people and more terrorist acts.” The perceived relationship between these two outcomes stems from the fact that the 2018 terror plot emerged in the aftermath of a major anti-regime uprising inside Iran at the beginning of the year, which was violently suppressed by the regime’s repressive forces like the Islamic Revolutionary Guard Corps.

That repression ultimately proved inadequate to prevent what Mrs. Rajavi called a “year full of uprisings.” It also seemingly failed to compensate for the effects of the regime’s acknowledgment, at the height of the uprising, that the People’s Mojahedin Organization of Iran (PMOI-MEK) was organizing the uprisings. This flew in the face of many years of propaganda which discounted the Resistance movement as marginal and lacking in organizational strength. By extension, it revealed a level of anxiety among the regime’s leadership which has also been highlighted in the context of urging more assertive Western policies.

Former Columbian presidential candidate Ingrid Betancourt emphasized that anxiety in her remarks on the Assadi verdict and the underlying pattern of Iranian terrorism. “The sheer madness to kill thousands of civilians shows the fear of the regime of being overthrown by its own people,” she said.

That fear helps to reveal to Western policymakers the potential effectiveness of taking a hard line with the Iranian regime. It suggests that by isolating the regime diplomatically and financially, the international community could support what could be a more successful anti-regime uprisings inside Iran. And that possibility is further underscored by the fact that the uprising at the start of 2018 was not the only one of its kind. In the subsequent three years there have been four others, including one in November 2019 which spanned nearly 200 cities and towns.

For Western governments, the lessons of these uprisings are potentially related to the lessons of the Assadi case. But those latter lessons are vitally important in their own right, and they indicate that regardless of the outcome inside Iran, it is necessary for Western security that Iran’s international networks be scrutinized, isolated, and dismantled.

In service of that goal, one of the first things the international community can do is impose sanctions and travel restrictions on Iran’s Foreign Minister Mohammad Javad Zarif, whose role as the overseer of all Iranian diplomats means that he was aware of Assadi’s activities, and most likely complicit in them. From this starting point, Western governments can move on to pursue accountability from other high-ranking authorities in the Iranian regime, in line with Belgian prosecutors’ observation that they directed Assadi to undertake his terror plot on European soil. He was surely neither the first nor will he be the last to receive such orders unless the international community makes concerted efforts to prevent more of the same.

As Robert Joseph put it in the NCRI’s remote conference on Thursday, “If the leaders of free societies fail to hold the perpetrators responsible, including at the highest levels in Tehran, it will only encourage more terrorist attacks and make us complicit in them.”