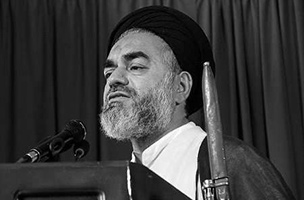 NCRI – Failure to conform to the Islamic Republic’s dress code, including wearing the mandatory black ‘chador’, or veil, causes women in Iran to become sick and suffer from illnesses in the intestines and stomach, a senior cleric of the Iranian regime has said.

“The state should make education of the chador mandatory right from the start, since this will allow school pupils to grow up with modesty and they will see its effects in society,” said Seyyed Abolhassan Mahdavi, who holds the rank of Ayatollah in the regime and sits as a member of the Assembly of Experts, a clerical body of 88 senior mullahs who are tasked with appointing the regime’s Supreme Leader.

Mahdavi, who is also the regime’s Friday prayers leader in Isfahan, central Iran, and the Supreme Leader’s representative in the Red Crescent, made the remarks on Monday in an interview with the state-run Fars News Agency.

He claimed that young girls are growing up in their homes with a “shameless attitude”, and this “shamelessness is now becoming widespread in schools.”

He added that all teachers should be held accountable for the “shameless attitude” of girls in their schools.

“Currently, our brain guides us toward the chador which is the best dress for women in Islamic society since it covers the body of women from head to toe and does not draw attention,” he said.

“It is clear that freedom of thought can only come about for people when they are properly dressed, and modesty will come with the wearing of a black chador, such that it protects the human soul from evil deeds.”

“People’s freedom of action is permitted to the extent that it does not disturb society’s freedoms. … The proper dress for women in society is a black veil so that the rights of others are respected.”

“Today everyone has come to realize that if the minds of people in society are preoccupied, they cannot concentrate on their work.”

“According to doctors, illnesses in the intestines and stomach begin as a result of such frenzied emotions and spread to other organs of the body. Therefore if people care about their physical health, they should wear the most appropriate dress which is the black chador,” he added.

The Iranian regime’s Interior Ministry last month issued a directive stating that women’s veil should be a “chador or loose under-knee long dress with long sleeves without any marks, cloth trousers, and a large scarf that covers the head, hair and neck with conventional colors. Unconventional jewelry should not be used. No makeup is allowed.” Male employees should also “refrain from wearing T-shirts, tight or short-sleeve shirts, tight trousers or jeans, clothing with Western marks, ornaments, wide belts with unconventional buckles, and unsuitable hair and beard designs”.

In a conference in Berlin earlier this year to mark International Women’s Day, Iranian opposition leader Mrs. Maryam Rajavi stated that the advancement of the ideal of equality in the world today is faced with a formidable barrier, Islamic Fundamentalism, which is endangering the entire Middle East and the world through genocide, terrorism and discrimination and more than anything is hostile to women.
Mrs. Rajavi, President-elect of the National Council of Resistance of Iran (NCRI), added: “Fundamentalism is not a face-off between Islam and the West nor a confrontation between Islam and Christianity and Judaism, or a Shia and Sunni conflict. The crux of the conflict is between freedom versus subjugation and dictatorship, between equality on the one hand and tyranny and misogyny on the other. Fundamentalism has placed misogyny at its core and through suppressing women it intimidates and suppresses the entire society.”