NCRINational Council of Resistance of Iran
EN FR DE IT AR ES AL
HomeBlogOp-edConvicted Iranian Diplomat Was Only Part of a Terror Network That Must...
BlogOp-ed 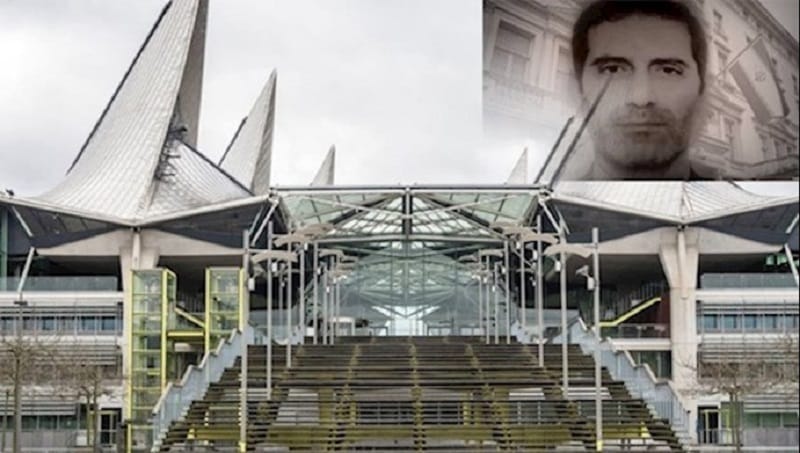 It was announced this past week that there would be no appeal of the February conviction for Assadollah Assadi, the high-ranking Iranian diplomat who masterminded a plot to set off explosives at a gathering of Iranian expatriates near Paris in 2018. Although the plot was thwarted, its details suggest that the death toll would have run into the hundreds, if not the thousands and that casualties would have most likely included any number of European and American dignitaries who attended to show their support for the National Council of Resistance of Iran and its leader, Maryam Rajavi.

Assadi’s case was handled by the government of Belgium, where two of his co-conspirators resided as Iranian-Belgian dual nationals. The couple had personally met with Assadi in Luxembourg to receive high-power explosives that he had smuggled from Iran into Europe using a diplomat pouch on a commercial flight. At that meeting, Assadi reportedly instructed them to place the device as close as possible to Mrs. Rajavi, who delivered the keynote speech at the target event. This fact arguably underscores the court’s finding that Assadi was acting not on his own accord but at the behest of authorities high within the Iranian regime, who have long recognized the NCRI as a serious challenge to their own hold on power.

This, in turn, places the 2018 terror plot in the context of a much larger framework, which the European Union and its member states should be keenly aware of as they set policy toward Iran in the days and years to come. The absence of an appeal in Assadi’s case presumably brings that matter to a conclusive end. But the general phenomenon of Iranian state terrorism remains plainly unresolved and will remain that way for as long as the EU refuses to demand accountability from leading regime authorities.

Even Assadi’s 20-year prison sentence was by no means a foregone conclusion, given the history of Western permissiveness with regard to all manner of Tehran’s malign activities. Shockingly, the former third counselor at the Iranian embassy in Vienna was the first Iranian official to even face prosecution in Europe for his terrorist activity, even though many others have been credibly accused over the years. In some cases, as in the aftermath of the 1990 assassination of Dr. Kazem Rajavi, the older brother of the Iranian Resistance Leader Massoud Rajavi and Iran’s first ambassador to the United Nations in Geneva after the 1979 revolution, suspected perpetrators of foreign attacks were actually released from European custody and returned to Iran, with the apparent aim of preserving the status quo in Iranian-European relations.

Such incidents have helped to generate a sense of impunity among Iranian authorities, thereby setting the stage for the proliferation of Iranian intelligence assets and terrorist sleeper cells throughout the world. The 2018 plot against the Free Iran rally was one consequence of this situation, and it was not the only one to be recognized in that same year. About three months earlier, Iranian operatives were caught planning to deploy a truck bomb against a community that had been established in Albania by members of the NCRI’s main constituent group, the People’s Mojahedin Organization of Iran (PMOI/MEK). And in August 2018, two Iranians were indicted in the US for surveilling MEK activists as a precursor to further terrorist plots.

It stands to reason that the persons involved in each of these incidents are only a small part of a much larger network, which still poses a threat to European citizens and interests. In fact, this was seemingly confirmed at the time of Assadi’s arrest in Germany, which led to the recovery of documents showing that he had held clandestine meetings all across the continent, often providing operatives with cash payments for services as yet unknown. Furthermore, the recently leaked audio of an interview with the Iranian regime’s Foreign Minister Javad Zarif corroborated a point made by multiple European authorities in the wake of the arrest, namely that Tehran routinely uses its diplomats and embassies as cover for terrorist activity.

“The Foreign Ministry’s agenda has been a political-security agenda since the beginning of the revolution,” Zarif said after acknowledging that most of the Ministry’s ambassadors have security or paramilitary background, often as operatives in the ultra-hardline Islamic Revolutionary Guard Corps. Zarif went on to say that his Ministry does not operate on its own and has never challenged the will of the Supreme Leader. In this way, he seemed to anticipate remarks offered by the regime’s President Hassan Rouhani several days after the leak made international headlines.

In the context of praising the unity among different factions and branches within the Iranian government, Rouhani highlighted the Supreme National Security Council as part of an “exact system and framework” for collaboration over matters of foreign policy. “Whether we want to carry out a defensive operation, or whether we have to carry out an offensive operation somewhere, or whether we want to undertake important political task…They will definitely be discussed in the SNSC,” he said.

This is noteworthy because even as the investigation into Assadi’s terrorist activists was still ongoing, the NCRI clearly highlighted the role of the SNSC in setting the stage for the attack and establishing cooperation among leading political authorities, clerics, and the regime’s diplomatic missions. Its centrality to all matters of Iranian foreign policy was cited as a clear reason why republic’s President Rouhani, Supreme Leader Khamenei and Foreign Minister Zarif should all be held responsible for the attempted killing of Iranian expatriates and their supporters on European soil.

This notion was recently endorsed by members of the European Parliament representing several different countries, each of whom signed a statement calling attention to the Assadi case and to other Iranian terrorist activities and human rights abuses, then urging the EU to “comprehensively reassess its policy on Iran.”

More specifically, that statement recommended that European policymakers move to designate the IRGC and the Iranian Ministry of Intelligence and Security as terrorist entities on the basis of their systematic infiltration of Iranian embassies and other supposedly peaceful institutions. For the same reason, the statement concluded that diplomatic relations with Iran should be downgraded and that embassies should be closed in their entirety if the regime will not make verifiable commitments to ending its program of state terror and dismantling its terrorist networks throughout the world.

Additionally, the international community could take the immediate step of launching an investigation into the context of 2018 terror plots as well as the role that Foreign Minister Zarif played in overseeing the security assets whose extensive presence in Iranian embassies he has lately acknowledged. Depending on the evidence that such an investigation yields, the stage could very well be set for Zarif and others to face charges in European countries as well as at the International Criminal Court.