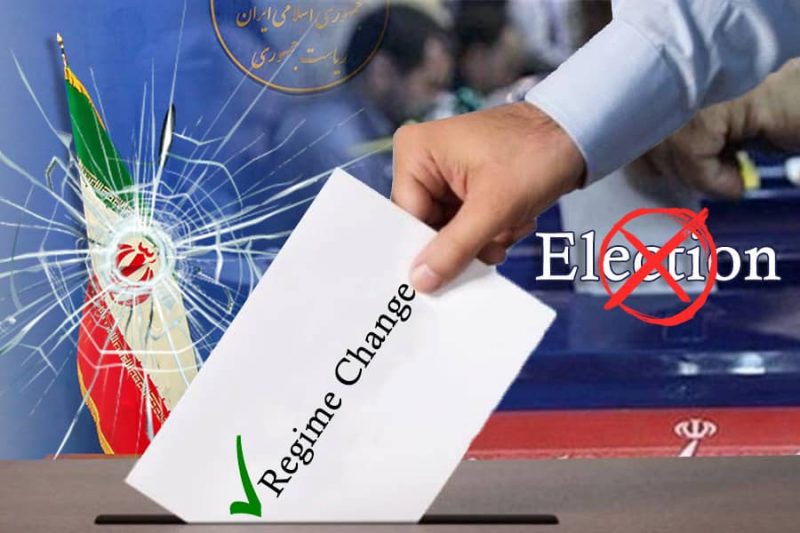 Iran’s sham presidential elections will be held on June 18. As the election date approaches, the regime’s infightings increase. Thus, state-run media warn of the consequences of the factional feuding.

These so-called “reformists” are the regime officials that have been actively engaged in the export of terrorism and human rights violations. The so-called “moderate” and “reformist” President Hassan Rouhani has a dark record of oppression and export of terrorism. During Rouhani’s tenure, nearly 5,000 people have been executed, 1500 protesters during the November uprising were gunned down, and Rouhani’s diplomat-terrorist Assadollah Assadi is serving 20 years in prison in Belgium for his attempt to bomb the opposition rally in 2018.

Mostaghel’s article then warns that these factional feuding that the massive elimination of candidates will benefit the Iranian Resistance movement and could cause protests.

“Do they know that their action creates wide rifts in the system that the enemy will use? Didn’t [Khamenei] remind 2009 [uprising] that was the result of creating a rift in the body of the system during the elections?” Mostaghel daily wrote, adding, “Have we not witnessed a chain of social protests in the country during the last four months, accompanied by sharp political slogans? And do we not know that the spread of these protests has dangerous and irreversible security consequences?”

Mostaghel then reflects the regime’s fear of Iran’s organized opposition, the People’s Mojahedin Organization of Iran (PMOI/MEK), and its role in mobilizing Iran’s restive society toward regime change.

“Why the [members of the rival faction] do not see that the sworn enemy of the system, the MEK, who have no desire but the [regime’s] overthrow call for riots and protests daily? Don’t they see that this old enemy has invested in creating rifts, even in the run-up to the presidential election?” Mostaghel daily adds.

Why is Khamenei eliminating the rival faction’s candidates?

On March 21, Khamenei said: “about the presidential elections, the last word is that our dear nation should not see the elections as a symbol of bipolarity.”

In February 2020, Khamenei and his Guardian Council disqualified many candidates, even those who had been members of the parliament for two or three terms. Khamenei’s goal was to allow those close to him to enter the Majlis (parliament).

Two major Iran protests in 2018 and 2019 rattled the regime’s foundations. As the Iranian society grows more explosive due to the economic and social problems, Khamenei decided to unipolar his regime as a part of its contraction policy and have his elements in the power circle.

In other words, the Guardian Council will be able to eliminate even the already-qualified candidates who could damage Khamenei’s policy of contraction.

In this regard, Mostaghel daily warned: “If the Guardian Council wants to repeat the process of the February 2020 parliamentary elections, it will create the same huge rift in the system that the enemy yearns. Since the first days of the revolution, hasn’t this been the MEK’s dream to create a rift at the head of the [regime]?”

Mostaghel then admits: “The situation is much more sensitive now than in the past. A look at the enormous living problems of the people, the unprecedented unemployment, the Covid-19 crisis and the lack of vaccination, and a thousand and one other social problems, ‌ has created the best situation for the MEK to recruit members from among the young people who are tired of the current situation. Now it is enough to widen the gap in the pyramid of sovereignty; This is what the enemy exactly is looking for.”