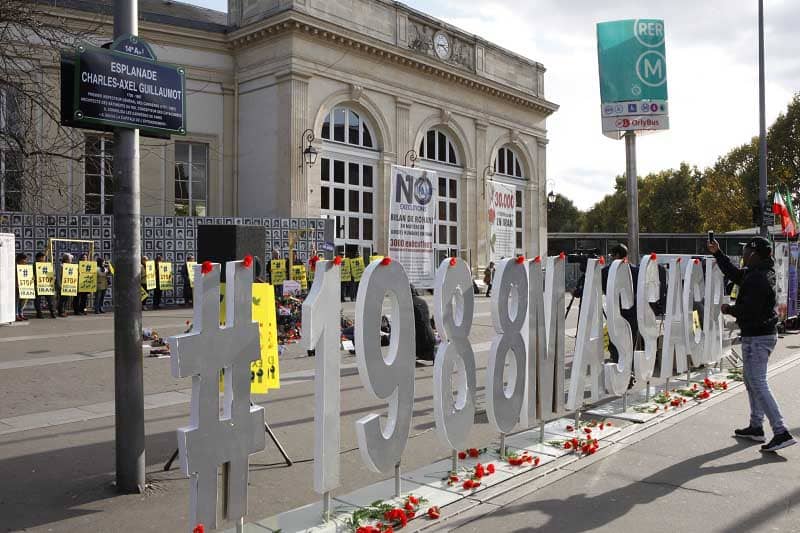 Although the final make-up of the ballot has yet to be decided, it is widely assumed that Iran’s top candidate to run the next presidential administration is its current judiciary chief, Ebrahim Raisi. If his candidacy is ultimately successful, the Iranian regime will have handed its second most powerful position to someone who is guilty of severe crimes against humanity. That outcome seems very likely, given that Raisi is reportedly the favorite of the regime’s Supreme Leader Ali Khamenei, who appointed him to head the judiciary in 2019. But even if he ultimately loses or declines the presidency, his recent ascendance has already clarified just how much impunity the regime feels it has in matters related to the 1988 massacre of political prisoners.

In 1988, the leadership of the Iranian regime developed a particular obsession with stamping out pro-democracy opposition groups that might have attempted to exploit the regime’s vulnerability. Then supreme leader Khomeini issued a fatwa declaring that anyone who is a member or supporter of the main opposition group, the People’s Mojahedin Organization of Iran (PMOI/MEK), should be considered an enemy of God himself and he or she must be executed.

Four-member bodies were assembled which eventually came to be known as “death commissions” and they were tasked to implement the killings in the prisons. Anyone who either failed or refused to renounce the MEK was sentenced to hang, and the sentences were promptly carried out in batches before victims were taken away in refrigerator trucks to be buried in secret mass graves.

By most accounts, roughly 30,000 prisoners were executed in this way over the course of just several months in 1988, but specific details of this massacre remain somewhat scarce, largely because the graves have not all been conclusively identified, much less unearthed. In fact, some may never be, since Iranian authorities have initiated a number of construction projects over the years which were intended specifically to destroy mass grave sites that had been tentatively identified by the MEK and the families of the massacre’s victims.

This practice continues to the present day and recent reports indicate that the regime has lately set its sights on a section in Tehran’s Khavaran Cemetery where a number of the massacre’s victims are believed to be buried. Last week, that cemetery became the gathering place for dozens of survivors and relatives of the victims, as they renewed their efforts to bring both domestic and international attention to this unresolved crime against humanity.

The protest was preceded by a letter that was sent to United Nations Secretary-General, Antonio Guterres. It said in part: “The Iranian public and all human rights defenders expect the United Nations, particularly the UN Security Council, to launch an investigation into the massacre of political prisoners and summon the perpetrators of this heinous crime before the International Court of Justice.”

The subsequent protest elaborated upon this point by expressly identifying one of the individuals for whom such prosecution is especially urgent. Signs and chants in Khavaran Cemetery declared Ebrahim Raisi the “henchman of 1988,” underscoring the fact that he was hand-picked by then-Supreme leader Ruhollah Khomeini to contribute to the Tehran death commission, thereby making him responsible for a majority of the total number of executions.

Of course, it is not just his unique culpability that makes Raisi’s prosecution so urgent; it is also the fact that his ongoing ascendance through the regime’s hierarchy is a prime example of the impunity that is driving the regime’s destruction of mass graves, its refusal to answer questions about the history of the massacre and its overall trend of human rights abuses – a trend that has only worsened in recent years.

Last December, Tehran’s ongoing refusal to engage in any dialogue over the massacre was confirmed with the publication of an open letter by seven UN human rights experts. The letter was initially sent to leading Iranian officials, but they ignored a 90-day window for a response and thus triggered the experts’ implicit appeal for international action on the issue in absence of any sort of internal investigation by Iranian authorities.

The letter was greeted as a “momentous breakthrough” by Amnesty International, insofar as it acknowledged prior international failings and urged policymakers to make up for the adverse impact on Iran’s sense of responsibility and prospective consequences. After noting that the Security Council and the Human Rights Commission never followed up on a December 1988 resolution that recognized the upsurge in politically motivated executions, the letter said: “The failure of these bodies to act had a devastating impact on the survivors and families as well as on the general situation of human rights in Iran and emboldened Iran to continue to conceal the fate of the victims and to maintain a strategy of deflection and denial that continue to date.”

Deflection and denial have also helped to create a situation in which Iranian authorities feel comfortable continuing to reward the main perpetrators of the 1988 massacre for their commitment to repression and brutality. Raisi is only one evident example of this. Others include both the current and the former Minister of Justice and this makes it abundantly clear that the mentality behind the 1988 massacre is the same mentality that is guiding Iran’s response to political dissent and social unrest today.

It is no doubt because of the sense of impunity regarding 1988 that regime authorities felt comfortable opening fire on crowds of protesters in November 2019, killing 1,500 people in a matter of days. And the lack of an immediate, decisive international response to that incident may have in a sense cleared the way for detention facilities to systematically torture those who were arrested during that unrest, for months afterward.

Much of Tehran’s current behavior has surely been influenced by the lack of accountability for its worst crimes against humanity. The regime has been flaunting its impunity for a very long time, but in recent years it has become more blatant. By appointing death commission members as the country’s top legal authorities, it has communicated a philosophy of law enforcement that prioritizes the violent repression of peaceful organizations. And now, by putting forth one of the leading perpetrators of the 1988 massacre as the prime candidate for the presidency, it is sending the message that the entire regime runs on that same philosophy.