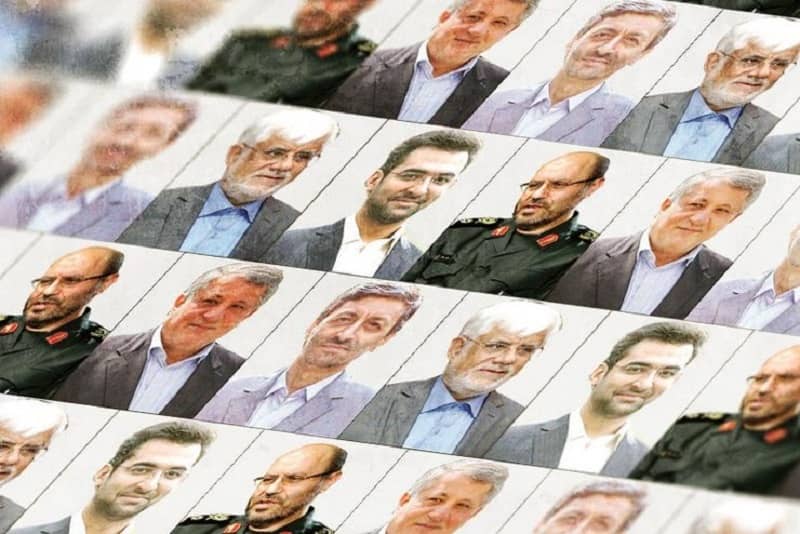 Registration for Iran’s regime sham presidential election ended last week, and it is widely assumed that Ebrahim Raisi will be firmly established as the frontrunner. The longtime clerical judge and current head of the Iranian judiciary are understood to be the candidate favored by Supreme Leader Ali Khamenei, and as a result, several other prospective candidates have signaled that they are willing to drop out and support him. Unsurprisingly, no establishment figure has raised many concerns about Raisi’s background – a fact that underscores the regime’s across-the-board endorsement of his legacy of brutality.

Raisi’s well-known enthusiasm for corporal punishment has given him a reputation as one of the most hardline figures who could lead the government’s executive branch. Having served for just over two years as the head of its judiciary, he has reinforced that reputation by overseeing more than 500 executions, as well as the torture of thousands of political detainees, particularly in the wake of nationwide anti-government protests in November 2019.

Several months after that uprising, Amnesty International published a report titled “Trampling Humanity,” which detailed the systematic use of beatings, floggings, electric shocks, chemical burns, mock executions, and so on. Separately, the human rights advocacy group confirmed that Raisi’s tenure as judiciary chief had coincided with an increase in the use of capital punishment specifically as a tool for suppressing dissent. But he has by no means been the only one to step up the use of political violence over the past few years. The actions of various other leading figures clearly reflect the hardline mentality that is guaranteed to guide the presidency in the coming four years, even if another candidate manages to overtake Raisi.

If any candidate were to do so, it would most likely be Ali Larijani. The longtime member of the Islamic Revolutionary Guard Corps is part of the largest ever body of presidential candidates representing that hardline paramilitary. Their joint efforts to secure the presidency are indicative of a larger pattern that has seen the IRGC consolidate political, social, and economic power with the help of the regime’s Supreme Leader Ali Khamenei.

Who is Ali Larijani?

Iran-Iraq war helped many Guards to become accustomed to the institution’s goal of exporting the Islamic revolution, and in Larijani’s case, the mission evolved afterward to include the dissemination of propaganda and the obstruction of dissenting voices as the head of the state media outlet, Islamic Republic of Iran Broadcasting. For 10 years beginning in 1994, he helped to cultivate the climate of censorship that remains in place across Iran to this day and continues to find new outlets in the era of social media.

During the November 2019 uprising and other recent, large-scale protests, there have been reports of the internet being cut off in its entirety for large areas of Iran, and in at least one case, for the country as a whole. Such efforts to control public discourse reflect the ongoing legacy of professional censors like Larijani. And he is not the only one to register as a candidate for the sham presidential election.

Ezzatollah Zarghami also served as the head of IRIB for 10 years, overlapping with Larijani’s tenure as speaker of the parliament. Having previously served as a radio broadcaster for the IRGC, Zarghami was seemingly eager to apply his paramilitary training to his state media role, and so from 2004 onward, there was an apparent increase in the number of instances of IRIB broadcasting video of forced confessions by activists and dissidents. That practice also continues to this day, and it received special attention last year with the execution of champion wrestler Navid Afkari, who was tortured along with his brothers after participating in anti-government uprisings, then executed over a murder he could not have committed.

Afkari’s death helped to shine additional light on the judiciary’s open contempt for human rights under Raisi’s leadership. And beyond that, it showcased the continuity between that body’s obsession with dissidents and the similar mentality that has long been on display among IRGC officers, state broadcasters, and other leading regime institutions and individuals.

The clerical regime tries in vain to extinguish the flames of protests by destroying the tombs of #NavidAfkari & other martyrs. Just as the victims of the #1988Massacre became famous despite destruction of their graves. Justice will not let go of the criminal mullahs’ regime. pic.twitter.com/dfOLjlYllF

That repression was on prominent display even before reports of systematic torture began emerging. Whereas the judiciary took the lead in keeping up the pressure on activists after the fact, it was the IRGC that set the stage during the 2019 uprising when, over just several days, they fatally shot approximately 1,500 peaceful protesters and innocent bystanders. Although Iranian officials have attempted to downplay the incident, Amnesty International confirmed that when IRGC gunmen opened fire on crowds in dozens of different localities, they were shooting to kill.

Now the regime has embraced the candidacy of an unprecedented number of people whose status within the IRGC means they are inextricably tied to this and other crimes against humanity. In so doing, Iranian authorities have signaled two things: that they have no sense of shame or regret regarding attacks on their own people, and that they have little fear of consequences being imposed on them by the international community for such incidents.

This latter message is all the more troubling when one considers that attempts to crack down on a democratic opposition have actually extended beyond Iran’s borders. In June 2018, about six months after nationwide protests four Iranian operatives including a high-ranking diplomat were caught attempting to carry out the bombing of a rally for a “Free Iran” that was organized just outside Paris by the National Council of Resistance of Iran.

That terror plot was actually only one of several that were uncovered that same year, and the eventual prosecution of the diplomat-cum-terrorist Assadollah Assadi established that he had cultivated a network of operatives spanning much of Europe.

Whether Iran’s next president is Raisi, Larijani, or someone else, there can be little question that he will support the continued operation of that terrorist network, right alongside the continued crackdown on domestic advocates for a democratic alternative. With this in mind, Western policymakers should avoid repeating the mistake of 2013, when many assumed that Iranian affairs would be improved following the election of the least of several evils. This was naïve then, and it is even more naïve now when the conflict between the Iranian regime and its people has escalated dramatically.

There are no “reformists” in the Iranian establishment at all. If Western policymakers want to support anyone during this race, it ought to be those Iranian activists who are pushing their compatriots to boycott the election altogether and to make it clear that their vote “is for regime change.”