Iran Is on the Cusp of a New Era, More Uprisings Are on the Horizon 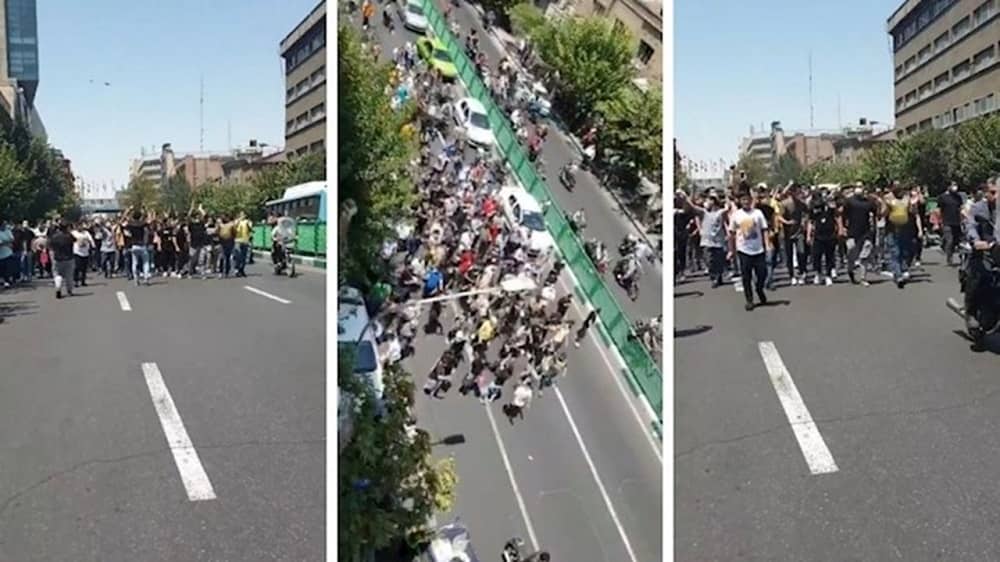 Protests erupted in Khuzestan province, southwest Iran, twelve days ago. These protests were initially due to the severe water shortages in this province. But soon these protests intensified, and people started targeting the regime’s top officials in their slogans. They chanted “down with the dictator,” and “Down with Khamenei,” the regime’s Supreme leader. These protests have now spread to dozen Iranian cities, including Tabriz and Tehran, with people calling for regime change. The regime has arrested dozens of people in different cities and according to the Mujahedin-e Khalq (MEK), 12 people were killed by the security forces. Yet, protests continue to spread and intensify.

Western powers and the international community should think of August 5 as the deadline for a change in policy toward the Iranian regime. That is the day when the regime’s President Ebrahim Raisi is scheduled to inaugurate. The ultra-hardline figure is recognized as having perpetrated a number of crimes against humanity throughout his career, and it is widely anticipated that his leadership of the executive branch will coincide with a new increase in malign behavior both at home and abroad.

Raisi’s background and his likely presidential initiatives make it both a moral and a practical imperative for the regime’s traditional foreign adversaries to reconsider their policies around the time of his inauguration. In the first place, pressure on the new president may help to forestall the sorts of human rights abuses that he has had no qualms about using to suppress dissent and safeguard the clerical regime’s hold on power. Additionally, such pressure would go a long way toward challenging the regime’s typical expectation of impunity – an expectation that has unfortunately been fostered through decades of conciliatory Western policies.

Iranian pro-democracy activists highlighted the faults in these policies last weekend at the Free Iran World Summit, a globally live-streamed event organized by the National Council of Resistance of Iran. They were joined in that endeavor by more than 1,000 political dignitaries who took part in the summit from all across the world. Dozens of American and European lawmakers delivered speeches affirming the need for an imminent change of policy and singling out Raisi as the greatest single contributor to that need.

The First Day of the Free Iran World Summit 2021
The online summit of Iranians from 50,000 locations in 105 countries, including gatherings in 17 countries#Iran #FreeIran2021 #ProsecuteRaisiNOW pic.twitter.com/crpoFMW5zF

Mark Demesmaeker, a Member of the European Parliament representing Belgium, said on the second day of that three-day event, “That Ebrahim Raisi has been installed as president instead of being prosecuted for crimes against humanity is a tragic demonstration of the international community’s failure to address the structural crisis in Iran.”

His comments closely echoes those of a statement issued by Amnesty International the day after Raisi’s June 18 “election.” Maryam Rajavi, the president-elect of the NCRI, called attention to that statement in discussing Raisi’s pending inauguration on the third day of the summit. Her speech declared him to be guilty by his own admission, having publicly defended his role in what may have been the Iranian regime’s worst crime against humanity.

In 1988, Raisi was the deputy public prosecutor in the capital city of Tehran. That summer, he was directed to join the “death commission” responsible for interrogating political detainees at Evin Prison and determining which of them would live and which would die. As with death commissions throughout the country, Raisi’s tribunal rarely deemed anyone to be sufficiently loyal to the theocratic system, and the vast majority of those who came before it were hanged and then buried in secret mass graves.

It is believed that nationwide, the 1988 massacre of political prisoners claimed over 30,000 victims, most of them members of the Peoeple’s Mojahedin Organization of Iran (PMOI/MEK). Raisi and other prominent officials have, in recent years, acknowledged the effort to stamp out that opposition group, sometimes characterizing it as a religious mandate and “God’s command.” The massacre also set the tone for the regime’s broader treatment or organized opposition groups, especially the MEK. At the time, the killings stemmed from a fatwa by then, supreme leader Ruhollah Khomenei which declared the MEK guilty of “enmity against God.” That same charge has been used on countless subsequent occasions to justify capital punishment when not violent crime has been committed.

Such practices have grown worse in recent years, as was to be expected from the fact that the regime’s Supreme Leader Ali Khamenei betrayed longstanding regime propaganda to acknowledge a mounting threat to the ruling system. In the midst of a nationwide uprising in January 2018, Khamenei stated that the MEK had planned for months to facilitate the unrest and popularize anti-government slogans like “death to the dictator.” Warnings about the MEK’s growing influence have proliferated ever since and have proven to be warranted in the wake of several developments, not least of which was an even larger uprising in November 2019.

But at the time of that uprising, Khamenei had appointed Raisi as head of the judiciary. In that capacity, he oversaw what may have been the worst single crackdown on dissent since the time of the 1988 massacre. About 1,500 peaceful protesters were killed within days of unrest breaking out across nearly 200 cities and towns. At least 12,000 individuals were arrested, and many of them were systematically tortured for months afterward at the hands of authorities that answered to Raisi.

Mrs. Rajavi pointed to that crackdown as further evidence of Raisi’s clear guilt, and identified his inauguration as a “litmus test” for the international community’s commitment to principles of human rights and universal accountability. This is to say that in the Raisi era, more than any other, world powers will have a clear choice to make between dealing with the clerical regime and standing on the side of its people and their democratic Resistance. And insofar as August 5 represents the inflection point between a history of rampant human rights abuses and a future defined by much more of the same, it should not be difficult to recognize Raisi’s inauguration as a call to international action in defense of his once and future victims.