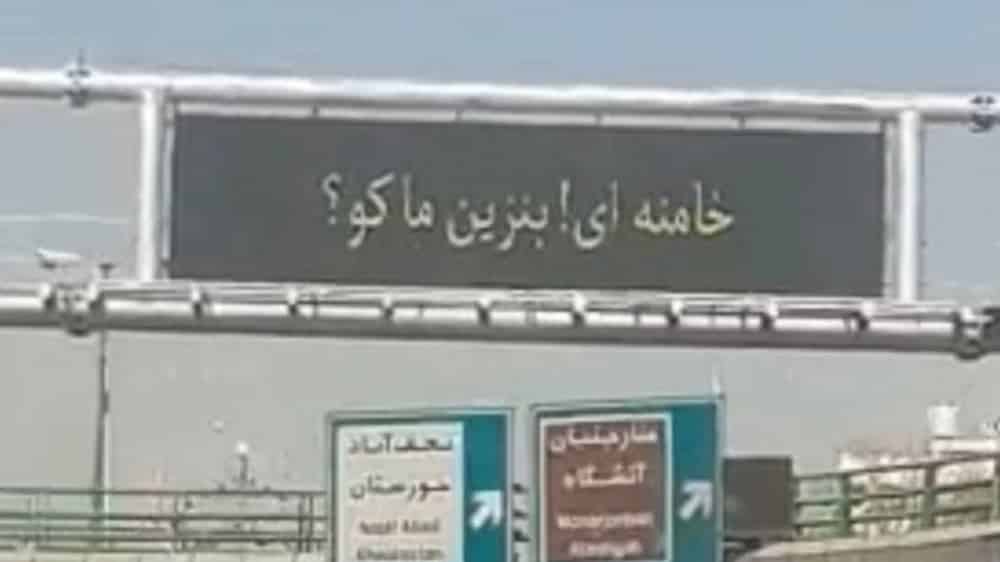 Iran’s state media reported that a massive cyberattack disrupted the sale of gasoline on Tuesday, creating long queues at gas stations across the country and increasing public dissent. This incident came weeks before the anniversary of major Iran protests in November 2019.

A billboard in Isfahan was filmed as asking the regime’s supreme leader Ali “Khamenei, where is our gasoline?” This incident, among increasing public dissatisfaction over the interruption and long queues, terrified regime officials.

#IranProtests
"Khamenei, where is our gas?" read on digital traffic signs in #Iran, referring to the regime's killing of more than 1,500 peaceful protesters in #BloodyNovember 2019.

While there have been many speculations recently that Tehran is going to increase the fuel price, the regime’s Interior Minister, Ahmad Vahidi, rushed to the scene and vehemently denied any attempt to raise the fuel price.

Many energy experts in Iran had called the increasing of fuel price “inevitable” as the only solution for “increasing gasoline production capacity.” Yet, they have also warned about the social consequences of increasing fuel prices.

On Monday, he claimed that since “in Iran, the per capita consumption of gasoline is many times higher than other countries, the price of gasoline must be increased” so the regime could “compensate part of the budget deficit.”

It is worth noting that in recent months, the Iranian regime has shipped tons of fuel to Lebanon to decrease pressure on its terrorist proxy group, Hezbollah, amid Lebanon’s financial and fuel crisis and people’s protests against Hezbollah’s devastating role in their country.

The Iranian regime has one obstacle in implementing its plan: Popular uprisings. Protests erupted in November 2019 following the sudden fuel price hike across Iran. In less than a few hours, protests expanded across the country, with people calling for regime change and attacking the mullahs’ centers of plunder and repression.

Tehran finally controlled the situation by killing over 1500 protesters. But according to regime officials, this nationwide uprising rattled the regime’s foundation. This fear explains the rapid reaction by regime officials to the recent disruption at gas stations. Many state-run outlets have also warned about the consequences of rising fuel prices.

“Officials do not ask what will happen to a large section of society, which is still under economic pressure with the possible increase in gasoline prices,” wrote the state-run Arman daily on October 23.

“All or a significant part of the price increase is due to mismanagement. Since people can see that after three decades, they have to pay the costs of the officials’ recklessness and since inequalities have increased, they can no longer tolerate the situation. Thus, it is not a good time to increase the fuel price,” Arman daily warned regime officials.