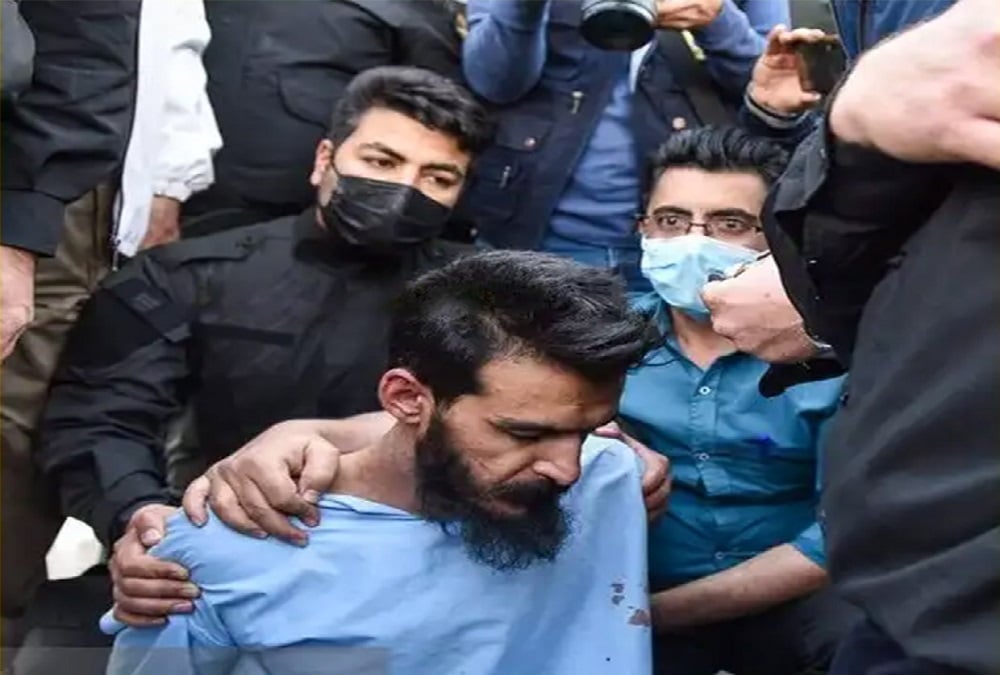 Blindfolded and handcuffed, they brought him to a square in Shiraz, where he would later be hanged in public. He was 28 years old, full of life, and had a future ahead of him, but in a few moments, he would be swinging in the air, suffocating to death.

This was the tragic fate of Iman Sabzikar, a deprived construction worker who was executed in public last week for standing up for his rights. He was convicted of allegedly killing a high-ranking police officer in February 2022 who had harassed Iman and blackmailed this deprived worker for years. The corrupt police officer was protected by the regime’s law and enjoyed systematic impunity in Iran.

Iman’s cruel hanging in public is part of Iran’s new wave of executions. On July 28, Iran’s ruling theocracy hanged a soldier in Rasht, northern Iran, for allegedly killing a high-ranking officer. In addition, three other prisoners were hanged in Sanandaj prison, northwestern Iran.

On Wednesday, the clerical regime hanged four other prisoners, including three women, in different prisons across the country. In other words, there have been eight hangings in two days.

On July 25 and 26, the regime hanged two prisoners in Isfahan and two others in Shiraz, bringing the number of executions from July 23 to 26 to 17. It is worth noting that on July 23, 11 prisoners were hanged across Iran.

Iran: 10 executions in one week

Iran’s ruling theocracy began its killing spree a few days after it took power in 1979. Mass arrests, torturing of dissidents, and executions have become the regime’s pernicious tool to oppress Iran’s society, which has always yearned for democracy.

Executions are part of Iran’s genocidal regime’s strategy to secure its rule. To that extent, July 7 marks one of the darkest chapters in Iran’s history, when thousands of political prisoners were massacred in 1988.

In the summer of 1988, the regime’s then-Supreme Leader Ruhollah Khomeini issued a fatwa to exterminate Iranian dissidents. As a result, the so-called “Death Commissions” were formed across Iran, which sent over 30,000 political prisoners to gallows. Most victims were members and supporters of the regime’s arch enemy, the People’s Mojahedin Organization of Iran (PMOI/MEK). Khomeini decided to massacre thousands of Iranian youths in a bid to strengthen his regime’s grip on power, as he faced a war-torn but volatile society amid the regime’s increasing international isolation.

The increasing number of executions in Iran is not haphazard. They are the genocidal regime’s carefully planned attempt to quell the society, as protests by people from all walks of life, continue expanding across the country. In other words, these executions are the regime’s disingenuous or simply delaying tactics to postpone a looming uprising.

What allows the regime to continue its crime against humanity is the international community’s inaction vis-à-vis Tehran’s atrocities, which have rendered a “crisis of impunity.”

This crisis reached its height in June 2021, when Ebrahim Raisi, who sat on Tehran’s death commission in 1988, became the regime’s president. In reaction to Raisi’s presidency, Amnesty International’s Secretary General Agnès Callamard said:

“That Ebrahim Raisi has risen to the presidency instead of being investigated for the crimes against humanity of murder, enforced disappearance, and torture, is a grim reminder that impunity reigns supreme in Iran.”

In a letter published in December 2020, seven United Nations experts also criticized the world community’s “failure” to hold the perpetrators of the 1988 genocide accountable “had a devastating impact on the survivors and families” and the general human rights situation in Iran.

Human rights violations are an inseparable part of Iran’s ruling theocracy, and the world community’s inaction helps the regime to continue its atrocities.

In its latest report on July 28, Amnesty International underlined, “The number of executions in Iran in 2021 was the highest since 2017. The rise began in September 2021, after the head of the judiciary, Ebrahim Raisi, rose to the presidency and the Supreme Leader appointed a former Minister of Intelligence, Gholamhossein Mohseni Ejei, as the new head of the judiciary.”

As long as impunity reigns supreme in Iran, Iranian youth like Iman Sabziakr will be deprived of their fundamental rights. Once they protest, they are further harassed as the law protects criminals in Iran.

Iman could have continued and enjoyed his life like thousands of other youths killed by the regime. But he became the victim of the regime’s impunity. Hasn’t the time come, to end this ominous phenomenon in Iran?