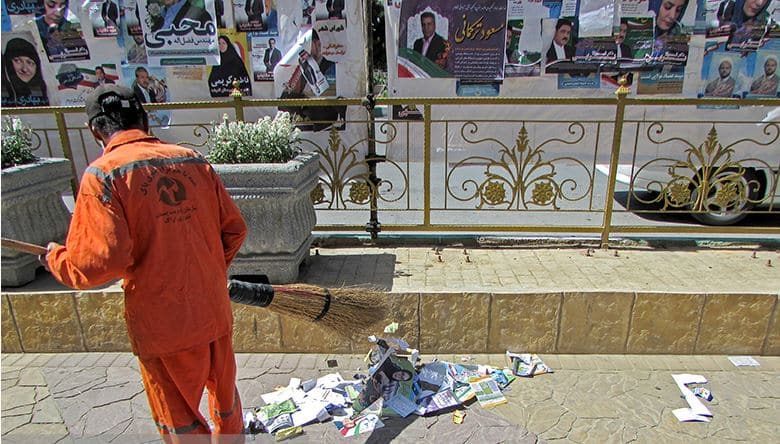 Registration ended this week for candidates in Iran’s sham presidential election. Regardless of the candidates and the vote, in reality, the outcome will be the product of a system that is designed to reflect the will of the theocratic supreme leader.

The 12 member Guardian Council will vet the candidates and only those loyal to the regime’s supreme leader will be approved.

This all helps to underscore the safeguards that the regime is enforcing and refining as part of its constant effort to maintain unbroken continuity of hardline thought and policy.

Indeed, that loyalty and that ideological purity are explicitly identified as criteria for the Guardian Council’s approval of candidates to high office. Those criteria apply with equal force to candidates from the “reformist” faction, and they demonstrate just what a misnomer that label is.

The election and its outcome in the clerical regime tend to reflect the internal balance of power within the regime and the labels of “reformists” or “hardliners” have no meaning in reality.

Over the past eight years, regime’s President Hassan Rouhani has been the standard-bearer for reformists, and his administration has overseen no significant changes in the conduct of Iranian authorities either at home or abroad. As a matter of fact, the average rate of executions during the Rouhani era was higher than the average during the eight-year presidency of his “hardline” predecessor, Mahmoud Ahmadinejad. The Rouhani era also coincided with some of the worst crackdowns on dissent in the four-decade history of the Iranian regime, including an incident in November 2019 when authorities opened fire on crowds of protesters throughout the country, killing 1,500.

Next month’s ballot may not provide a place for any of the individuals whom Rouhani would prefer to succeed him, but this makes little difference in the lives of the Iranian people. It should also make little difference to Western policies for dealing with the Iranian regime. Although avowed hardliners like Ebrahim Raisi are prone to being more openly antagonistic of the regime’s foreign adversaries, their disputes with “reformists” are only a matter of tactics. The underlying goals and policies are invariably the same.

This was more or less proven recently by an interview with the regime’s Foreign Minister Javad Zarif which was leaked to Iranian state media. As that interview gained attention in the West, reports portrayed it as revealing serious disputes between the two factions, and as featuring Zarif’s harsh criticism of revered hardline figures like Qassem Soleimani, the commander of the terrorist Quds force, who was killed in a US drone strike early last year. But in reality, Zarif’s commentary acknowledged that figures like Soleimani have always been the true decision-makers in matters of Iranian foreign policy and that civilian leaders like himself have always supported that role.

In previous statements, Zarif has specifically stated that he met on a weekly basis with Soleimani and that the two men consistently found they had no serious disagreements over foreign policy or its underlying ideology. This is exactly what one would expect of a system in which every candidate for high office is vetted for loyalty to the supreme leader and the theocratic system that establishes his ultimate authority over all matters, both inside Iran and throughout the world.

Indeed, this broad ideological alignment is something that the Iranian people have come to recognize all too well, and that is why the regime’s Supreme Leader Khamenei and other high-ranking Iranian officials have used the run-up to next month’s elections in order to warn of the danger posed by a potential boycott of the electoral process.

Throughout its history, the Iranian regime has highlighted the proto-democratic elements of that process in order to make the argument for its own legitimacy. But with more and more frequency, Iranian citizens have rejected that narrative in favor of calls for a truly democratic system, built by leaders who are unconnected to the existing establishment. This goal has been made explicit by “Resistance Units” associated with the People’s Mojahedin Organization of Iran (PMOI/MEK), who have staged demonstrations and posted messages in recent weeks urging the people to sit out the presidential election in order to “vote for regime change.”

A similar boycott effort was wildly successful with regard to the parliamentary election in February 2020. Even according to the regime’s own invariably exaggerated statistics, turnout in that election was the lowest in the history of the Iranian regime. Now, state media outlets are warning that the turnout for the presidential election could be even lower. And some are going further by acknowledging that a successful boycott could set the stage for new anti-government uprisings like the one in November 2019, which saw Iranians from all walks of life condemning the hardline and reformist factions alike, and pointing to regime change as the only real solution to the country’s problems.