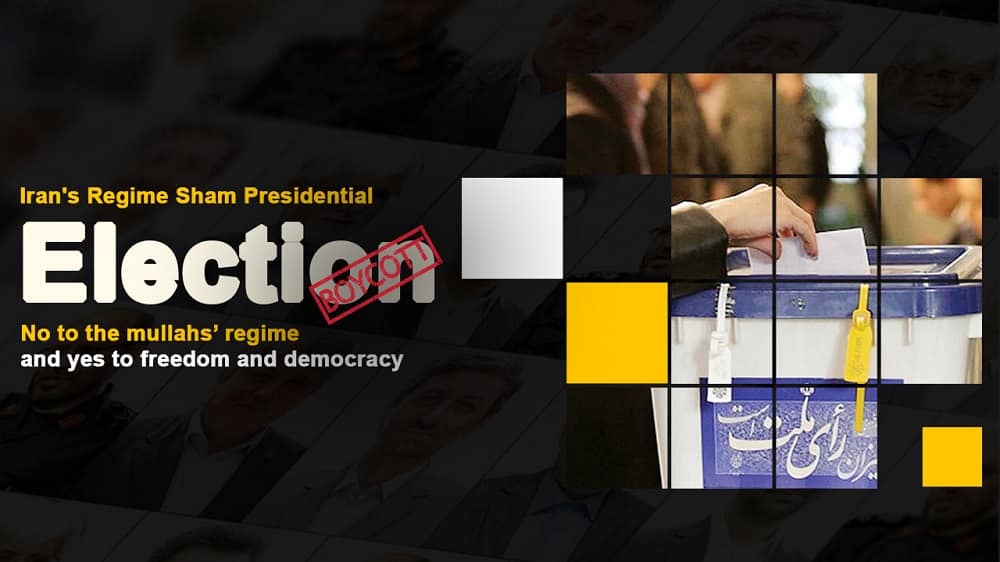 Iran’s Guardian Council disqualified many of the so-called candidates of the regime’s sham presidential election last week at the behest of the regime’s Supreme Leader Ali Khamenei. The massive purge of the candidates was part of the regime’s intention to consolidate power. All signs indicate Khamenei intends to pull Ebrahim Raisi out of the ballot box.

“People shouldn’t feel that someone else decides for them or elects someone on their behalf. This is a dangerous feeling,” wrote the state-run Setar-e Sobh daily on Monday.

Many believe that Khamenei’s intention to consolidate power will negatively affect his regime and expand the rift at the top, leading to major protests.

So why Khamenei took such a decision?

“The most important concern of the upcoming government is to prevent the emergence and happening of something very horrendous,” wrote the state-run Arman daily on Sunday, referring to Khamenei’s policy of consolidating power.

Khamenei faces a restive society. Three major Iran protests in 2018, 2019, and 2020, particularly in November 2019, rattled the regime’s foundation. The nightmare of the November uprising still haunts the regime.

All major Iran protests initially started due to economic crises. However, the regime has not resolved any of those crises. On the contrary, the regime’s corruption and malign policies have increased the economic crises, adding to the society’s restiveness.

“The economic crises have made people violent. This government may stay in power until July, but the effects of this violence last for years. Officials should answer people’s demands so they could live in comfort. If not, there will be social harms,” wrote the state-run Donya-e Eghtesad daily on Thursday in this regard.

While all the eliminated candidates were regime top officials involved in 40 years of crime since Khamenei could not accept the slightest opposition to his policies purged them all.

Khamenei chooses to consolidate power since he knows that the games of “moderation” and “reformism” will no longer work. During their major uprisings, Iranians chanted, “reformists, hardliner, the game is over.” Moreover, the campaign to boycott the regime’s sham presidential election, led by the People’s Mojahedin Organization of Iran (PMOI/MEK) Resistance Units, has intensified.  During May, over 310 areas in Iran’s provinces witnessed activities calling for a boycott of the regime’s sham presidential elections by the MEK’s Resistance Units.

People from all walks of life hold daily protests chanting, “we have heard too many lies; we will not vote anymore.”

Thus, Khamenei needs to unify his regime against what Arman described as “horrendous.”

“This horrendous issue that [Khamenei and his ilk] believe is coming will show itself in the future. They think that if they cannot prevent this terrible thing from happening, the [regime] will face serious challenges. This situation can be a kind of depiction of society, rivals, social actors, people, and historical conditions,” Arman daily wrote.

But the Khamenei’s decision to select Raisi will have severe consequences for the regime.

Since Raisi is sanctioned for human rights violations and has played an important role in the 1988 massacre of 30,000 political prisoners, the regime will experience more international isolation. Moreover, appointing a mass murderer as president ends the myth of moderation.

When Raisi comes to power, there will be more executions and oppression, which will add to the society’s explosiveness and the public’s hatred toward the regime.

Thus, it is safe to say that Khamenei is in a deadlock, and no matter what he does, his regime will not last long.

“The system should seriously warn and intimidate those violating people’s rights. If the situation becomes radicalized, it will damage the election. Days before the election, intimidation [by Khamenei’s faction] will have the opposite result,” Amran daily wrote, warning Khamenei and other officials.