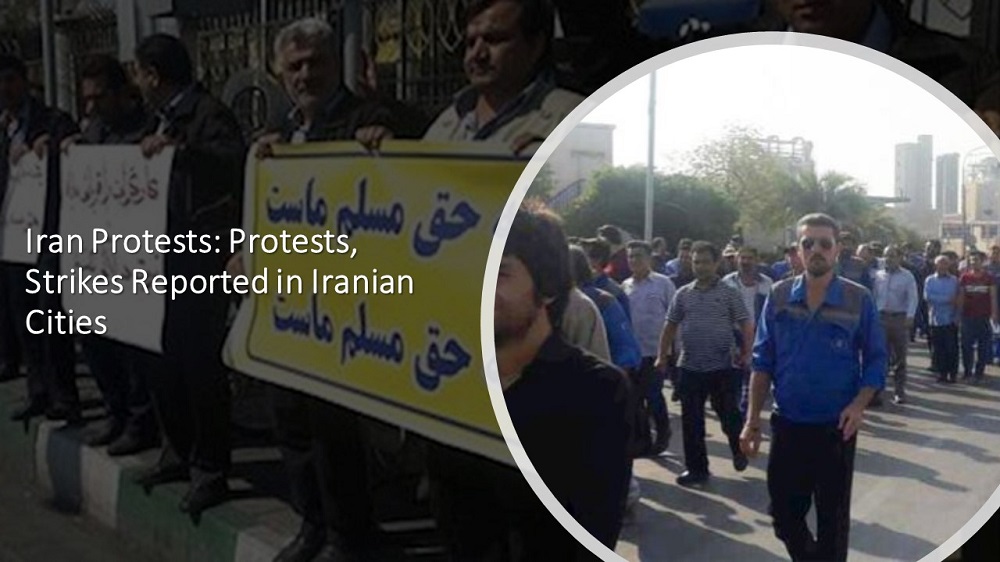 Iran: There are protests and strikes in Tehran and several other cities.

SOUTH-EAST PROVINCE OF ZAHEDAN: YOUTH IN CONFLICT WITH SUPPRESSIVE SECURITY FORCES IN TOWN.

On Wednesday, January 22nd, 2020, a group of young people were engaged in a conflict with the suppressive police station in Zahedan. The conflict began when the security forces tried to confiscate the motorcycle of a young man that was his only means of making money and providing for his family’s economic needs, MEK sources reported. The regime’s repressive agents tried to intimidate him by shooting; however, he did not give up, the sources reported.

In the photo on the left, an Iranian police officer shoots someone. In the video on the right, the demonstrators throw stones.

Iran: The MEK Resistance Units Represent the Nucleus of the Campaign to UNSEAT the Mullahs. Over the past year, the MEK expanded its “Resistance Units,” and they have been very active in all cities across Iran, in- forming and assisting the public on ways to resist the regime.

Iran Arrests Teenager for Tearing Down an Image of Qassem Soleimani.

Iran, January 22, 2020—Employees and workers of the Mahshahr Petrochemical Complex in southwest Iran launched a strike on Tuesday, January 21, in the so-called Bandar-e Khomeini (formerly known as Bandar-e Shahpour), protesting not receiving their wages and responses to their demands.

In Tehran, a group of creditors who had invested in the Caspian Credit Firm – linked to the regime’s IRGC – held a rally on Tuesday protesting the plundering of their assets. This gathering was held outside an administrative office of this extremely corrupt institution.

In Eslamabad Gharb, located in western Iran, railway workers held a rally on Tuesday, protesting not receiving their paychecks for the past five months and regime officials taking measures to halt their construction project in its entirety. This gathering was held outside the office of the local representative of Iranian regime Supreme Leader Ali Khamenei and the governor’s building.

Locals in the town of Kaki in Bushehr Province, southern Iran, held a gathering outside the so-called city council protesting the local water and fuel shortage crisis that has disrupted their everyday lives.

MARYAM RAJAVI: THE PEOPLE OF IRAN, THE RESISTANCE UNITS, AND REBELLIOUS YOUTH WILL CONTINUE TO END THE REGIME

Message to parliamentary conference in Britain advocating support for the Iran uprising, decisive policy on Iran.

In part of this message, Maryam Rajavi said: We are at a sensitive moment in the history of the people of Iran. The Iranian Resistance seeks to establish a republic based on people’s free choice and vote, separation of religion and state, pluralism, gender equality, and abolition of the death penalty. I urge you to be the voice of the people of Iran in both houses of the UK Parliament. Urge your government to adopt a decisive policy on Iran, and recognize the right of the Iranian people to resistance. Ask them to take urgent action to free those arrested, and take the lead in referring the dossier on the regime’s crimes to the Security Council to prosecute and punish the regime’s leaders.

UPRISING HAS SHAKEN REGIME TO ITS FOUNDATIONS

Thursday, January 23, 2020, marks the 70th day since the beginning of the nationwide Iran protests.

Read more: Iran Protests: Conference in the British Parliament in Support of the Iranian People’s Uprising

Previous articleIran Is Not a Safe Destination While the Mullahs Are in Power
Next articleLatest News on Iran-January 23rd, 2020