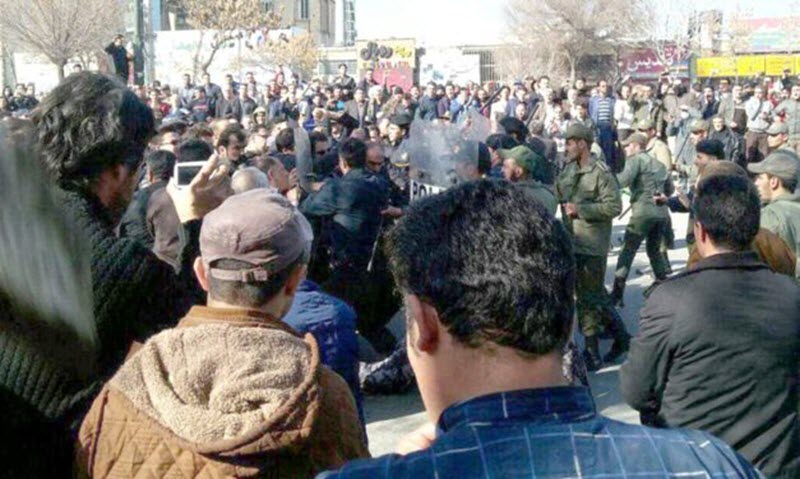 The five independent formations — Free Labor Union of Iran, Kermanshah Electrical and Metal Workers Labor Union, Alborz Province’s Painters Syndicate, Association of Defenders of Workers’ Rights, and the Committee Pursuing Formation of Labor Unions in Iran — have issued a joint statement, condemning regime’s killing of more than 20 protesters as well as arrest of close to 2000, including 100 students, in different cities across the country.

In their joint statement, the independent labor unions have referred to regime’s crackdown on protesters as “the rulers’ declaration of war against masses of people fed up with the country’s miserable situation.”

Pointing out that continuous scattered protests have now turned into nationwide roaring ones, the statement says “the more violent crackdown will only lead to more people taking to the streets and give more depth and scope to their protests.”

Emphasizing that all Iranian people –including workers, teachers, students, women and any other oppressed individual– have the right to hold and take part in street rallies, the five independent labor unions have declared that “they consider regime’s shooting at the protesters as a criminal act.”

“Those who after nearly 40 years from the 1979 revolution have done nothing but creating an atmosphere of fear, oppressing, embezzling, looting the country’s wealth, spreading poverty and misery and destroying the country’s economy are now responsible for pushing the ongoing protests towards violence”, the statement says.

Free Labor Union of Iran, Kermanshah Electrical and Metal Workers Labor Union, Alborz Province’s Painters Syndicate, Association of Defenders of Workers’ Rights, and the Committee Pursuing Formation of Labor Unions in Iran have announced that they share the same protests expressed by oppressed workers and people of Iran to bring about big, humane changes. The five independent unions have also warned over consequences of regime’s crackdown on protesters and the possibility of recurrence of such crimes like the one that took place in Kahrizak detention center in 2009.

The statement also calls on all prisons across the country to open their doors and release detained protesters and all those who have been jailed for months and years for seeking freedom and justice.

To address the recent protests across the country, the labor unions had also released a joint statement last week, calling on the regime to put an end to poverty and misery and its policy of intimidation, oppression and imprisonment.

Meanwhile, Syndicates of Tehran and Suburbs Bus Workers as well as the Workers of Haft-Tappeh Sugarcane Company also issued a joint statement to criticize the way the regime is dealing with protesters, saying that violent crackdown on protesters should not be the answer to fed-up people.

They also criticized past decades’ economic policies as the source of such problems like wages five times below poverty line, non-payment of overdue salaries, expanding privatization, lack of job security, and temporary and blank signed contracts.

While this year’s minimum monthly wage has been set to be 930,000 tomans, the minimum monthly expenses of working-class households is estimated to be two million 550 thousand tomans, according to head of regime’s Labor Unions Confederation ‘Gholamreza Abbasi’.

The two syndicates have stressed on the legitimacy of workers and teachers’ protests and strikes, pointing out that nonetheless they’ve only been responded by being beaten, fired, flogged and put behind bars.

The statement also points out that workers and teachers’ independent unions are not only derecognized by the regime, but they are violently dealt with and even regime’s own constitution recognizing people’s right to protest and form independent syndicates to pursue workers’ rights have continuously been violated as well.