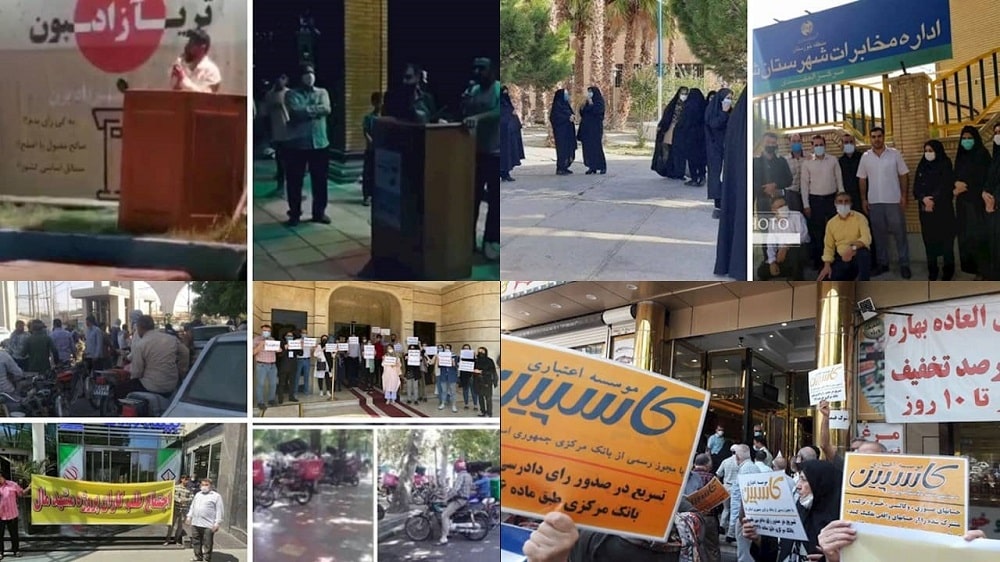 Reports from Iran indicate protests by people from all walks of life continue across Iran, days before the regime’s sham presidential election. These protests are due to Iran’s dire economic situation and the regime’s inaction.

On Wednesday, June 16, 2021, workers of the Thran Jonoob Construction Company in Mahshahr, southwest Iran, continued their strike and protested for the third consecutive day. They started their strike when the company fired many local workers.  It is worth noting that more than 70% of this company’s workers are not local and are relatives of the company officials.

On Wednesday, workers of Haft Tappeh Sugar Cane Company in southwest Iran held a protest. They have held several protests and strikes in the last few months. These workers demand their water irrigation right to irrigate sugar cane fields. They also demand officials to clarify the company’s situation following the dispossession of Omid Assadbeigi, the corrupted CEO Of the Company and relative of the regime’s officials. Assadbeigi became Haft Tappeh’s CEO as a part of the regime’s so-called “privatization plan.” The regime had to remove him from this post following years of protests and strikes by the Haft Tappeh workers.

On Wednesday, workers of the Mashhad Mall project gathered in front of the office building of Ayandeh Bank in Mashhad, demanding their unpaid wages from the Exxon Petroleum Company and the company’s failure to pay workers’ salaries on time.

On June 16, the plundered investors of the Caspian Credit Institution held a protest demanding their life savings plundered by the institution. Caspian Credit Institution is linked to the Revolutionary Guard (IRGC) and has plundered people’s life savings with the promise of returning people’s money with higher interest. As a result, there have many protests by defrauded investors in recent years.

On Tuesday, several snap food deliverers in Laleh Park in Tehran held a protest. They demanded an increase in the cost of travel and delivering foods to closer locations.

On June 15, Khuzestan telecommunications employees gathered in several cities in the province to protest the lack of job security. Despite more than 20 years of experience, the demonstrators said that the regime officials refuse to respect workers’ legal rights.

On Tuesday, families of Bafgh phosphate mine workers in Yazd province, central Iran, held a rally protesting the delayed wages of their husbands. One of the demonstrators said that the security guards at the mine regularly summon the workers and put them under pressure.

On Monday, pipe workers in Mahshahr, Khuzestan province, held a rally in front of the governor’s office. One hundred eight workers of the Mahshahr pipeline have been laid off due to the alleged financial problems of the employer. Farmers in Khuzestan province also joined this rally. The local officials have prevented farmers from summer planting and refused to give farmers their right to water irrigation.

In addition to protests by people from all walks of life, many people call for boycotting the regime’s sham presidential election in the so-called “Free Tribune” the regime holds on the street.

“Those officials who tell us say death to America have sent their children to the United States to study there. With whose many? These people’s money. Why you keep lying to us, Hassan Rouhani gave many promises to people but plundered the national wealth in 8 years. [Ebrahim] Raisi [the supreme leader’s preferred candidate] has been the judiciary chief for two years. What has he done? They are all the same,” an Iranian woman tells a mullah in Tehran.

“This Ebrahim Raisi who speaks of Baluchi people’s right, what did he do in his previous position. What [Abdolnasser] Hemmati did in the Central Bank. We would have the same situation for the next 42 years, as long as this regime is in power,” said a young man from Sistan and Baluchestan province.

“Participating in the elections is betraying the blood of 1500 victims of the November uprising and their grieving mothers who cannot stop to cry,” said an Iranian man in Kerman, referring to the martyrs of the major Iran protests in November 2019.

Ongoing protests in Iran and unprecedented calls for boycotting the regime’s election farce in bright daylight indicate society’s restiveness and people’s willingness to overthrow the regime.