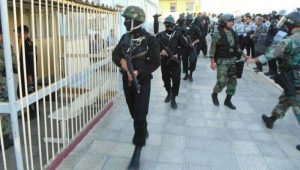 The Iranian regime appears to be in the midst of a new wave of politically motivated arrests and judicial summons. This happens regularly when the regime finds itself in the midst of crises that amplify the threat of public expressions of dissent. And right now, those crises are both numerous and severe.

The coronavirus pandemic is obviously one contributing factor in the clerical regime’s vulnerability. Iran’s outbreak is actually much worse than is generally acknowledged in international media. While Iran’s Health Ministry has released official statistics that place the overall death toll at around 12,000, independent reports suggest that that many people have died in the capital city of Tehran alone.

The National Council of Resistance of Iran has assembled a number of these independent reports in support of the conclusion that the actual nationwide death toll is more than 68,000. The NCRI’s latest reports indicate that Tehran has tacitly adopted a plan of herd immunity, and has no intention of reversing any of the steps taken over the past three months to reopen the country and put private citizens back to work in a high-risk environment.

Even before than plan went into motion, hardline voices in the regime were warning about the potential for the coronavirus outbreak to set the stage for new anti-regime uprisings. As early as March, the Asra think tank published a report that included this conclusion and urged the regime to take repressive measures in preparation for the public response to a mismanaged crisis.

That is exactly what the regime’s authorities appear to be doing now, as the families and friends of current political prisoners are targeted for arrest and questioning. The NCRI reports that multiple raids have recently taken place on these people’s homes, following upon harassment and intimidation that escalated in the wake of a media statement issued by one group of detained activists. The purpose of that harassment “was to break the prisoners and force them to express remorse and denounce the MEK and the Iranian resistance,” according to a June 28 statement from the NCRI’s Security and Counterterrorism Committee.

Arrest of #MEK Supporters Is Sign of #Iran Regime’s Fear of Organized Resistance
Reports from Iran indicate the #Iranian regime has started a new wave of arrest and issuing prison sentences for supporters of the MEK and other former political prisoners. https://t.co/L84UUA66Fr

The People’s Mojahedin Organization of Iran (PMOI/MEK) has been a major driving force behind some of the other crises confronting the clerical regime. Both before and during the coronavirus outbreak, MEK “resistance units” have been hard at work spreading a message of support for regime change and a democratic future for Iran. And over the past few years, that message has received unprecedented public endorsement, as evidenced by two nationwide protest movements that emerged under MEK leadership.

The first of these began in the final days of 2017 and continued through much of 2018. It was widely regarded as the most significant demonstration since the 2009 protests, and some even suggested that it eclipsed the earlier protest with bolder demands and a broader range of participation. While the 2009 protest was massively popular among the middle class youth of Tehran, the 2018 uprising included residents of an estimated 150 different localities, including both cities and rural towns that were once assumed to be strongholds of political support for the Iranian regime.

This latter fact is sufficient on its own to explain the anxiety on display in that regime’s recent behavior. And of course, that same anxiety was on display while the uprising was still ongoing, as dozens of participants were fatally shot by security forces or tortured to death after arrest. Thousands of others were subjected to long-term detention, and it remains unclear how many were handed criminal charges for their peaceful activism.

The same can be said with regard to Tehran’s response to a subsequent nationwide uprising, although it is known that at least eight people have been sentenced to death for their participation in protests that erupted spontaneously across some 200 localities in November 2019. More capital sentences may be yet to come, but most of the fatal consequences of that uprising were much more immediate. An estimated 1,500 people were killed in just a matter of days, mainly by the Islamic Revolutionary Guard Corps.

However, even this was not enough to suppress dissent for very long, and in January many Iranians were back out in the streets of multiple provinces, protesting the IRGC’s shoot-down of a commercial airliner and the regime’s subsequent effort to cover it up. This latest round of popular unrest was at the forefront of government officials’ minds when the coronavirus outbreak was officially acknowledged the following month. It no doubts influenced the Asra report and other hardline statements affirming the likelihood of more protests in the days to come.

The latest arrests should be recognized internationally as yet another sign of the regime’s commitment to suppressing dissent by any means necessary. But they should also be recognized as a sign of the regime’s vulnerability in the face of unresolved crises and organizing efforts by Iranian activists. In this sense, Western policymakers should also be contemplating the ways in which they might be able to coordinate with those activists in order to put additional pressure on the regime while holding Iranian security forces accountable for human rights abuses and suppression of free speech.

Many policymakers, supporters of the MEK and the NCRI will be invited to consider this very question on July 17, when the Iranian Resistance holds its Free Iran Global Summit. The event will comprise multiple gatherings on five continents, linked together by a live video stream that will be made available to additional policymakers and journalists. In it, speakers such as the President-elect of NCRI Maryam Rajavi will emphasize that Tehran’s backlash is only a sign of the recent and ongoing advances made by pro-democracy activists.

Those activists will surely face more obstacles on their way toward ultimate triumph, but the international community can help to remove some of those obstacles by holding the Iranian regime to account for its past abuses, and making it clear that more of the same will not be tolerated.

Previous article
Iran’s Coronavirus Outbreak Is Worsening Much More Rapidly Than Regime Will Admit
Next article
Iran: Germany Federal Office for the Protection of the Constitution 2019 Highlights Iran Regime’s Terrorist Attempts Against MEK