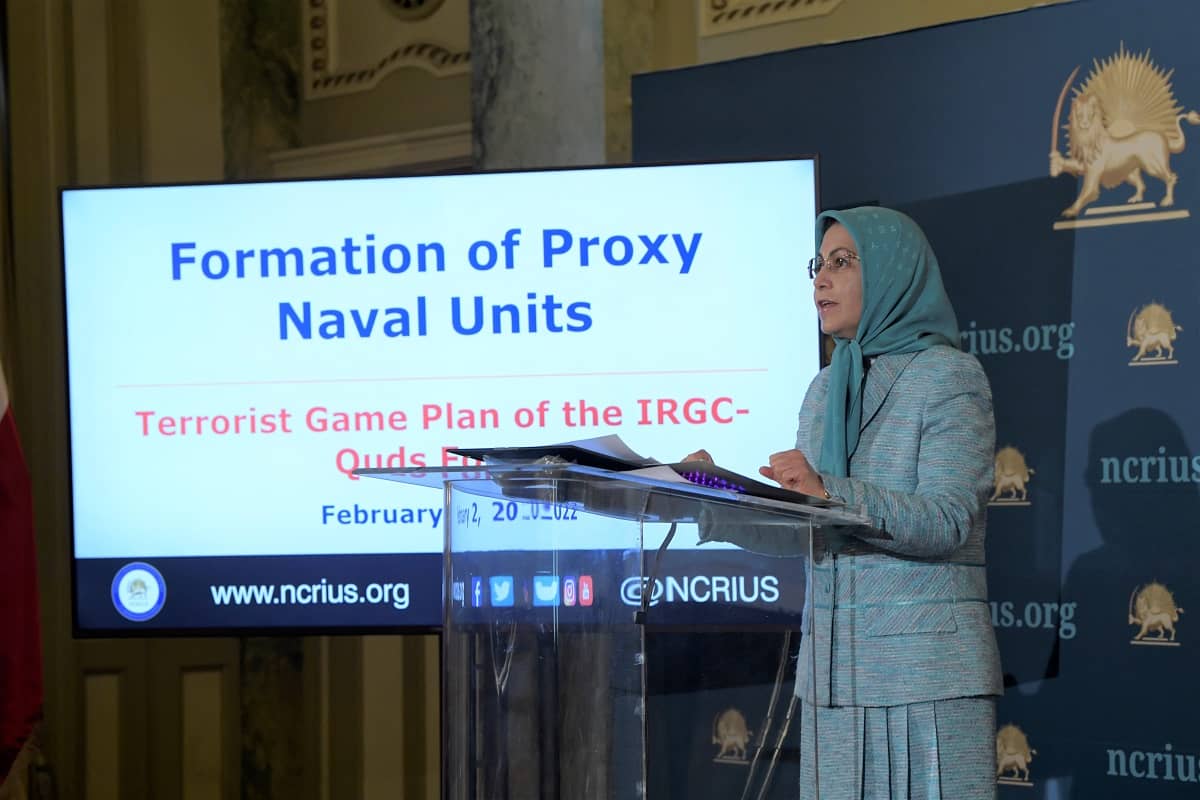 On February 2, through its Washington Office, the National Council of Resistance of Iran (NCRI) made public its latest revelations about the Iranian regime’s newest strategy and terrorist arm, the Revolutionary Guards Quds Force Naval Unit, and provided details about its mission, its bases and the best way to confront it.

According to information received from the network inside Iran of the main Iranian opposition, the People’s Mojahedin Organization of Iran (PMOI/MEK), the Quds Force has been recruiting mercenaries for newly created, armed, and trained terrorist units to attack ships and maritime targets in the region. The IRGC-QF conducts training in specialized naval courses in Iran for its Yemeni, Iraqi, Syrian, Lebanese, and African mercenaries and dispatches them to their home countries to form naval units. 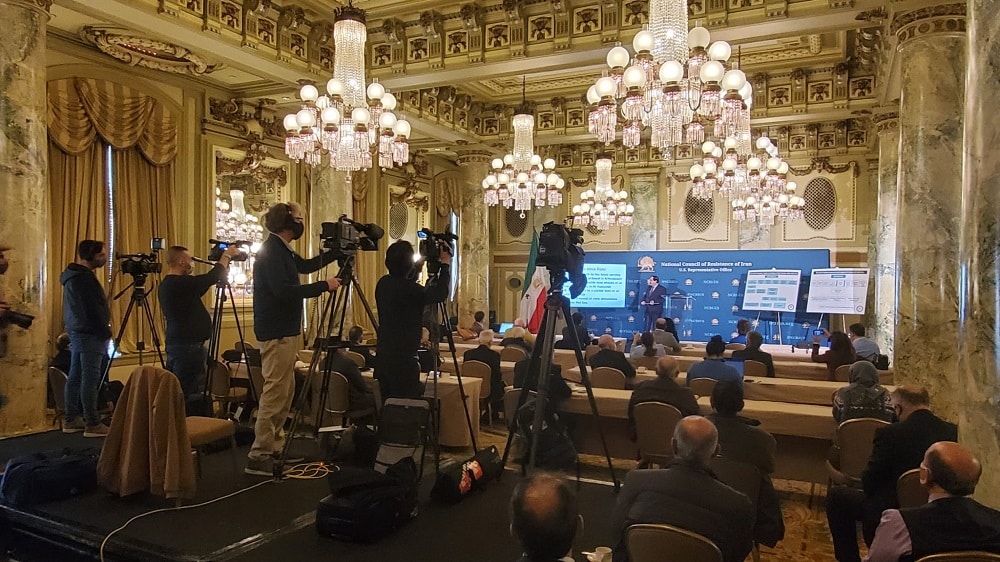 For the first time, the NCRI-US office laid down details of the IRGC-QF’s formation of terrorist naval units, including the cycle of recruitment and training for terrorist operations by proxy forces, as well as the cycle of sending weapons and other logistical support to them.

The IRGC has more recently formed the Quds Force Naval Unit in the context of the expansion of its terrorist activities by proxy forces in Iraq, Yemen, Syria, Palestine, Lebanon, and several African countries. This Unit provides specialized (commando) training and forms operational units to conduct naval warfare.

Since early 2021, and more so since August 2021, when Ebrahim Raisi took office as the new president of the Iranian regime, Tehran has stepped up its maritime terrorist operations using its foreign mercenaries, especially the Houthis of Yemen.

After the elimination of the Quds Force Qassem Soleimani in January 2020, a major blow to the Quds Force’s ability to directly encroach in the countries of the region, the IRGC’s capacity to intrude in Iraq, Lebanon, and Syria have been on the decline. To compensate for this blow, the IRGC has turned to intervention in Yemen, especially escalating naval terrorist activities and threatening the international shipping on its shores.

The naval terrorist operations in the Red Sea and the Strait of Bab al-Mandab are supervised by the command center of the IRGC-QF but carried out by naval units established with Houthi forces.

National Council of Resistance of Iran – US https://t.co/5gyq01wUzt

The briefing also included information about how the Quds Force Naval Unit’s trained troops are organized in naval commando battalions, which are specifically deployed in the Arabian Sea, Bab al-Mandab, and the Red Sea to disrupt maritime navigation of commercial ships, to attack ports, conduct ship hijackings, and plant mines, among other things.

The Quds force has set up a smuggling network to provide weapons and equipment to its proxies for naval attacks, using various routes and methods from Yemen to Somalia.

The Quds Force has equipped the Houthis with speedboats, missiles, mines, and other weapons. It employs tactics that utilize speedboats and asymmetric warfare — similar to those used by the IRGC’s Navy in the Persian Gulf — to expand conflicts into the Arabian Sea, Bab al-Mandab, and the Red Sea. 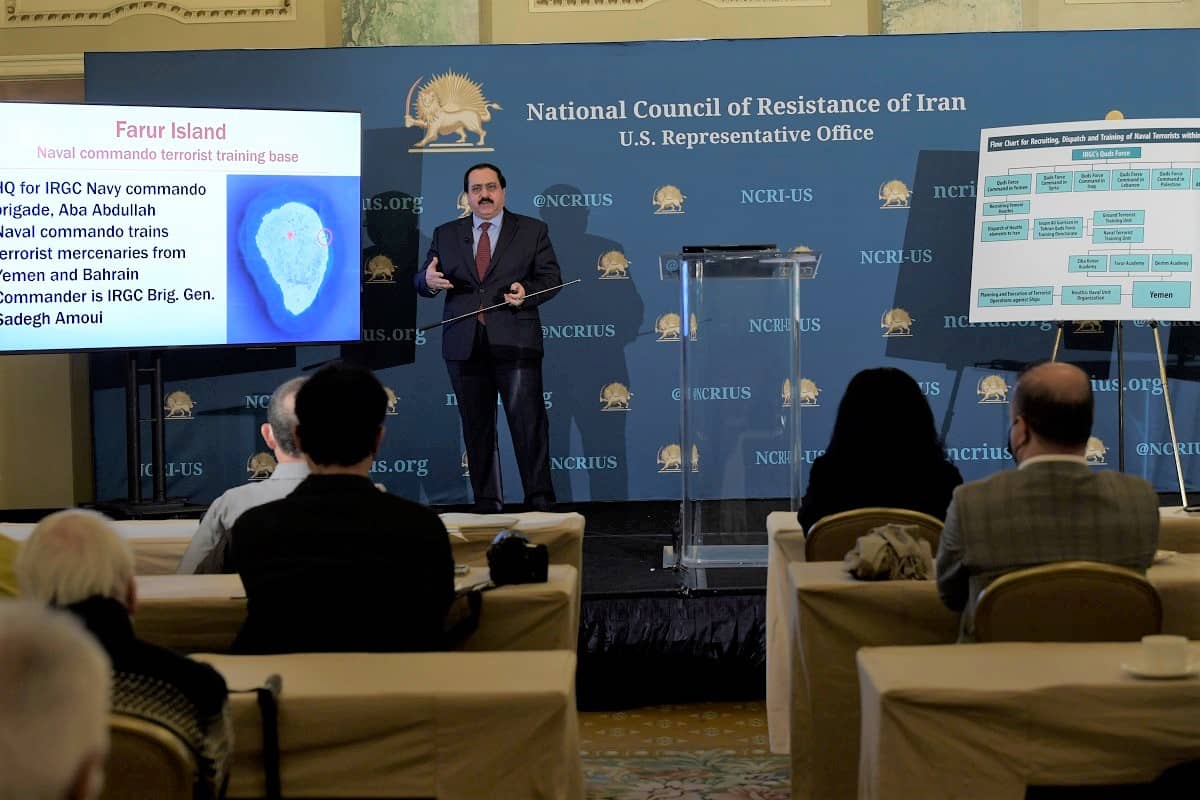 The continued offers of concessions by Western countries and lack of accountability for the Iranian regime’s terrorist operations and its killings at home, have emboldened Tehran to step up its defiant behavior, creating mayhem in the region, the NCRI’s U.S. Representative Soona Samsami underscored.

Since December 2017, there have been eight major uprisings, as well as successive protests by various sectors of Iranian society demanding fundamental change. Tehran’s latest game plan to create terrorist naval units and step up its regional mayhem is intended to project power and cover its fundamental weakness inside Iran. The regime hopes that this image will provide additional leverage internationally and domestically.

Samsami added that regardless of what the Iranian regime might do with its nuclear weapons program and its negotiations with the P5+1, Tehran must be held accountable for its proxy wars in the region, its terrorism, its development of ballistic missiles, and its egregious violations of human rights and suppression of its own citizens engaged in ongoing uprisings.

Deteriorating economics have deprived the IRGC and Tehran’s proxy groups of the necessary life support they need, and the regime desperately demands sanction relief to fund its oppressive forces in and outside Iran. With the latest military setbacks in Yemen’s Marib Region, the regime’s domination throughout the Middle East is ailing severely. The nationwide upheaval has rendered IRGC’s ranks and morale thin and the world needs to closely watch at what’s happening on the streets in Tehran, Beirut, and Baghdad to learn firmness and follow suit.