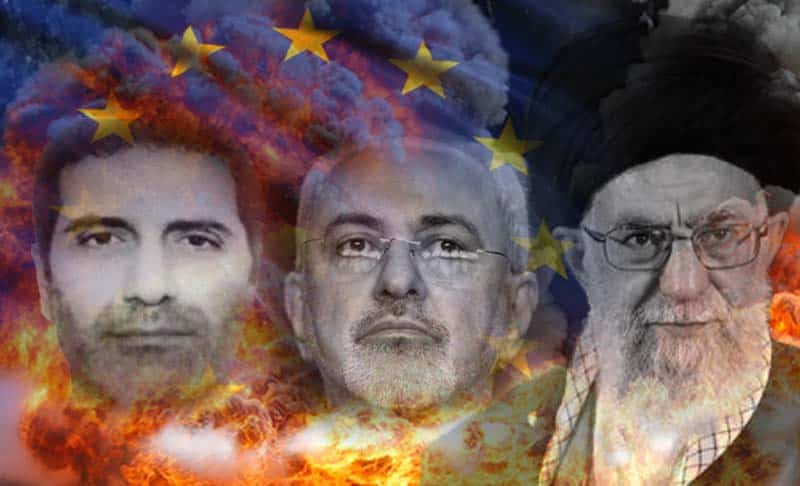 On February 4, a court in Belgium convicted Iran’s incarcerated diplomat-terrorist Assadollah Assadi to 20 years in prison on charges of terrorism. Having received a major political blow, the regime’s officials and state-run media desperately call for “retaliation,” confirming once again mullahs’ state-sponsored terrorism.

“The Europeans are politicizing the diplomat’s case. If diplomats have immunity and, unfortunately, someone who has immunity is said to have immunity in Austria but not in Belgium, he is tried in absentia,” wrote state-run Mizan news agency, an outlet affiliated with the regime’s Judiciary.

Assadi used his diplomatic passport to transfer 500 grams of explosives using a commercial flight to Austria, where he has stationed as the third secretary of Iran’s embassy. He handed the explosives over to a Belgian-Iranian couple in Luxembourg. He tasked them with bombing the “Free Iran” gathering of the National Council of Resistance of Iran (NCRI) in Paris on June 30, 2018.

During Assadi’s trial in November and December 2020, the prosecutors underlined that since Assadi was arrested in Germany, Austria, where Assadi’s diplomatic mission is located, he can’t object to his arrest was arrested outside of Austria. According to international law, he did not have diplomatic immunity.

The evidence found in Assadi’s car showed he was using his diplomatic privileges to run the Iranian regime’s network of terrorism and espionage across Europe.

Based on the evidence and the chain of events, the Belgian prosecutors concluded that the 2018 foiled bombing was not Assadi’s personal initiative and was an act of state-sponsored terrorism. Assadi’s conviction and the regime’s efforts to have him released confirmed the truth that the entire regime was behind this crime.

Underlining the regime’ failure in releasing Assadi, what should the regime do, Mizan wrote: “Generally in Iran, this should be done through retaliation, which is one of the pillars of the international community and an international custom as the [regime] did in the case of South Korea’s debt. After [South Korea] refused our demand to pay its debt, we stoped the Korean ship under the pretext of polluting the Persian Gulf and the environment.”

Mizan’s article once again confirms Iran’s state-sponsored terrorism. These remarks are not surprising from an outlet close to the regime’s Judiciary, headed by Ebrahim Raisi (aka hanging judge), one of the main perpetrators of the 1988 massacre of over 30,000 political prisoners.

Due to the Iranian regime’s 40 years of state-sponsored terrorism, Assadi’s conviction and his case, although very important, is not shocking.

The surprising and rather appalling fact is that European leaders continue having a dialogue with the regime.

Assadi was working on the regime’s senior officials’ orders and was mainly under the command of Foreign Minister Mohammad Javad Zarif, who provided him with diplomatic means to carry out the 2018 foiled bombing.

On February 4, when Assadi was convicted, the European Union sent a weak message to the regime when its head of External Actions, Josep Borrell, underlined the EU’s intention of continuing the so-called “maximum diplomacy” strategy with the terrorist regime in Tehran.

This shameful policy has been once again confirmed since an online “Europe-Iran Business Forum” will be held on March 1-3. This event was canceled in December at the very last moment due to Ruhollah Zam’s execution, a French resident.

After Assadi’s conviction, and while the United Nations condemned the regime for the 67th time for human rights abuses, what message will Mr. Borrell and the EU’s “maximum diplomacy” strategy send to Iran?

Holding this business forum or continuing any relations with the Iranian regime is like giving it the green light to further spread terrorism and continue abusing human rights violations. Assadi’s case and conviction show the regime’s malign activities are not limited to Iran’s borders.

The European Union should make all relations with the regime contingent on its absolute halt of terrorism and human rights violations. Holding the regime to account is the only way to end its malign activities.

Previous articleEU Must Recognize the Iranian People, and Not the Iranian Regime as Allies
Next articleIran: Coronavirus Fatalities in 480 Cities Exceed 216,200