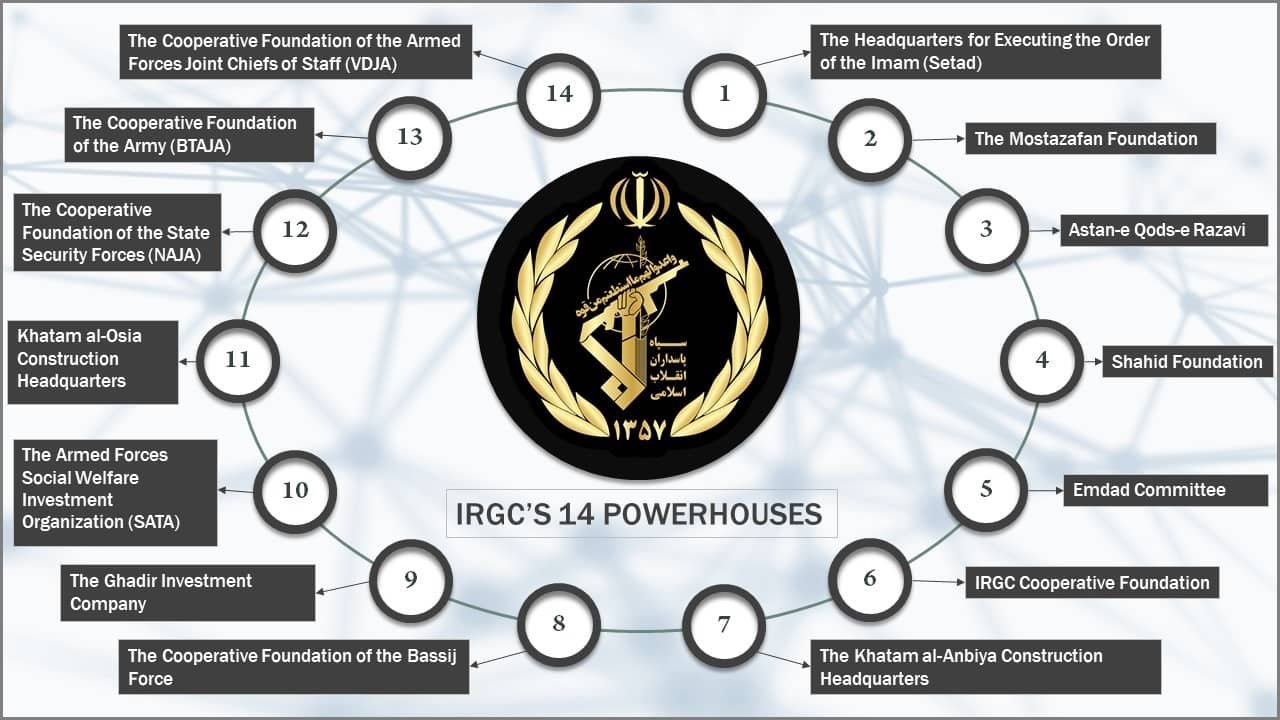 Iran has been going through its worst economic situation in the last century. The new administration of Ebrahim Raisi has been promising to resolve Iran’s economic crises. The question is whether this government, handpicked by the regime’s Supreme Leader Ali Khamenei, is able to solve Iran’s complex intertwined problems or not?

“An issue that has very much worried people is the expansion of monopolies within our country’s economy which is evident in Raisi’s government,” the state-run Jahan-e Sanat wrote on October 19, hinting at increasing corruption. “In other words, instead of making our economic environment more competitive, we are witnessing the rise of monopolies, which has greatly worried economic actors about their future,” the daily added.

Iran’s economy has long been monopolized by Khamenei and the Revolutionary Guards (IRGC). But, Raisi’s administration is full of IRGC commanders and Khamenei’s inner circle men whose main task is to plunder Iran’s national wealth and prolong the regime’s life.

When Raisi nominated his cabinet, Mrs. Maryam  Rajavi, the Iranian opposition’s president-elect, described it as “the embodiment of four decades of the religious and terrorist dictatorship of the mullahs, whose mission is to counter popular uprisings, plunder national wealth and resources, step up terrorism and warmongering, and expand the unpatriotic nuclear and missiles projects.”

The background of Raisi and his ministers is a testament to the fact that as it comes to Iran’s economy, the real task of these thugs is to plunder people.

Raisi’s Vice-President is Mohammad Mokhber. He is a relative of Khamenei and was the head of Execution of Imam Khomeini’s Order (EIKO). The organization also called ‘Setad Ejraiye Farmane Hazrate Emam’ or ‘Setad‘ has been a huge conglomerate and cartel for plunder since July 2007. Previously, he was the Deputy Director of Commerce and Transportation for the Mostazafan Foundation, another huge conglomerate.

On June 17, 2013, Sadegh Amoli Larijani, the regime’s Judiciary Chief at the time, issued an order based on Khomeini’s ruling, in which he named EIKO as “the only authorized body do deal with the Supreme Leader’s properties,” and ordered all courts in the country to “investigate the undeclared properties (confiscated properties)… which have not yet been identified, registered and possessed, and issue supplementary rulings in favor of EIKO.”

Raisi himself was the caretaker of Astan-e Quds Razavi, one of Iran’s most longstanding financial and religious foundations.

In September 2019, Behzad Nabavi, a former government minister who served in different administrations, underlined that in Iran, “there are four institutions that control 60 percent of the national wealth. This includes Executive Headquarters of Imam’s Directive (Setad), Khatam-ol-Anbiya Base, Astan-e Quds, and Foundation of the Oppressed and Disabled.”

“None of these institutions are in connection with the government and parliament,” he added.

Khamenei has also handpicked the regime’s parliament and put one of his closest officials and a corrupted element, Mohammad Bagher Ghalibaf, as the parliament’s speaker. As the mayor of Tehran, Ghalibaf is accused of stealing over billions of dollars.

According to Majid Farahani, head of Tehran’s municipality budget committee and based on reports submitted by the auditor in 2016, municipal expenses were 196.72 trillion rials, while in the mayor’s reports, the expenses are indicated 198.58 trillion rials. “There is a 10-trillion-rial contradiction between the reports, and the question is, why?” Farahani said, according to the semi-official ISNA news agency on January 15, 2018.  Alireza Zakani, another IRGC commander, succeeded Ghalibaf

Ghalibaf has also been one of the top IRGC commanders. Ghalibaf was succeeded by Alireza Zakani, another IRGC commander and a figure close to Khamenei. IRGC has long been plundering the national wealth through its front companies and headquarters. One of IRGC’s top corrupt organizations is Khatam al-Anbiya Headquarters.

“Our effort is to complete the semi-finished projects and provide the necessary funding. Considering the capacity of Khatam al-Anbiya HQ in implementing projects and mega projects, Tehran Municipality has a great desire to hand over these projects to Khatam HQ,” said Mehdi Chamran, head of Tehran’s City Council on October 3.

Khatam al-Anbiya Construction Headquarters began as a contractor of industrial and construction projects in 1989. In its charter, the most important goal of the complex is to “efficiently utilize the available construction and economic resources, capacities and talents of the IRGC to continue the Islamic Revolution.”

The Khatam Headquarters contracting services acts as a huge intermediary between the government and small engineering and technical companies, which have a major portion of their revenues seized by Khatam. Ownership of many of these companies occurred unilaterally or through intimidation and force. Khatam also has extensive operations in the sectors of oil and gas and petrochemicals. For instance, it is responsible for the Phase 15 and 16 development of the South Pars oil and gas field.

In 2015, the official IRNA news agency quoted the National Iranian Oil Company director as saying that the Khatam Headquarters’ oil contracts had surpassed $25B.

It is worth noting that Raisi’s current Minister of Urban and Road Development, Rostam Ghasemi, was Khatam al-Anbiya’s commander from 2007 to 2011. From August 2011 to 2013, he was Minister of Oil under then-President Mahmoud Ahmadinejad.

During his tenure, astronomical financial irregularities, embezzlement, kickbacks, bribery, and other financial crimes happened, including the purchase of 30 oil rigs without “procurement tender formalities,” other violations in the purchase of another 25 oil rigs as well as the “disappearance” of a number of oil rigs.

These facts highlight once again that Ebrahim Raisi and his ilk are not going to solve Iran’s economic problems. Iran’s state media also confirmed the latter on Tuesday.

“Three months after the inauguration of Raisi, Iran’s economy has not changed. In some cases, the situation seems even more dangerous,” wrote the state-run Hamdeli daily on October 19. One of these dangerous problems is the rising inflation rate which directly affects people’s lives.

“The latest situation of macroeconomic indicators shows that the 12-month inflation leading up to September has reached nearly 60 percent, and food and beverage inflation has reached more than 73 percent. The increasing inflation is unprecedented in four decades after the Islamic Revolution. The result of such complicated conditions is the shrinking of the people’s table and the dire living conditions of the poor and the middle class,” wrote the state-run Farhikhtegan daily.

The ongoing economic crises in Iran have turned society into a powder keg. There are daily protests in Iran by people from all walks of life. They have realized that Raisi’s hollow promises are part of the regime’s deceptive measures to postpone another major uprising. The regime’s ongoing corruption and its devastating effects on people’s lives have indeed created a danger towards the regime.

“We should find a way to control the flood of [anger] which could ruin [the entire system]. Never has the situation been this dangerous. We are in difficult economic circumstances. If this situation couples with people’s demands and real economic factors, we would be down on a dangerous path,” the state-run Hamdeli daily warned officials on Monday.