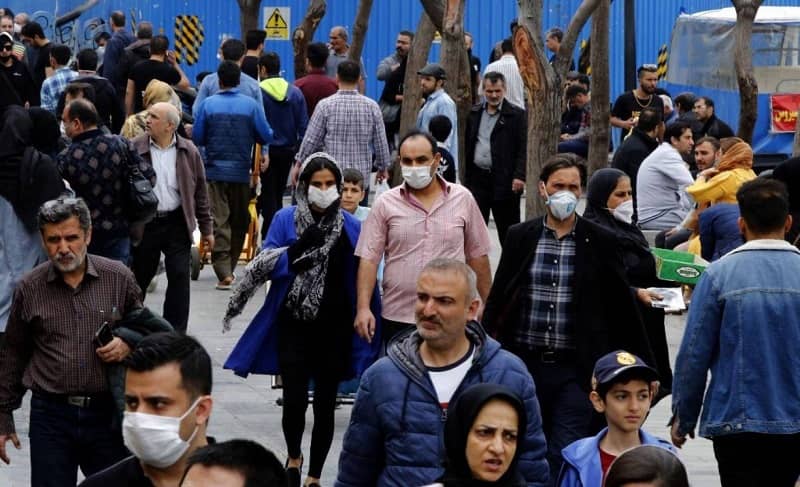 The Persian Year of 1399 ended on Saturday. Iranians suffered from various economic and social problems due to the regime’s wrong policies. The regime also received major blows and now faces a restive society.

The Iranian people grappled with poverty throughout the last year. Over 80% of Iran’s 84 million population fell below the poverty line. The Iranian people’s economic hardships doubled due to the Covid-19 outbreak and the regime’s refusal to help them.

“More than 70% of workers are underemployed and can no longer afford to buy red meat or even white meat and have been forced to remove these items from their monthly shopping cart,” wrote the semi-official ILNA news agency on November 16.

“It is the most despicable lie to say that 40% of inflation belongs to sanctions. In the last ten months, $30 billion and another $15 million vanished in the banking network,” said Said Lilaz, an official close to Rouhani’s faction. (ILNA, November 28, 2020)

“People’s income has reached its lowest point due to the Covid-19 outbreak and the economic events. People are going through difficult conditions. Economic pressures such as rampant inflation, declining incomes, declining purchasing power and rising poverty on the one hand, and the costs of coronavirus outbreaks on the other, have created many challenges for them,” wrote the state-run Sobh-e Emrooz daily on March 14.

“This inefficient state of the country’s economic management must end. From 2014 to this year, people’s purchasing power has fallen sharply. An important part of the problems now is not the sanctions but the weakness of management. Inadvertently, [the government’s officials] have drastically devalued the currency against foreign currencies. You can also see the status of the stock market. [President Hassan Rouhani] claims that both the centrifuges and the economy are running. Such words are strange and disappointing in this situation,” the state-run Fars news agency reported on March 6, 2021, quoting Mohsen Rezaei, secretary of the regime’s Expediency Discernment Council.

“Inflation has now reached a point where some people cannot afford to buy a whole loaf of bread and leave their national identity card as a security deposit to get a loaf of bread. In such a situation, chicken and eggs are considered a luxury item,” wrote the state-run Resalat daily on March 2, 2021.

“[Official] estimates indicate 7 to 9 million tomans as the rate of the living basket. But years of experience has shown that finally, these numbers stay on paper, and the final salary [of worker] has a long-distance with reality,” wrote the state-run Hamdeli daily on January 31.

“The food price index in the first eight months of 2019 grew by about 22.5 percent. Meanwhile, in the same period in 2020, the food price index has grown by 47%. The increase in the food index and the price permit in 2020 has caused the poverty line and society’s poverty rate to increase. The data also shows that the amount of calories consumed by each Iranian has been steadily declining since 2011,” wrote the state-run Mardom Salari daily on January 9, 20201, based on the Parliamentary Research Center’s report.

The economic hardships have turned the society into the powder keg, and Iranians, mainly the youth, are yearning for regime change.

Unlike other governments, the Iranian regime embraced Covid-19 and, by starting a systematic cover-up and inaction, tried to use the mass casualties as a barrier to another uprising. According to the state-run Arman, the Persian year of 1399 started with the Covid-19 outbreak and “ended with Iran being conquered by the coronavirus,” the state-run Arman daily on March 18.

Fearing another nationwide protest, even larger than the November 2019 uprising, encompass the country, the Iranian regime embraced the entry of this heinous virus.

“[the authorities] left hungry and depressed people alone in a room with a lion and waited for the work to be done. Meanwhile, without attracting any attention to the skyrocketing prices, some courts were held as though they were held in a normal situation; each session could have created a fuss, abandoning the country’s forests to burn in fire and issuing death sentences for the detainees of the November incident,” wrote the state-run Mostaghel daily in July 2020.

The state-run media have many times acknowledged that mullahs had used Covid-19 to quell the society.

“In recent months, officials have announced various statistics on the Covid-19 death toll, which has confused the people. On the other hand, the government has been reluctant to use scientific methods and vaccinations and has caused more concern among the people. Involving people in the problems caused by the Covid-19 pandemic, such as [grappling with] the disease and the economic pressures of the business downturn, deprives them of the power and incentive to pay attention to the way public affairs are run. It allows the [regime] to move toward its goals, ignoring the public interest,” wrote the state-run Jahan-e Sanat daily in an article titled “are politicians interested in Covid-19 pandemic?” on March 15.

The regime’s Supreme Leader Khamenei banned the entry of vaccines on January 8, further confirming the regime’s intention of murdering people. Khamenei had described this deadly virus as a test and blessing in March 2020.

Yet, the ongoing protests in Iran show that society is no longer able to endure both the Covid-19 and economic pressures. “Although the coronavirus crisis delays the conflict, delaying it at the cost of overwhelming issues is a challenge in society. In other words, when society is freed from the clutches of this disease, political, social, and economic faults will begin to move with greater destructive power,” Jahan-e Sanat wrote, warning the regime of the upcoming uprising.

The Iranian regime had high hopes that with the new administration in Power in the United States, the golden era of appeasement could return. While continuing to reduce its commitments under the terms of the Iran 2015 nuclear deal with world powers, the regime hoped the new administration would succumb to the mullahs’ demands.

In December 2020, the regime’s Parliament passed a bill obliging the government to completely violate its commitments under the terms of the Joint Comprehensive Plan of Action (JCPOA) by February, unless the U.S. lifts all sanctions on the regime. The regime’s action provoked a strong reaction from three European countries, which issued a joint statement strongly warning the regime. Thus, the regime extended this so-called deadline for another three months in a humiliating retreat on the eve of the deadline. This move showed the regime’s nuclear extortion campaign comes from weakness.

Parallel to its nuclear extortion, the Iranian regime targeted several U.S. bases in Iraq, using its terrorist proxy groups, to further put pressure on the U.S. government. Instead of incentive packages, the U.S. responded with a heavy airstrike against the regime’s forces in Syria, killing and injuring dozens. This action was applauded by both political parties in the U.S. and the U.S. European allies.

The truth is that the regime’s extortion tactics contradicted the new political balance of power. The regime’s blackmailing campaign turned a firm Iran policy into a common interest of both political parties in the U.S. amid all the domestic issues in the U.S.

“Every week, there has been a [anti-regime] plan in the 56 days of the Biden administration.  Less than two months into the Democratic administration in the United States, eight anti-regime plans have been adopted in the U.S. Congress. Democrats, along with Republicans, have backed these plans,” wrote the state-run Javan daily on March 17.

Meanwhile, the Iranian Resistance, particularly the ten-points plan for a free Iran, presented by the opposition president Mrs. Maryam Rajavi received bi-partisan support in the U.S.

For instance, House Resolution 118, supporting a democratic Iran and Mrs. Rajavi’s ten-points plan, has so-far gave 168 co-sponsors from both political parties in the U.S.

Also, in Iran, youth are being attracted and joining the Iranian Resistance, mainly the People’s Mojahedin Organization of Iran (PMOI/MEK), due to its democratic values.

The social and economic problems have turned the society into a powder keg, on the verge of explosion. The state-run media have been warning that the MEK could lead this restive society toward a free Iran. This perspective becomes stronger daily.

“The rival faction should consider how we could control the rising danger of the [MEK Resistance] Units? Do they not see how the MEK is trying to recruit members from the ranks of the unemployed youth and the masses of boys and girls lost in poverty and turn each of them into an insurgent and a time bomb? Why don’t they see that in the context of the livelihood crisis, a dangerous and sinister organization is taking root under the skin of the city? Do they not know that the MEK in its networks incites the poor youth to take radical actions against the entire system? When the waves of the discontent move and quickly turn out of expectation into a violent storm, there will be no sign [of the regime],” wrote the state-run Mardom Salari daily on March 9, 2021.

Previous articleIran: Economic Crisis and Its Outlook in New Persian Year 1400
Next articleIranian Threat Against US General Is Latest Sign of Regime’s Desperation, Vulnerability