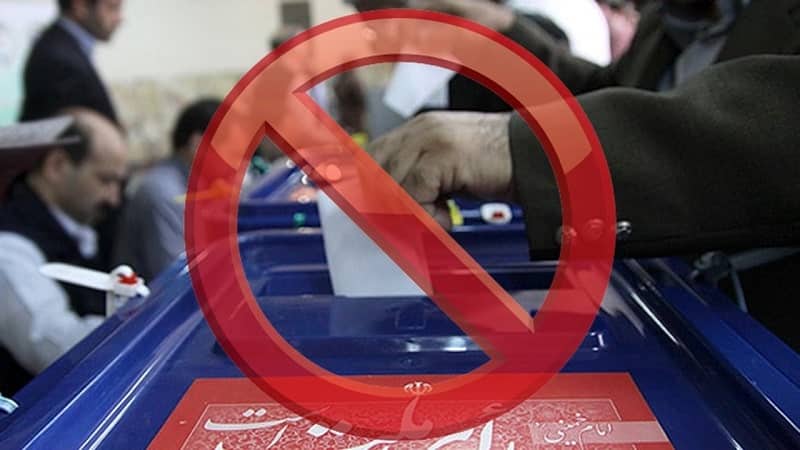 On Tuesday, in an interview with the semi-official ILNA news agency, Mahmoud Sadeghi, a former member of the regime’s Parliament, said, “Statistics on people’s turnout in elections are worrying; people’s most important question is, what is the use of participating in elections…last year’s election, we had the lowest turnout.”

He also said: “In recent weeks, Mr. Rahmani Fazli addressed a gathering of parties at the Ministry of Interior, saying that there are worrying signs that not only there is no desire to increase public participation, but polls and estimates indicate that comparing to last year, there is a decrease in public desire to participate in the election.”

Sadeghi also warned the regime’s officials that “it is worrying to see how we could make people hopeful,” or in other words, deceive them with bogus claims of “moderation.” This is not a solution to the current crisis, as people repeatedly chanted during their nationwide uprising, “reformists, hardliners, the game is over.”

The Iranian regime intends to have a large turnout to legitimize its rule, mainly after its bloody crackdown of the November 2019 uprising and killing over 1500 protesters.

Ali Rabie, the government spokesman, went further and said, “Elections are the key to the country’s foreign and domestic affairs. Unfortunately, some people think that they will benefit from low turnouts in elections. This is a misconception, and as an analyst, I would say that if we have low turnout in elections, the next government with little social capital will never be able to solve problems,” The official IRNA news agency quoted Rabie on Sunday.

Parvaneh Salahshouri another former MP said, “Given the living conditions and life hardships for different sections of society, it seems that the level of participation in elections will be low. Politicians want to say “this” should happen no matter what, but seemingly, there is no motivation for people to participate. What can happen in these few months when people are hoping to participate in the elections?” Salahshouri said in an interview with the state-run Dideban-e Iran on March 7, 2021.

These officials, mainly from the so-called “reformist” faction, are warning the rival faction of a low turnout, as they know that they no longer could deceive people with bogus claims of reformism. With the growing public hatred toward the regime, more people, especially youth, are being attracted to Iran’s main opposition group, the People’s Mojahedin Organization of Iran (PMOI/MEK).

The so-called reformists warn the regime’s officials of the MEK’s role in the society and possible uprisings, as the regime’s Supreme Leader, Ali Khamenei, has made it clear that he wants to make his regime unipolar by eliminating all candidates of the rival faction during the sham parliamentary elections in February 2020.

“The rival faction should consider how we could control the rising danger of the [MEK Resistance] Units? Do they not see how the MEK is trying to recruit members from the ranks of the unemployed youth and the masses of boys and girls lost in poverty and turn each of them into an insurgent and a time bomb?” wrote the state-run Mardom Salari daily March 8, 2021.

Previous articleLongstanding Lack of Transparency Shows Iran Was Never Committed To Nuclear Deal
Next articleProtests in Northeast Iran: A Sign of Society’s Restiveness