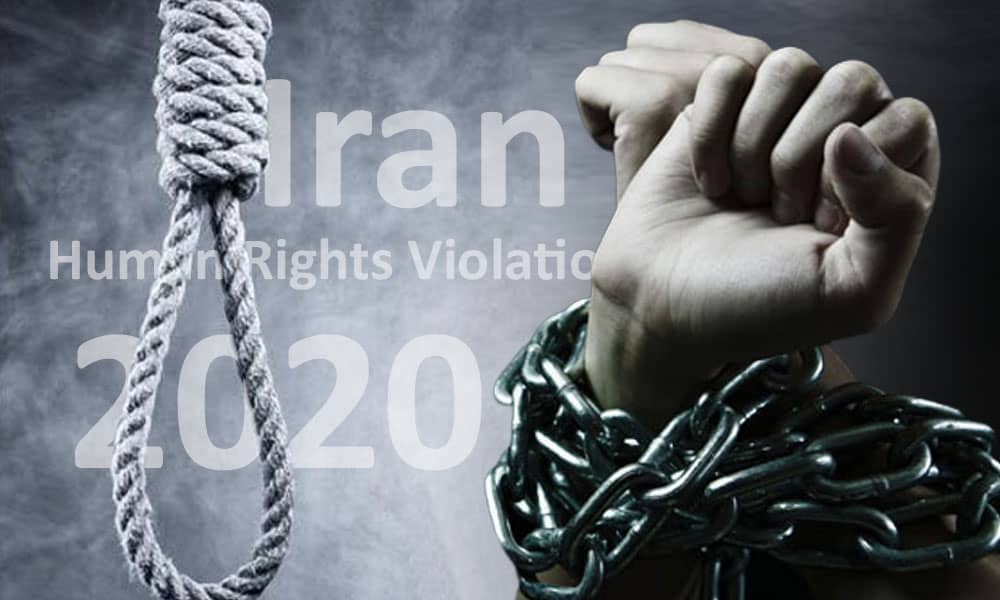 The people of Iran faced rising human rights violations in different forms by the clerical regime throughout 2020. The following is a summary of human rights abuses in 2020 in Iran.

Two months after the major Iran protests of November 2019, Iranian people once again poured onto the streets. Protests erupted on January 11 when the regime’s officials confessed to downing a commercial airliner on January 8, killing all 176 passengers and crew members.

Protesters identified the entire regime as the perpetrator of this tragic incident. They once again chanted the slogans of the November protests such as “death to the dictator.”

The regime responded with brutal suppression, arresting dozens and beating protesters on the streets.

In a statement on January 15, Amnesty International wrote: “The evidence indicates that on 11 and 12 January security forces fired pointed pellets from airguns, usually used for hunting, at peaceful protesters causing bleeding and painful injuries. Security forces also used rubber bullets, tear gas and pepper spray to disperse protesters as well as kicking and punching them, beating them with batons and carrying out arbitrary arrests.”

Unlike other governments, the Iranian regime, including Supreme Leader Ali Khamenei, called the deadly Covid-19 virus a blessing and test. Since the virus entered Iran, the regime tried to cover up the crisis.

The authorities announced Covid-19 arrived in Iran on February 19. But documents from Iran’s “National Emergency Organization” obtained by the National Council of Resistance of Iran (NCRI), suggested the virus had arrived in Iran as early as January 2020.

Along with using the Covid-19 outbreak and increasing its casualties through inaction, the regime launched a “door to door” campaign, for so-called “separating infected people” from others. This plan, carried out by the repressive Revolutionary Guards (IRGC), was a desperate measure to further oppress society.

The regime’s deliberate inaction and mismanagement of the pandemic has resulted in over 195,000 casualties, according to reports tallied by Iran’s main opposition, the People’s Mojahedin Organization of Iran (PMOI/MEK).

The Iranian regime continued to arbitrarily arrest social and political activists. One of the most notable cases was the arrest of Amir Hossein Moradi and Ali Younesi, two elite students, in April 2020 for having alleged connections with the opposition People’s Mojahedin Organization of Iran (PMOI or MEK).

Younesi and Moradi are under physical and psychological pressure to make forced confessions. The Iranian regime has been using violent measures to extract forced confessions from prisoners, later using it against them.

On May 12, and July 1, 2020, Amnesty International called for the immediate and unconditional release of Ali Younesi and an end to the torture and mistreatment of this elite student.

Iran Human Rights Monitor (Iran HRM), a renowned rights group, recorded at least 260 arbitrary arrests in November. The regime arrested these people for their participation in the November 2019 uprising.

The regime has also continued torture and ill-treatment of prisoners, particularly political prisoners and detained protestors of the November 2019 uprising.

In a shocking report, “Trampling Humanity” published in September, Amnesty International revealed horrific accounts of torture and execution against the detained protesters of the 2019 uprising.

“Amnesty International has investigated the actions of the Iranian authorities against those arrested in connection with the protests and concluded that they committed widespread patterns of serious human rights violations, including arbitrary detention, enforced disappearance, torture and other ill-treatment, and flagrant breaches of the right to a fair trial,” read the report.

The Iranian regime continued its use of medieval and inhumane punishments in 2020. In September, the regime’s judiciary branch in Urmia, northwest Iran, sentenced four men to have four fingers amputated each. While the IRGC dominates Iran’s economy and the regime plunders the national wealth, the regime’s judiciary issues harsh sentences for petty crimes, such as thievery.

Dozens of political activists were also lashed, along with many ordinary citizens. A recent case is the flogging of Davoud Rafii, a worker who used to work at Iran Khodro car manufacturer. When he peacefully protested his dismissal, due to his participation in a protest in 2012, he was sentenced to flogging for insulting the Labor Minister. He was flogged 74 times in November 2019.

On October 24, a video circulating on social media showed two police officers beating a man on the street. The voice on the video says twice that the police shot the man before beating him. The victim was identified as Mohsen Min Bashi.

A few days earlier, Mehrdad Sepehri, a 30-year-old man was tortured in public by the police in Mashhad, northeastern Iran. His family said he suffocated from pepper spray on the way to the hospital and died.

In the most recent case, the border security forces shot a border porter in Salmas County in Iran’s northwestern region. The victim was identified as 41-year-old Farzad Saaduzadeh, a married father of three.

Some of these executions are as follows:

The regime executed at least aight women in 2020, bringing the number of women executed during the Presidency of Hassan Rouhani to 111. On July 8, the regime savagely hanged a man charged with “consumption of alcohol” in the Central Mashhad Prison, northeastern Iran.

Iran under the mullahs’ regime continues to rank first globally in terms of executions per capita.

The regime’s incessant human rights violations have been condemned 67 times by the United Nations. The most recent UN condemnation of grave and systematic violation of human rights in Iran was on December 16.

Welcoming the adoption of the 67th United Nations resolution, Mrs. Maryam Rajavi, President-elect of the NCRI, said that the main perpetrators of the atrocities mentioned in this resolution are those who have been continuously involved in crimes against humanity during that past four decades, particularly the massacre of political prisoners in 1988 and the brutal suppression of the November 2019 uprising that leftover 1,500 protesters killed and 12,000 arrested.

As Mrs. Rajavi underlined, the regime will continue its human rights violations. Since the regime’s judiciary is controlled by mass murderers, such as its Chief Justice, Ebrahiam Raisi, there is no surprise that the human rights situation in Iran has deteriorated.

Raisi and other top officials in the regime, including the Minister of Justice, Alireza Avaei, were members of the notorious “Death Commissions,” in charge of massacring over 30,000 political prisoners in 1988.

This unpunished crime against humanity has emboldened the regime to continue its human rights violations, with the perpetrators enjoying systematic impunity.

On December 7, the European Union adopted a new global sanctions regime against human rights violators. The EU’s foreign policy chief, Josep Borrell, on December 10, said: “When serious human rights violations happen, the EU must go beyond adopting resolutions and making statements. We must be able to act.”

In a letter published in December 2020, seven UN experts called the 1988 massacre “crimes against humanity” and asked for an international investigation. In their letter, the UN experts also underlined that “The failure of these [international] bodies to act had a devastating impact on the survivors and families as well as on the general situation of human rights in Iran and emboldened Iran to continue to conceal the fate of the victims and to maintain a strategy of deflection and denial that continue to date.”

The regime flagrantly violates the fundamental rights of the people of Iran in all political, social and economic respects, and it must be rejected by the international community.

But despite Iranian regime’s incessant human rights violations, the EU continues its financial realtions with Tehran. In other words, the EU’s actions contradict its own humanitarian values and the recent global sanctions regime.

As the Iranian Resistance has repeatedly said, the international community should hold the regime’s leaders to account for the ongoing crimes against humanity. The United Nations Secretary-General and other human rights organizations should intervene immediately to stop the executions, secure the release of prisoners, and prevent a major humanitarian catastrophe in Iran. The EU, as Mr. Borrell at least said in words, should go beyond resolutions and condemnations. The EU should blacklist all the regime’s leaders for human rights violations and honor its human rights standards by making any relationship with Iran contingent on a halt to human rights violations.